There’s a very disturbing scene in the first half of Maleficent; one of the most disturbing I can recall seeing in a modern movie rated PG.   (Spoilers ahead) The title character, embodied with regal menace by Angelina Jolie, is sitting in the woods with who, up until this point, has been her One True Love.  At the request of the king, who was wounded by the horned fairy in an earlier skirmish near the border of their two realms, this man drugs Maleficent on their date so he can chop off her wings.  For a movie that aims to rewrite the squeamish gender politics of the 1959 Disney cartoon, a scene like that becomes even more disturbing because of the kid-friendly rating.

Jolie dominates the movie from the moment she flies on screen.  Director Robert Stromberg gives her every opportunity to glare, smirk and otherwise chew through the mediocre screenplay.  This is a Disney-fied take on the Oz update Wicked, retelling the story of Sleeping Beauty so that the villain’s motives are sympathetic.  However, her screen presence clashes violently with the overly whimsical Elle Fanning, who plays Aurora.   This is even more noticeable because Maleficent and Aurora’s interactions are at the center of the story here.  There is a scene where Maleficent’s brooding by a forest pond at night while nearby, neon rainbow fairies dance around the cursed teen princess while she violently giggles.

In that crucial cursing scene, Stromberg creates an almost identical real-life staging of the cartoon.  Maleficent storms through the castle’s main hall as the “good” fairies bless the newborn princess.  Jolie is at her menacing, over-the-top best here, making her former flame (now the king) quake in his boots and beg for her not to curse his daughter.

As that king, Sharlto Copley isn’t in the same league as Jolie.  Her sinister inflections add an odd calm to the CGI overkill.  His obnoxious performance is only matched by the trio of young fairies that raise Aurora after the curse.  This was especially disheartening given that two of them are played by Lesley Manville and Imelda Staunton, two incredible actresses who are given only tired, broad comedy scenes here.

Much like Wicked, perspective is this movie’s subject and knowledge of the original story (or in this case, the Disney cartoon of the original story) is key to appreciating it.   The many, varied contradictions further damper that appreciation. The boisterous performances of Copley, Fanning, et al don’t mesh with Jolie or the pensive, steady way Stromberg tries to tell much of Maleficent’s story.  Action sequences that bookend the movie competently illustrate the industrial patriarchy versus Mother Nature conflict, but also feel at odds with the tone of everything in between.  Maleficent rests on the horns of its star, and nearly every single other aspect undermines that.

Benito Mussolini and the exploits of Fascist Italy are criminally underfilmed in the annals of WWII films when compared to Hitler’s Nazi regime.  Because Mussolini took a back seat, his atrocities appear to somehow be less atrocious in the eyes of history and film.  Vincere, an astounding Italian film from Marco Bellocchio, does not show us his direct rule, but rather slims its focus on his horrendous treatment of his first wife, Ida Dalser (Giovanna Mezzogiorno).

Dalser falls in love with him from the moment she sees him challenge God in a crowded forum.  It’s the beginning of his revolution, when he still had time for love between the killing.  This isn’t a movie about Mussolini, though.  This movie is about Ida, who he abandons for another woman after he goes to war.  He leaves a son and a woman scorned behind.

END_OF_DOCUMENT_TOKEN_TO_BE_REPLACED

Slicing through the frame with vintage glamor and movie star sensibility, Angelina Jolie always captures the gaze of her audience.  Whether she be in a feature film like this one or in Africa with her family, we follow her.

In Alfred Hitchcock’s North by Northwest, we follow a man who’s been mistaken for someone else on a cross-country journey of suspense with swerving trains, diving planes, and classic automobiles.  Cary Grant, as big a movie star as there ever was, plays that man.  Here it’s Johnny Depp, but you can’t help but keep your eyes on Ms. Jolie.

END_OF_DOCUMENT_TOKEN_TO_BE_REPLACED 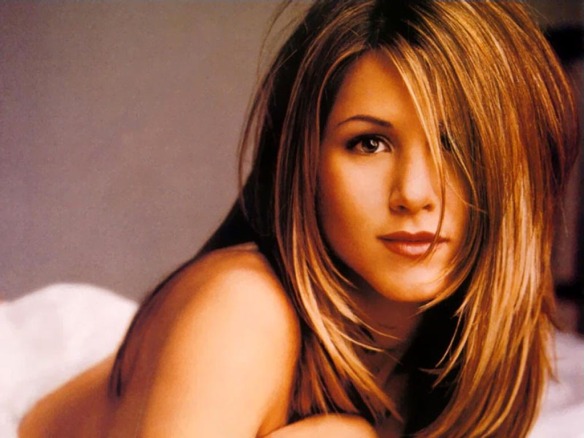 There are a few reasons Jennifer Aniston is a household name and an adored dame, and none of them have anything to do with acting. Her break came in the early 90’s from the sitcom phenomenon Friends, which followed the lives of six 20-something New Yorkers trying survive the repressions they had from their wealth families- getting higher education, being beautiful and oversexed and living in an area of economic and political stability. Aniston quickly became a favorite in the cast and a star on the big screen because of the damsel qualities she showed as Rachel Green, a color she got used to seeing in her pockets with her then-record $1 million per episode price tag plus hair product endorsements. And hair was the second thing that launched her career, influencing female style for nearly a decade and earning her the cover of every magazine in tinsel town. The fame monster grew even larger once Aniston started a relationship and married movie star and mega stud Brad Pitt. END_OF_DOCUMENT_TOKEN_TO_BE_REPLACED

As if she didn’t have enough cameras flashing on her, I’ve decided to shed even more light on the career, not private life, of one of America’s biggest obsessions.  As one-half of a Hollywood power couple, Angelina Jolie’s screen presence often takes the backseat to her personal life.  Like her husband, her career is full of impressive roles.  As I mentioned in my Salt review, Ms. Jolie seems to have two types of screen performances she excels at.  There is the emotionally charged Oscar contender, and the kick-ass action heroine.  While acclaim is shoveled upon her for the former, the latter brings home the bacon.  Jolie, like Meryl Streep, is an undeniable box office draw for the female market.  The number one success of a movie like Wanted will never be attributed to James McAvoy.  As Jolie’s career continues to grow, it will be interesting to see how she manipulates her public image and directs it towards a cause, or to making people feel something for that character on the page. Here are her current five best performances.

END_OF_DOCUMENT_TOKEN_TO_BE_REPLACED

In the age of the 3D cash-in, Hollywood has been lax on its movie stars.  Unless you call Sam Worthington, “star” of Avatar and Clash of the Titans, one, you don’t actually find many legitimate celebrities inhabiting these movies for more than a cameo.  You can say what you want about explosions and gun shots flying at you in 3D, but if you don’t have star power behind it, your movie will just be replaced by the next quick sell.

END_OF_DOCUMENT_TOKEN_TO_BE_REPLACED

Angelina Jolie typically has two types of roles.  The bad-ass action chick, a la Wanted, or the heavy dramatic roles, a la Changeling.  This summer, she will be playing more of the former, with a little of the heavy stuff mixed in.

Salt, from director Phillip Noice, seems from the trailer to be a summer action flick filled with acting talent and perhaps a plot that doesn’t suck.  The thrills in the trailer seem to be grounded in some kind of distorted realism.  Jolie appears to be playing kind of a girl Superman, hiding in broad daylight and not wearing a mask when she becomes the ass-kicker.

Liev Schreiber also stars in the movie, so it’s nice to see that Mr. Noice appears to be favoring talent over names that will just sell, though Jolie will do just that.  The trailer hits all of the normal bells and whistles when it comes to this kind of intrigue-based action/thriller.

It sets up the kidnapped boyfriend premise while interspersing some well choreographed action sequences featuring Angelina tasing some meddling policemen.  In all, it appears to be a typical summer flick, though it may end up being more or less than either of those by its July 23rd release date.

Highs: The casting, especially that of Angelina Jolie.  It’s always nice to see her throttling cronies.

Lows: No real complaints with the trailer other than it’s mundane, over-used structure.  Would it kill people to have a trailer like the one for A Serious Man?