END_OF_DOCUMENT_TOKEN_TO_BE_REPLACED

Captain America: Civil War — The third Captain America film is a stagnant if serviceable summer blockbuster buoyed by the introduction of two promising characters.  The first is Black Panther (Chadwick Boseman), a sleek, nimble force of nature who slashes his way into the film hoping to avenge a fallen loved one.   The other is Spider-Man (Tom Holland), making yet another debut after Sony and Marvel reached a deal that allows him to finally appear in the Avengers storyline.   Holland injects the web-slinging teen with a contagious earnestness, and Marisa Tomei’s brief appearance as Aunt May makes the upcoming standalone film even more promising.

Sadly, Civil War offers glimpses at more interesting movies and never really becomes one.  Focused on a feud between the title character (Chris Evans) and Iron Man (Robert Downey Jr.), the movie starts off as an exploration and critique of the massive casualty counts caused by the heroes’ world saving in the Avengers movies.  The United Nations wants to reign them in and regulate them; Iron Man agrees, Captain America does not.  Other familiar faces from the Marvel Cinematic Universe pop up to choose their respective sides, including Black Widow (Scarlett Johansson), Ant-Man (Paul Rudd) and Hawkeye (Jeremy Renner).

END_OF_DOCUMENT_TOKEN_TO_BE_REPLACED

Director Scott Cooper needs to free himself from the burden of story.  All of his movies, from Crazy Heart to last year’s Out of the Furnace to his latest, Black Mass, are set in very specific, interesting milieus and held down by their scripts’ insistence on plowing through plot points.  This is a bigger problem in Black Mass, the story of notorious Boston gangster James “Whitey” Bulger (Johnny Depp) and his fraught alliance with the FBI agent John Connolly (Joel Edgerton), because the story Cooper is telling is so vast that the movie is reduced to a series of brutal murders.

Adapted by Mark Mallouk and Jez Butterworth from Dick Lehr and Gerard O’Neill’s 2001 book of the same name, Black Mass punishes Connolly while mythologizing Bulger.  This is partially because of the built-in audience history with Depp, whose very presence makes Bulger into a movie star.  Cooper doesn’t know how to play with this idea like Michael Mann did with Depp in his 2009 John Dillinger film Public Enemies.

END_OF_DOCUMENT_TOKEN_TO_BE_REPLACED

Her name isn’t really Ricki Rendazzo.  Ricki Rendazzo is a rock star alter ego; her thick eye make-up, leather pants and gaudy jewelry are shields from life’s many and varied disappointments.  When Linda Brummel has to be Linda Brummel, like when she hands her ID to a security guard outside her ex-husband’s wealthy suburb,  she seems embarrassed and defeated, like she’s forced to break character.

To be Ricki, Linda had to give up a lot, including financial stability, her marriage and a relationship with her three children. She also has to grin and bear a job as a cashier at Total Food, a Whole Foods rip-off where people routinely spend as much on food as she makes in a week. Is all of this worth it?  Does playing nightly at a California dive bar to a small crowd that loves you really count?

END_OF_DOCUMENT_TOKEN_TO_BE_REPLACED

I love Tig Notaro.  I became a fan in March 2011, when I saw her perform as an opening act for Sarah Silverman at The FIllmore in Detroit.   She did an extended bit about the Spanish phrase “no moleste,” and sold t-shirts in the lobby that said that after the show.  More keenly than her act, though, I remember how she wound through the audience during the Q&A period with Silverman that ended the night.  Even then, her distinct deadpan did not relent, and the way she said “Yeah, I have another question,” before she allowed the audience member to speak, as if she were disdainful of the entire concept, made me laugh almost as much as her set.

Just over a year later, Notaro’s comedy exploded back into my life.  I saw Louis C.K. tweet out that she had performed one of the handful of masterful routines he’d seen in his life at the Largo in Los Angeles; I remembered her name and sought it out.  There were articles and ecstatic reviews, but no video (the Largo doesn’t allow photos or video).  Thankfully, audio of the set was recorded and C.K. eventually made it available to buy on his website.

END_OF_DOCUMENT_TOKEN_TO_BE_REPLACED 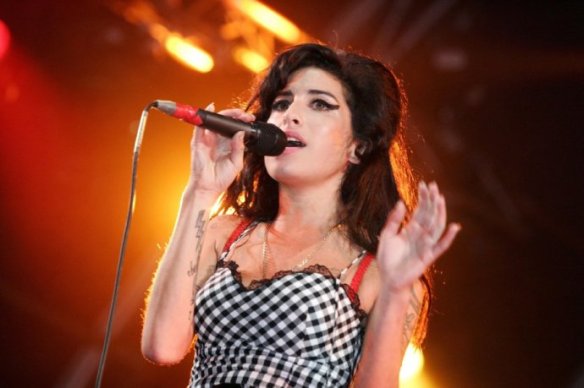 In Amy, the tumultuous life and untimely death of the singer Amy Winehouse is chronicled in an onslaught of images both high and low-res.  Though she was an old soul, early in life she descended into a fatal addiction to drugs and alcohol, all during the rise of the smartphone. Director Asif Kapadia uses the plethora of video and still images of Winehouse’s decline to show a woman surrounded by sharks.

Many of those sharks– the paparazzi, her boyfriend-turned-husband Blake Fielder-Civil, a camera crew hired by her father Mitch Winehouse– are the ones recording the footage Kapadia uses, which makes watching the end product a kind of double-edged sword.  Would such an intimate, affecting portrait be possible without these monsters?  A particularly disturbing passage comes when Winehouse goes to rehab with Fielder, something that a doctor interviewed for the documentary says never should have happened. Fielder films her as a friend does her hair, asking her to sing an updated version of her hit single “Rehab.”  He wants to hear her say “Yes, yes, yes,” to admit defeat in front of the camera and reverse the defiant “No, no no” of the song’s chorus.

END_OF_DOCUMENT_TOKEN_TO_BE_REPLACED

Yes, of course the extra, extra large sequel to Magic Mike is overflowing with washboard abs, man-thongs and sexy, sticky dance numbers.  It contains scenes of near orgiastic excess featuring Channing Tatum, Joe Manganiello, Matt Bomer and many others,  but XXL is also more about audience participation than its predecessor.  It’s the pleasure in the (on-screen) crowds- their wide grins, frantic eyes and nervous laughter- that is a big part of what makes the movie such a contagious, refreshing burst of joy.

Much of XXL focuses on Mike (Channing Tatum, as effortlessly charismatic as ever) taking a spontaneous vacation from his now-successful furniture design business to road (s)trip to a male stripper convention in Myrtle Beach with some of the key players from the first movie.  Taking the club away from them provides the movie with an electrifying freedom.   Almost everything that ties them to that movie’s world- cell phones, old costumes, conflict – is thrown out the window here, often literally.

END_OF_DOCUMENT_TOKEN_TO_BE_REPLACED 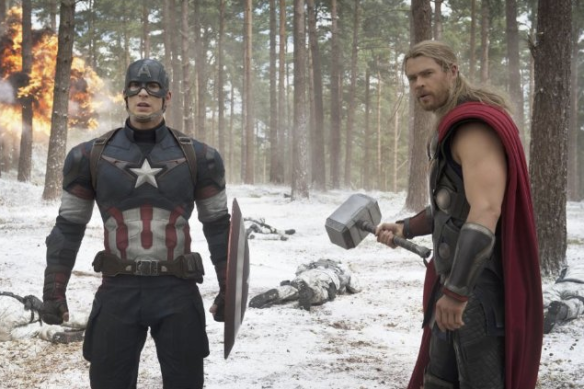 The Avengers: Age of Ultron — There are too many Avengers in this latest installment and not enough interesting ones, kind of like Marvel movies.  Joss Whedon did an admirable job of meshing the clumsy super hero universes in the first Avengers, even if the movie itself ultimately felt bland and overdone.  Whedon’s knack for playing off the different screen personas of his stars can’t save the overstretched Age of Ultron, though.  Almost every element of this latest installment, from the story to the obnoxious editing during the action sequences, induces an unpleasant amount of whiplash.  Ultron somehow manages to be both overwhelming and boring; too sanitized and controlled to do anything but occasionally amuse.

Thor, Captain America, Hulk, Iron Man, Black Widow, et al. don’t work nearly as well together on screen as they did the first time, and the verbal wit from the first movie is in much shorter supply.  For every good scene like the one where the other characters try (and fail) to lift Thor’s hammer, there seem to be two or three lengthy, generic combat sequences with the dull turd of a villain.  (I do give James Spader credit for bringing at least some mischief to the voice of the rogue A.I. Ultron, though).  At this point Marvel movies can barely keep my attention as stand-alone installments, so I don’t anticipate my headache getting any better when the next Avengers rolls around. Grade: D+

END_OF_DOCUMENT_TOKEN_TO_BE_REPLACED 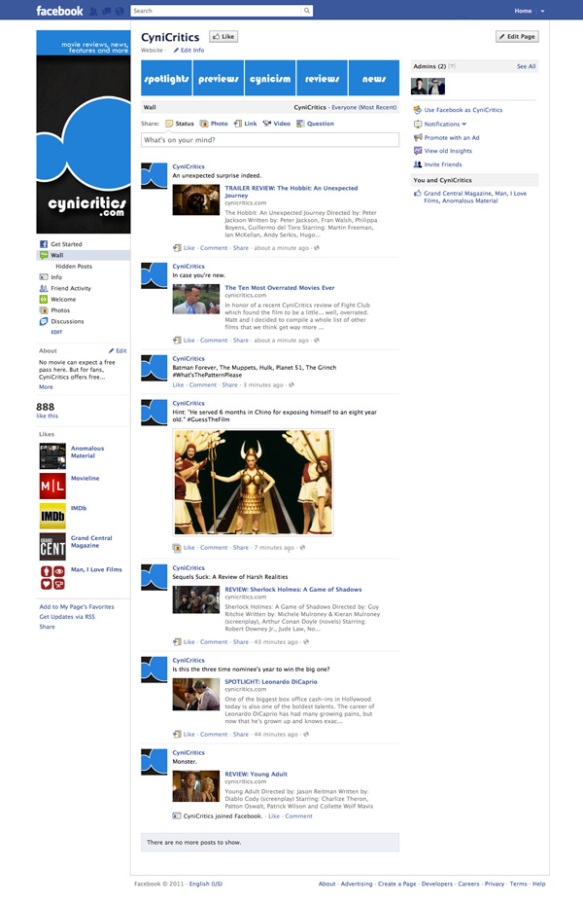 CyniCritics
Create a free website or blog at WordPress.com.