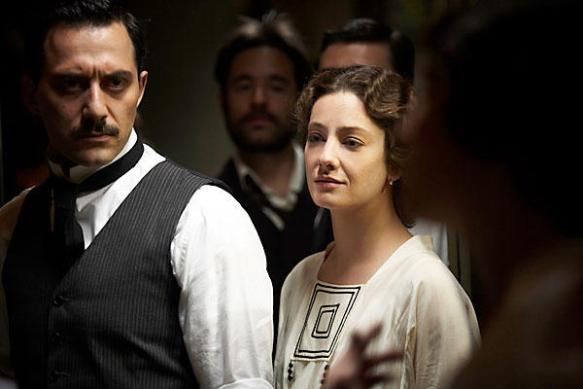 Benito Mussolini and the exploits of Fascist Italy are criminally underfilmed in the annals of WWII films when compared to Hitler’s Nazi regime.  Because Mussolini took a back seat, his atrocities appear to somehow be less atrocious in the eyes of history and film.  Vincere, an astounding Italian film from Marco Bellocchio, does not show us his direct rule, but rather slims its focus on his horrendous treatment of his first wife, Ida Dalser (Giovanna Mezzogiorno).

Dalser falls in love with him from the moment she sees him challenge God in a crowded forum.  It’s the beginning of his revolution, when he still had time for love between the killing.  This isn’t a movie about Mussolini, though.  This movie is about Ida, who he abandons for another woman after he goes to war.  He leaves a son and a woman scorned behind.

The greatness of Vincere is that it sympathizes with no one.  Ida Dalser is turned on by Mussolini’s iron will and does not deny the ideals of his fascist regime.  She wants to be beside him with their son instead of his other family.  Giovanna Mezzogiorno gives full melodramatic power to the role, channeling a woman whose passion, whether it be with love or rage, is seemingly boundless.  She’s thrown into a mental hospital for claiming her son belongs to Mussolini.  Bellocchio puts her through the vicious paces of history much like Angelina Jolie in Changeling.

The entire film is an assault of imagery, often bombarding the screen with Italian newspaper headlines and historical footage.  Bellocchio is not content with merely showing old reels in place of actual footage, though.  He uses it as part of his grand opera, and it’s the best use of archival footage this side of documentary.  Early in the film, Mussolini (Filippo Timi) hops out of bed with Ida and walks out onto a balcony to face an empty city street, where it then cuts to news reel footage of a crowd of thousands cheering.  The cutting back and forth between these two images with the grandiose score thrillingly shows this egotist’s monstrous vision of the future.

Sadly, Timi’s Mussolini disappears from the film after the first third.  He gives a performance that had potential to be equally thrilling as that of Mezzogiorno’s, but it would’ve expanded the film’s focus past its historical confines.  Thankfully Timi reappears later as a grown version of their son, bringing his electricity to a different character.  However, the early scenes between Mussolini and Dalser are unmatched in the rest of the film, even if the story is still consistently engaging.  It drags through the institution scenes a little bit too sluggishly, but for the most part Benocchio uses his operatic scope to serve the purpose of his largely intimate story.  In other words, he does what the movies are supposed to do.

Few American WWII films are as honest about their subject matter in the way that the Europeans are.  European films about the war are visceral self-critiques, often with complicated protagonists instead of do-no-wrong Tom Hanks types.  Vincere is a thrilling addition to the ranks of great films about WWII because it takes the turmoil and agitation of one woman and projects it onto the entire human condition.  She was deemed crazy at a time when she really wasn’t, just like her country.