1. The Irishman- Martin Scorsese’s mob epic is an electrifying and ultimately devastating portrait of memory and moral decay. The decade-spanning tale is told from the perspective of Frank Sheeran (Robert De Niro), a meat truck driver who lies, robs and kills his way up the mafia ladder before finding himself as a right-hand man to the infamous union leader Jimmy Hoffa (a livewire Al Pacino). De Niro, Pacino and Joe Pesci (who came out of retirement to deliver perhaps his finest performance here) play their characters at every age through the movie, which required the use of a de-aging technology to make them appear as younger men. The transformation is particularly stunning for De Niro, not only because he convincingly plays the central character from ambitious family man to his later days alone in a nursing home, but because it adds to the unreliability of his character’s point of view. No matter how effective the de-aging is, you’re always looking at De Niro, and The Irishman ultimately comes off as the tale of an old man rummaging through his past for scraps of glory and stumbling onto emptiness.

2. Her Smell- Elisabeth Moss continues to prove she’s one of the greatest actresses of her generation in Her Smell, her third and (so far) most electrifying collaboration with writer/director Alex Ross Perry. Divided into five extended scenes, each a day in the life of punk rocker Becky Something (Moss), Her Smell is a story of addiction and recovery that is by turns claustrophobic, ruthlessly uncomfortable and, ultimately, incredibly moving. The scene where a newly sober Becky sings Bryan Adams’ “Heaven” to her young daughter is one of the single most shattering of the year. 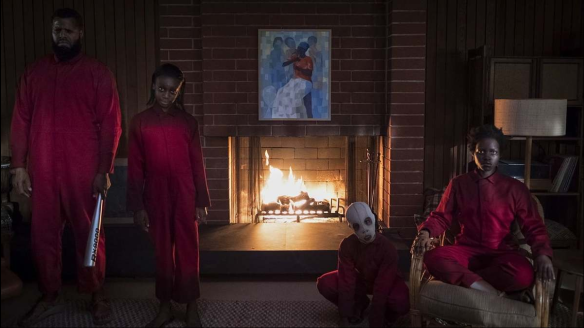 3. Us- Jordan Peele’s follow-up to his smash hit Get Out is decidedly stranger and more audacious, if no less entertaining. Us begins with a little girl named Adelaide wandering away from her family at a coastal carnival, making her way into a mirror-filled funhouse where she encounters a reflection that doesn’t mimic her. Cut to nearly 30 years later, and Adelaide (Lupita Nyong’o, in one of two excellent performances she gives here) and her family are returning to the area for a family vacation, memories of that encounter with a lookalike and its aftermath bleeding into the present. It’s not long before an entire family of red-jumpsuit-wearing doppelgangers breaks in and holds them all captive, but why? Us seemed fairly straightforward if still quite thrilling on first watch, but its mythology becomes richer and more open-ended on subsequent viewings. 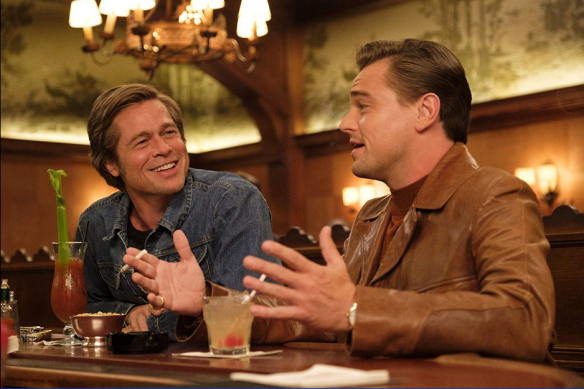 4. Once Upon a Time… in Hollywood- Quentin Tarantino’s ninth (and, allegedly, second to last) film may be his most relaxed and confident, luxuriating in its immaculate recreation of L.A. circa 1969 as seen from the vantage point of various people inside, outside and somewhere on the periphery of show business. Focusing primarily on the friendship between the borderline-washed-up actor Rick Dalton (Leonardo DiCaprio) and his stuntman Cliff Booth (Brad Pitt), Once Upon a Time… in Hollywood follows them through awkward dinner meetings, bungled set visits and drunken nights out (and in). Tarantino also weaves in a third principle character, Dalton’s next door neighbor Sharon Tate (Margot Robbie), whose presence lends the movie a disarming sense of generosity.

5. Parasite- Bong Joon-ho’s Parasite is a relentless and often relentlessly funny upstairs/downstairs thriller that balances perfectly-calibrated performances with razor-sharp plotting. Telling people to see it without hearing anything about the plot became a kind of running joke this year on Twitter, but that doesn’t make it any less true. Rather than focus on Parasite’s breathlessly executed twists, I’ll say that Bong and his cast also accomplish the task of effortlessly baking memorable character details into them.

6. Homecoming: A Film by Beyoncé- Maybe the most purely entertaining film of the year, Homecoming is a jaw-dropping concert documentary that showcases Beyoncé operating at the peak of her power. Her two-night performance at Coachella in 2018 was a career-spanning tour de force with guest appearances by her husband Jay-Z, her sister Solange as well as a Destiny’s Child reunion. Homecoming would have been great as a linear highlight reel, but one of the real treats is the playful way it jumps between the nights mid-performance.

7. High Life– Claire Denis’ space odyssey is focused on Monte (Robert Pattinson), a man who is part of a group of convicts sent away from Earth to be part of a reproductive experiment. As with many of Denis’ films, High Life jumps liberally between time periods, one where Monte is alone on a spaceship with a baby girl and the other where he and other crew members are subjugated by a sinister doctor (Juliette Binoche). As her mission grows increasingly futile, she and the crew members become prone to acts of depravity that become more and more frequent. Meshing these scenes with ones that show Monte desperate to create some kind of normalcy for his daughter yields a film of profound extremes: wonder and despair, tenderness and brutality.

8. Dark Waters- It is a high compliment that Dark Waters succeeds at making dirt and water menacing. Todd Hayne’s legal thriller focuses on a corporate defense attorney Robert Bilott (Mark Ruffalo) and his decade-plus battle with chemical behemoth DuPont. Much of Dark Waters is fairly straight-forward, but as the scope of BIlott’s case widens to include not only a farmer (the hauntingly great Bill Camp) who alleges his land and livestock are being poisoned but much of the West Virginia town where he lives, Haynes lingers on the devastating human toll of the legal roadblocks and the seemingly futile effort of going toe-to-toe with a giant corporation.

9. A Beautiful Day in the Neighborhood- The Mr. Rogers of A Beautiful Day in the Neighborhood is an exacting, mystical presence. The movie is even structured around this, having Rogers set up the story and comment on it as if it were playing out as segments on his children’s television show. As embodied by Tom Hanks, he is cautious and deflective, prone to wise digressions when asked personal questions. As you can imagine, this would be very frustrating for a journalist, and it’s exactly that tension that makes Marielle Heller’s film a compelling and often insightful drama. Heller stretches out the conversations between Rogers and Esquire reporter Lloyd Vogel (Matthew Rhys), emphasizing Hanks’ silence and the hesitant looks on Rhys’ face as he tries to avoid becoming the interviewee.

What You Gonna Do When the World’s On Fire?