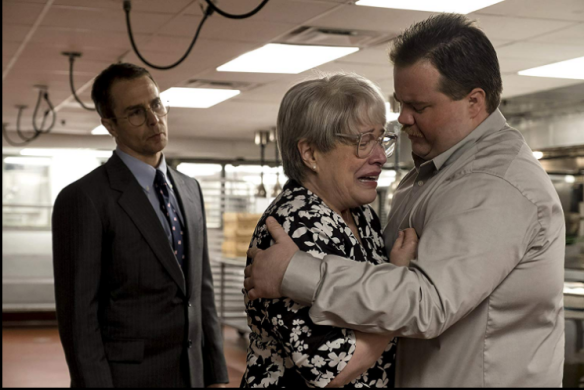 Richard Jewell- Clint Eastwood’s latest, about the security guard caught up in the Centennial Park bombing during the 1996 summer Olympics in Atlanta, is infuriating on several levels. It is a perfect fit for late-period Eastwood, a study of a man who performed an act of everyday heroism only to wind up entangled in sinister, complex bureaucracies. Richard Jewell (Paul Walter Hauser) was an AT&T security guard who was hailed as a hero after helping clear people away from the bomb, only to then be vilified after it leaked that he was being investigated by the FBI as a prime suspect in planting the bomb.

The Jewell of Eastwood’s film is reverent of law enforcement to an increasingly uncomfortable degree, and Hauser is devastating when conveying the conflicting emotions at play as his character tries to be deferential to the authorities as they openly mock and try to lock him up. Equally devastating is Kathy Bates as Jewell’s mother Bobi; she is great at showing how uncomfortable and horrified the character is with the intrusiveness of the investigation and the media spectacle.

Richard Jewell has generated quite a bit of controversy for its portrayal of Kathy Scruggs, the late Atlanta Journal-Constitution reporter who broke the story about Jewell being a focus of the FBI investigation into the bombing. Olivia Wilde gives an energetic, determined performance as Scruggs, but the role is incredibly poorly written and falls prey to an unsettling trope about on-screen female journalists sleeping with their sources. As a study of a man in the claustrophobic death grip of weaponized governmental institutions, Richard Jewell is exceedingly effective. When it ventures outside of that story, though, it is decidedly weaker. Grade: C+ 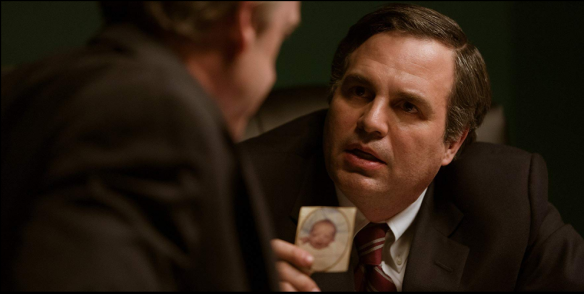 Dark Waters- It is a high compliment that Dark Waters succeeds at making dirt and water menacing. A story of corporate malpractice hiding in plain sight, Todd Haynes’ film begins in the 1970s with three teenagers sneaking over a fence at night with beer to take a swim in a pond. Two men in a boat flash a spotlight on them and send them packing, then proceed to spray the water with an unknown chemical. One of the men tells the other to cut the light, giving the impression that they want their work to remain secret.

The movie hops ahead to the late ’90s, when an impassioned farmer (a hauntingly great Bill Camp) barges into a Columbus, Ohio law firm with a box of VHS tapes and demands to speak with Robert Bilott (Mark Ruffalo). He tells him about how the chemical company DuPont has poisoned his land and livestock and demands that he take on his case. Bilott, whose firm is typically on the other end of corporate lawsuits, at first dismisses the man, but because his grandmother referred him, he decides to go check out the land for himself. He sees a field with dozens of cow graves and a creek scattered with rocks that glow an eery white from chemical deposits and decides to take it.

Much of Dark Waters is a fairly straight-forward legal thriller, but as the scope of BIlott’s case widens to include not only the farmer but much of the West Virginia town where he lives, Haynes lingers on the devastating human toll of the legal roadblocks and the seemingly futile effort of going toe-to-toe with a giant corporation like DuPont. The movie is so bleak and sunless that when it cut to a close-up of pink flowers being clipped in a garden, breaking up the gray skies, earth tones and washed-out law office interiors, I gasped. Again, that’s high praise. Grade: B+ 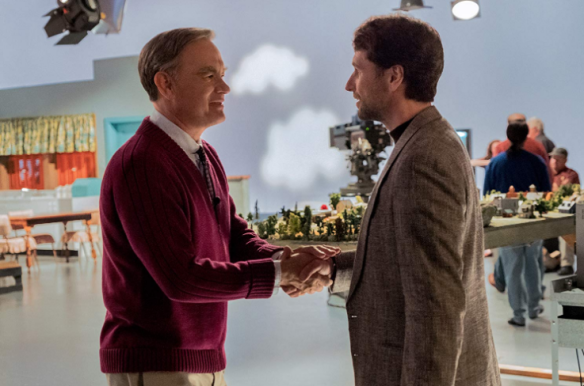 A Beautiful Day in the Neighborhood- The Mr. Rogers of A Beautiful Day in the Neighborhood is an exacting, mystical presence. The movie is even structured around this, having Rogers set up the story and comment on it as if it were playing out as segments on his children’s television show. As embodied by Tom Hanks, he is cautious and deflective, prone to wise digressions when asked personal questions.

As you can imagine, this would be very frustrating for a journalist, and it’s exactly that tension that makes Marielle Heller’s film a compelling and often insightful drama. When Esquire writer Lloyd Vogel (Matthew Rhys) is ordered by his editor (emphasis on ordered) to write a 400-word blurb on Fred Rogers for the magazine’s upcoming issue on “heroes,” he makes no effort to hide his disdain.

Vogel’s skepticism about Rogers seems to be the exact thing that draws the stoically chipper host to him. Every time Vogel attempts to probe beyond the surface, to find some kind of difference between the man and the television character, he finds Rogers calmly flipping the script and asking about him. Heller stretches these conversations out, emphasizing Hanks’ silence and Rhys’ face washing over with hesitation as he reluctantly shares personal details to his character’s interview subject. Everyone around Rogers seems to be in a rush to make deadlines, but he has a way of slowing the world down to his pace. Heller’s movie is less about knowing him then it is about the question of knowability and celebrity itself.

It is also, to a sometimes less engaging degree, about Vogel’s tumultuous personal life; he and his wife Andrea (Susan Kelechi Watson) have a newborn baby, and his long-absent father (an excellent Chris Cooper) is trying to insert himself back into his life. These elements don’t bring the movie down as much as highlight how astonishing and strange the scenes with Rogers and Vogel are. Just as Mr. Rogers does, Heller finds bits of profundity in the predictable struggles of the everyday. Grade: B