David Lynch’s Mulholland Dr. seeks to do nothing less than redefine cinematic narrative.  By playing off expectations- those that precede dread and anticipate desire- he creates a hallucinatory dreamscape that, like many dreams, is populated with familiar people, repeated locations and maddening symbolism.

Figuring out what a dream means is a common point of relation among people, though producing that experience on a film and draining it of the personal angle of a friend or family member makes Mulholland Dr. quite a challenging experience to interpret, especially on only one viewing.  We’re being tasked with interpreting the dream of someone we do not know.

END_OF_DOCUMENT_TOKEN_TO_BE_REPLACED

Goodfellas is a film in which everyone is doing the best at what they do best.  Alongside Taxi Driver, it is Martin Scorsese’s most undisputed masterpiece for several important reasons.  The most prominent reason is Scorsese’s technique, which is now one of the most easily identifiable “auteur” signatures.  From his use of rock music to the way his camera bobs, ducks and weaves alongside these mobsters, he defines the world they live in in almost every capacity.

END_OF_DOCUMENT_TOKEN_TO_BE_REPLACED

From a modern perspective, this monologue by Albert Brooks in the last third of James L. Brooks’ Broadcast News is cringe-inducing, because it became true:

“What do you think the Devil is going to look like if he’s around? Nobody is going to be taken in if he has a long, red, pointy tail. No. I’m semi-serious here. He will look attractive and he will be nice and helpful and he will get a job where he influences a great God-fearing nation and he will never do an evil thing… he will just bit by little bit lower standards where they are important. Just coax along flash over substance… Just a tiny bit. And he will talk about all of us really being salesmen. And he’ll get all the great women. ”

END_OF_DOCUMENT_TOKEN_TO_BE_REPLACED

It’s hard to weigh the merit of a movie like Pulp Fiction.  Quentin Tarantino’s bloody chat-fest had a sudden and immediate impact on the landscape of American film, yet it’s still young in the eyes of the art form.  It is a classic like all those old movies you associate with that word (some of which it references), yet it’s filled to the brim with sleaze.

Pulp Fiction forges its story of fragments of other movies, most of which wouldn’t have made it past the cutting room floor.  There are heated exchanges about fast food in Europe, riffs on the sexual nature of foot massages and lengthy discussions on what a television pilot is.  All of those happen in the first scene that hit men Vincent (John Travolta) and Jules have together.

After a similarly chatty opener where two lovebirds decide to rob a diner, these two hit men banter back and forth.  Much has been made of the highly stylized dialogue, so much so that these types of conversations have earned this director his own label: “Tarantinoesque.”

END_OF_DOCUMENT_TOKEN_TO_BE_REPLACED 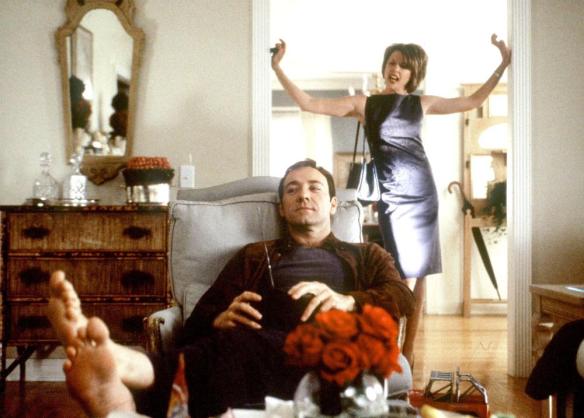 That’s not even the biggest reason American Beauty defies the Academy, though.  At almost every chance the voting members get, they favor superficial uplift over true grit.  Yet when you look closer at this movie (as its tagline instructs you to do), you see that there is no happy ending, at least not in the traditional Best Picture sense.  Lester Burnham (Kevin Spacey) really does die like he says he’s going to in the beginning.

Movies that blatently tell you their outcome are usually more surprising than ones with a big reveal at the end.   Sometimes knowing the conclusion is more baffling than not.  How can a man who’s already dead die, and why will we care?

END_OF_DOCUMENT_TOKEN_TO_BE_REPLACED 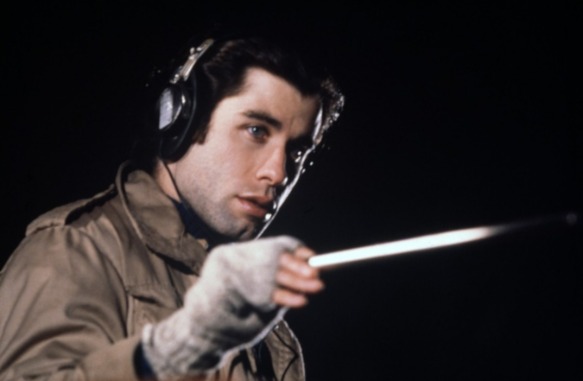 It’s sad that Blow Out, perhaps the finest film I’ve seen from the 1980s if not certainly one of the top five, is a forgotten relic of that decade.  Director Brian De Palma is known more for 1983’s Scarface, which looks like child’s play compared to this masterpiece.  John Travolta is known for fading into obscurity until Pulp Fiction, yet in this film he gives his greatest performance.

In a decade where the political propaganda of Top Gun and the teen angst of John Hughes’ films are the lasting impressions of American cinema, it’s easy to see how a film like Blow Out that uses a dominant color palette of red, white and blue in a story of political corruption and murder, would fade away.  Thanks to those people at The Criterion Collection, it has resurfaced and been redistributed for the generation that missed it so they can get swept up in its mastery.

END_OF_DOCUMENT_TOKEN_TO_BE_REPLACED

Stanley Kubrick never made an original movie.  What he did was take works of literary fiction and make them his own, whether it was altering the plot altogether (most prominently in The Shining) or simply telling a story visually.

In the case of the latter, he was one of the most gifted American directors the world has ever known.  Dr. Strangelove may be his greatest film, although Kubrick devotees each have their personal favorite.  However, I’ll ask you to consider what he did with this movie.  He made a comedy, a genre that today seems stuck in visual purgatory, that is just as much a feast for the eyes as it is for the ears.  Considering Dr. Strangelove has one of the funniest screenplays every written, that is quite an achievement.

END_OF_DOCUMENT_TOKEN_TO_BE_REPLACED

When we first started this site, Luke and I decided to only review movies that were newer and try to stick with the 21st century without  going further back than 1999.  Of course we watch dozens of movies each year that go as far back as the Silent Era, so we decided to create a segment of CyniCritics where we don’t necessarily review “older” movies, but instead pick out the best ones and then talk about them from a modern standpoint.  Think of it as Roger Ebert’s “Great Movies” series written by college students.  We’re starting with The Godfather, which is probably the best place to start next to Citizen Kane.  As always, we appreciate you taking the time to read our work and we like reading yours, so comment with feedback! 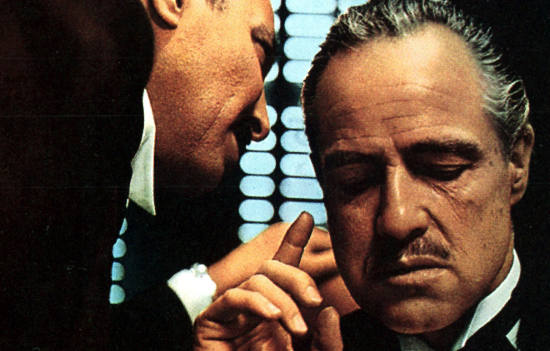 On the surface, The Godfather will always be about America by way of the Italian Mafia.  The organization is structured less like the American government and more like a corporation; a captain of industry on top and the chain of command that goes all the way down to soldiers, drivers, and errand boys.

Digging deeper, though, Francis Ford Coppola’s epic should be examined from a more basic, primal standpoint.  Because yes, Don Vito Corleone (Marlon Brando), his three sons (Al Pacino, James Caan, and John Cazale) are part of a massive criminal empire, but this story is told on a very personal level.  There’s a reason why we’re allowed to see the inner workings of all the characters.  Their traits, most specifically how they react to violence and being wronged, are what bring to light what I think is this movie’s real purpose: to show the fight between human nature and experience and animalistic instinct.