That’s not even the biggest reason American Beauty defies the Academy, though.  At almost every chance the voting members get, they favor superficial uplift over true grit.  Yet when you look closer at this movie (as its tagline instructs you to do), you see that there is no happy ending, at least not in the traditional Best Picture sense.  Lester Burnham (Kevin Spacey) really does die like he says he’s going to in the beginning.

Movies that blatently tell you their outcome are usually more surprising than ones with a big reveal at the end.   Sometimes knowing the conclusion is more baffling than not.  How can a man who’s already dead die, and why will we care?

You’ll care because the screenplay by Alan Ball, while bitingly satirical of suburban life, is still very much in love with its characters.   Condescending indie comedies of the present could learn a thing or two from Ball.   Caroline Burnham (Annette Bening) and Frank Fitz (Chris Cooper) are the most unsympathetic characters in the movie by far, but they both have scenes that are emotionally resonant.

No character is what they initially appear to be in this movie, which would be a bit of a cliche only if it weren’t true.  Many movies hint at characters’ hidden dimentions while they still remain hidden, but American Beauty drags them out into the light and puts them under a microscope.  When Caroline, a real estate salesperson, fails to sell a house, she closes its curtains and smacks herself around verbally and physically.  This comes startlingly early in the movie.  We shouldn’t be on her side because of the way Lester talks about her and what he shows us about her, yet this moment is emotionally effective because it feels true.

Lester is meant to be our guide through the suburban labyrinth of repression that he and so many other former weirdos call home.  Through his rebirth, we are not meant to see a success story, but merely a man who rediscovers his capacity for happiness (and lust for teenage girls) by redefining his life and lowering his expectations of it.  He’s happier working at a fast food joint than being a telemarketer.

Though a large portion of American Beauty hinges on the screenplay’s insistence on level-headedness, the actors are also very important.  Spacey and Bening are a warring duo for the ages, each achieving a performance that is a career high in two extraordinary careers.  Director Sam Mendes lavishes them with attention and allows them to show off their skills, but he also gives equal time to the Burnham’s daughter Jane.

At first, Jane is the typical discontent adolescent.  She is insecure about her body, hates her parents, and rarely speaks.  Her sarcasm is her armor against her mom, though she still uses it against her dad.  The movie starts out on a menacing note, making Jane look like the antagonist who will have her father killed.

This makes you reluctant to see her in a different light, but in a way that’s true of all these people.  Do we really want to see Jane’s friend Angela (Mena Suvari) as more than the stuck-up cheerleader we all knew in high school?  Is there really more to Frank Fitz, a retired Marine Colonel who hates everything not complacent with his 50s sitcom morality?  Ball wades all of the principle characters through the stereotypes he deliberately gave them and brings out the weirdo in all of them.

Lester’s journey from discontented white-collar worker back to the joys of his youth is the focal point for this weirdness, but not its sole commentator.  The other voice that emerges is Ricky Fitz- son of the colonel, drug dealer, new neighbor.  Though the first-person voice over from Lester is meant to put us in his perspective, the low-grain video footage Ricky records of the Burnhams offer decidely more bizzare shifts from that viewpoint. 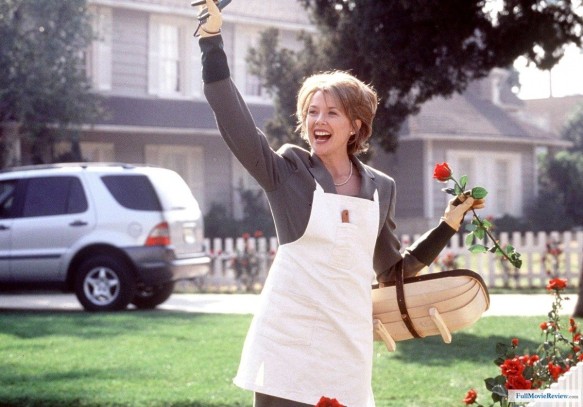 Mendes’ masterstroke as a director is in merging those two perspectives for the audience.  We see Lester strip naked and start to lift weights in his basement after he looks at his reflection.  When Ricky records it from his own vantage point, we simply see the maniacal look on Lester’s face.

Ricky and Jane signify a new perspective on success in America, while Lester and Caroline are a failed attempt at the old model of it.  This evolving model has Ricky selling marijuana to very lucrative ends.  He’s extraordinarily independent for someone who lives with his parents.  Lester is a bewildered buyer.

“When I was your age, I flipped burgers all summer just to be able to buy an eight-track,” he tells Ricky.

“No,” he says not missing a beat, “actually, it was great.  All I did was party and get laid.  I had my whole life ahead of me.”

Lester has come to terms with his mortality even if he doesn’t know it’s approaching that quickly.  His predicament could be seen on the surface as a typical midlife crisis, but if that’s all you’ve seen you haven’t been paying attention.

While American Beauty empathizes with many of its characters, Ball can’t help but have his satirical way with them, though it’s often double-edged.  Angela may utter the line “There’s nothing worse than being ordinary,” but is it untrue simply because she is saying it?  She has her own motives for saying the often bewildering things she does, but any of the other characters could’ve had that line simply because they all show it to us in their own way.

These characters’ inability to see each others’ common humanity is what has driven them apart.  Many rediscover it, some after it is too late and others while there is still time.  Hopeful undercurrents like that and the ridiculously quotable dialogue soften the inevitability that Lester will die.  His touching voice over at the end is deeply affecting but not overly-sentimental.  It is one of the few movie endings that feels truly perfect.

If ever there was a landmark comedy about the menace in suburbia, this would be it.  It is a lighter take on the material in Todd Solondz’s Happiness, but no less revealing and certainly no less rewarding.  Mendes captures the sleek surface of societal conformity, and Ball and the actors capture the unrepressable weirdness behind it.