Rian Johnson takes giant, often messy leaps in The Last Jedi, the eighth episode of Star Wars and the second in the (first) post-Disney trilogy. His take feels much more sporadic than the cautious nostalgia trip J.J. Abrams rendered in 2015’s The Force Awakens. It has higher highs and lower lows, hopping from its disparate plot lines with an often jarring inconsistency. While it has some of the series’ strongest set pieces, its clumsy narrative rhythm doesn’t allow it to breathe. As a result, its moments of visual splendor are sometimes lessened or cut short by sloppy pacing.

(No major spoilers, but the basic plot set-up is discussed ahead)

END_OF_DOCUMENT_TOKEN_TO_BE_REPLACED

Blade Runner 2049 —  It would have been interesting to see what Ridley Scott did with Blade Runner 2049. He has had mixed results with expanding the mythology of the Alien films, though having them stacked up against his near-perfect original almost seems unfair. The way he has deepened the mythology, though, by focusing on the android characters, would make his updated take on the world of Blade Runner fascinating. Comparisons between Blade Runner 2049 and the original don’t hurt the quality of either movie, though that could be because I don’t hold the 1982 film in as high regard as some of Scott’s others.

The Blade Runner universe, which focuses on the “retiring” (killing) of human-made androids called replicants, is also a good fit for Denis Villeneuve. His 35-year-later sequel focuses on Los Angeles Police Officer K (Ryan Gosling), who is tasked with hunting down older model replicants, the ones who can disobey their programming and grow to have independent thoughts. His initial retirement of a replicant who has been hiding out on a farm for 20 years leads him down a rabbit hole that challenges his perceptions of what he does and blows open much of the debate that fueled the original movie. How human are the replicants? And how much do humans ignore that to get rid of the ones labeled as rogue?

END_OF_DOCUMENT_TOKEN_TO_BE_REPLACED

It’s best to go into mother! knowing nothing about it, though if someone spoils it for you you might not believe them. (I’ll do my best not to spoil any major plot points from here on out, but you might want to stop until after you see the movie). Darren Aronofsky’s psychodrama plums the self-lacerating depths of being married to a hopeless narcissist, a popular one at that. His portrait of marriage is ruthlessly calculated, pinpointing the tremors in a woman’s face with every small betrayal by her husband. A series of disruptions to their everyday lives begins as a nervous twitch before careening over the edge of sanity into an abyss of blood and fire.

The couple at the center of the movie (played by Jennifer Lawrence and Javier Bardem), live in an isolated mansion, one too far removed from society for cell phone service but not for a landline. The woman (none of the characters are named) spends the days remodeling the house after it was nearly destroyed in a fire. Her husband is a writer supposedly crippled by writer’s block.  He often fills his time tucked away in a study gazing at odd knick knacks, like a mysterious gem he keeps on a pedestal and protects like he’s Gollum.  Sometimes he appears to just wonder off into the neighboring woods. I got the sense when the movie started that she wakes up almost every morning to an empty bed and plays a slightly sad game of hide and seek.

END_OF_DOCUMENT_TOKEN_TO_BE_REPLACED 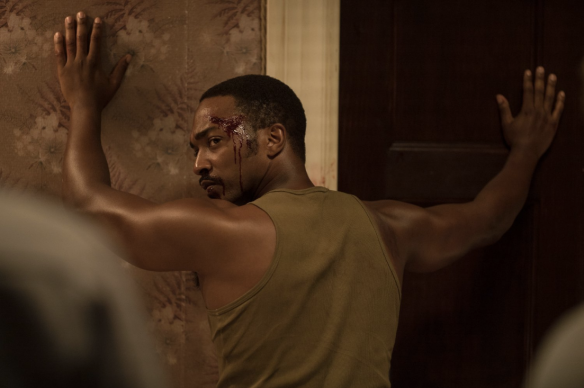 Detroit— Kathryn Bigelow’s Detroit is harrowing and infuriating, a claustrophobic tale of police brutality set against the 1967 riots in the Motor City. The movie is centered around the murder of three black men by the police at the Algiers Motel; more specifically it’s about the violent lead up to those deaths. State and city police and the National Guard swarm the complex after a man at the motel tauntingly pops off a few rounds from a starter pistol. That man is shot in the back while trying to flee, and a Detroit cop places a pocket knife next to his dying body so he can justify the killing. The rest of the people at the motel are detained and brutalized.

This is all told in squirm-inducing proximity to the carnage; Bigelow makes you feel every punch, shove and gunshot. The blunt physicality that has come to define her recent work often lends itself to unnerving suspense, especially in her 2008 film The Hurt Locker.  However, though I could feel this movie’s violence in my bones, it’s not instilled with enough historical context to elevate it much beyond that. The horror at the Algiers is bookended by sloppy segments that try and fail to broaden the movie’s focus.

END_OF_DOCUMENT_TOKEN_TO_BE_REPLACED

Dunkirk — Christopher Nolan’s World War II drama is an intense, often thrilling triptych.  Structured around British efforts to escape the beach at Dunkirk, France as the Germans inch closer and closer, the movie oscillates between characters on land, air and sea.  There are the troops stuck on the shore, desperate to get away as Nazi planes pick them off with gunfire and bombing runs. A small number of Allied planes counter the Germans, trying to minimize casualties on the ground until help arrives. The third segment revolves around a man (Mark Rylance, casually excellent) whose boat is among a fleet of British citizens commissioned by the navy to take their private vessels to go and rescue the stranded soldiers.

Each of these segments unfolds over a different timeframe, so things that happen in one of them are sometimes viewed from a different perspective later on in the movie.  Nolan skips between them liberally, and this rapid fire structure nearly always pays off.  However, there are moments that cut away too soon, dicing up scenes that would have worked better if they’d been allowed to play out a bit longer.  Dunkirk’s expansive, visceral view of war is also sometimes lessened by an overbearing score that distracts rather than enhances.

END_OF_DOCUMENT_TOKEN_TO_BE_REPLACED

Spider-Man: Homecoming — For better and worse, the rebooted-yet-again story of Spider-Man thrusts the hero into the digital age. First introduced as a DIY filmmaker enthusiastically chronicling his semi-induction into The Avengers, Peter Parker (Tom Holland) soon learns the challenges of balancing high school and super hero life. Should he use his costume to impress a crush and silence a bully?  Will his parental guardian Aunt May (Marisa Tomei, shamefully but not surprisingly under-utilized) find out why he’s sneaking out at night?

The Parker of Homecoming longs for more than thwarting ATM robbers and recovering stolen bikes. He wants to play with the big kids, though Tony Stark/Iron Man (Robert Downey Jr.) periodically shows up to remind him he’s not ready. Director Jon Watts balances the whimsical innocence of the high school portions of the movie with the slightly grave mission Spider-Man undertakes: combatting the Vulture (Michael Keaton, a manic delight), a disgruntled public works employee who steals secret technology from the military and eventually The Avengers.

END_OF_DOCUMENT_TOKEN_TO_BE_REPLACED

A playful chamber drama tinged with nervous desire, Sofia Coppola’s latest takes the director’s predilection for insular worlds to a new extreme. Her The Beguiled is a remake of sorts of a wild, pulpy 1971 film starring Clint Eastwood and Geraldine Paige and directed by Don Siegel. (Both films are based on a novel by Thomas Cullinan). The story is set in 1864 at a secluded Southern girls boarding school in Virginia, where Union soldier Corporal John McBurney (here played by Colin Farrell) is hesitantly taken in after his left leg is severely crippled in battle.

The Beguiled is not an interrogation of the broader political machinations of the Civil War. It examines white women left behind by war, a study of desire that is pent up in corsets and isolated in the woods. It does not portray slavery in any capacity, and actually removes a key character. In the 1971 film, one of the women at the boarding school is a slave named Hallie, who tends to McBurney’s wounds.

END_OF_DOCUMENT_TOKEN_TO_BE_REPLACED

CyniCritics
Create a free website or blog at WordPress.com.