In A Quiet Passion, writer/director Terence Davies and actress Cynthia Nixon see their subject, the American poet Emily Dickinson, with such disarming clarity that it can at times be difficult to watch. This is not only true of Dickinson’s declining health late in the movie, but of most of her interactions with other characters; how she latches onto a kindred spirit who shares her rebelliousness and fiery wit, only to withdraw further from the world when that woman marries, or her regular confrontations with priests and her own family about Christianity.

She knows in her bones that she does not share everyone else’s piety or the pressure to marry simply because it’s expected of her.  Dickinson defiantly accepts the label of “radical,” spending much of her life in 19th century Amherst, Massachusetts, defining exactly what that means. As portrayed here, she is an intellectual far ahead of her time, crippled by a reclusive despair because she knows how the world would treat her if she showed it who she really was. Traditional happiness is nearly always out of reach, something that Nixon, in one of the finest performances of the decade so far, displays on her endlessly crumpling face.

Dickinson is trapped in an echo chamber of loneliness and doubt, and Davies makes a point to isolate her within shots from the beginning. This is when we see the poet as a teen (played by Emma Bell) at a religious school, quietly but firmly telling the headmistress she’s unsure if she wants to be saved by God. “Your rebellion is your own, Ms. Dickinson,” the headmistress says before Emily is sent home to her family, who here and throughout the rest of the movie deal with her in a very “hate the sin, love the sinner” way.  While they kneel in prayer, a now-adult Dickinson remains seated. God knows what’s in her soul and that’s enough for her, she tells her sister.

Because the movie charts, among other things, Dickinson’s increasing recluseiveness, most of her interactions are with her family– her equally reclusive mother (Joanna Bacon), her calmly stern father (Keith Carradine), her loving sister Vinnie (Jennifer Ehle) and her brash, insecure brother Austin (Duncan Duff).  A Quiet Passion skips liberally through her life, her poetry recited in voiceover as a kind of guide to her relative emotional state. The first half of the movie is often blisteringly funny; Dickinson, and sometimes her siblings, gleefully taunt their overly devout aunt, her exasperated guffaws more pleasurable to them than laughter.

A Quiet Passion’s narrative divider is the Civil War. It draws a wedge in Dickinson’s family when Austin, intent on enlisting as a Union soldier, is shut down by their father. Davies takes a break in the movie’s central drama to briefly chronicle the war in still images, highlighting key battles like Gettysburg and Antietam and listing the number of soldiers killed in each.

Dickinson’s unraveling point, if there is any one event, is not the war, though, but a wedding. When her friend Vryling (Catherine Bailey), a sort of quick-witted, defiant template for the socially awkward Dickinson to base herself off of, gets married, it’s a betrayal of what brought them together.  In an earlier scene, when Emily is admiring her friend’s ability to shake off societal expectations, Vryling says Emily is the true radical of the two. Emily scoffs at this at first, but the slow realization that it’s true washes over her face.

After the wedding, Dickinson is rarely seen outside the house and hides away from visitors, even to the point of refusing to meet face to face with anyone other than her family members. She stands in a doorway at the top of the stairs, shouting down witticisms and rebuttals from a sad distance. Things with her brother and sister often get tense inside the cramped confines of their house (her brother lives next door with his wife but is a frequent visitor).  It all boils over when Dickinson, who rises at about 3 a.m. every morning to write, walks in on her brother cheating on his wife. She’s confronted with an overt display of sexuality that, as far as we know, she has never seen before. Her shock leads to an eruption of rage. 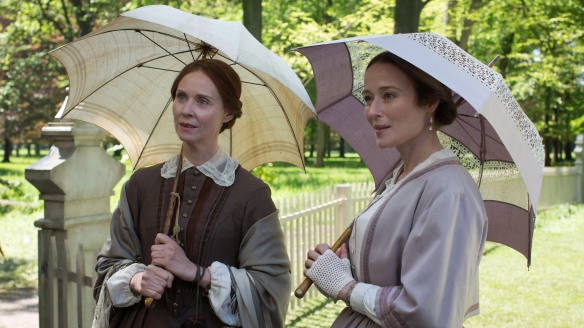 Emily and Austin’s combative arguments in the aftermath of this are painful to watch, especially a scene where he reads a scathingly sexist diatribe about female writers from the newspaper. Dickinson’s quiet retreat from the room is all the more devastating knowing how capable she is in verbal sparring. It’s also one of the few times Davies pulls away form showing her in close-up; the scene is brutal enough without it.

Davies’ portrait of Dickinson is overflowing with this kind of compassion. It’s a frank examination of a woman who knows who she is and is incapable of denying it. Her mind is ablaze with ideas, ones that she must largely grapple with herself.  “You don’t demonstrate, you reveal,” her friend Vryling tells her.

That’s something that Davies clearly identifies with as well. He said in an interview with Tribeca:

“…she was an observer. And I think I am an observer. I’m not a participant in life. And so even when you’re at your happiest, there’s a part of you that know it’s already decaying. There’s nothing more depressing than getting on a bus and looking around and wondering, One day we’ll all be dead.”

It’s no real spoiler to reveal that Davies follows Dickinson up until the very end, even going so far as to hover his camera over the empty plot where her coffin will soon be placed.  The scenes that preceded this, of Dickinson gradually succumbing to a severe, seizure-inducing kidney disease, are filmed at a similar remove as the scene where her brother reads from the paper. A Quiet Passion may at times be an unrelentingly bleak film, but it is also a deeply sympathetic and moving one. It shows despair but doesn’t wallow in it. Instead, Davies shows the remarkable artistry that can bloom in such dark, oppressive conditions, even if it wasn’t rightly admired during its creator’s life.

1 thought on “REVIEW: A Quiet Passion”