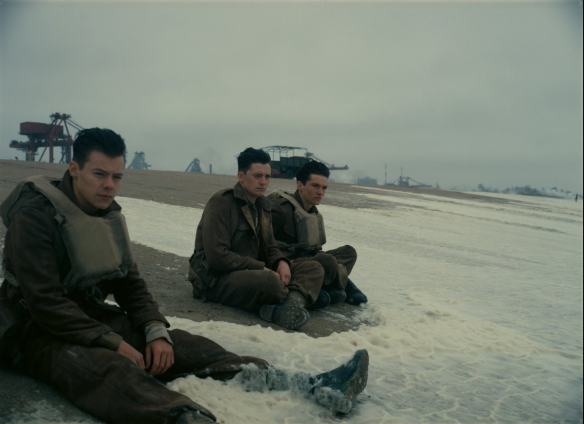 Dunkirk — Christopher Nolan’s World War II drama is an intense, often thrilling triptych.  Structured around British efforts to escape the beach at Dunkirk, France as the Germans inch closer and closer, the movie oscillates between characters on land, air and sea.  There are the troops stuck on the shore, desperate to get away as Nazi planes pick them off with gunfire and bombing runs. A small number of Allied planes counter the Germans, trying to minimize casualties on the ground until help arrives. The third segment revolves around a man (Mark Rylance, casually excellent) whose boat is among a fleet of British citizens commissioned by the navy to take their private vessels to go and rescue the stranded soldiers.

Each of these segments unfolds over a different timeframe, so things that happen in one of them are sometimes viewed from a different perspective later on in the movie.  Nolan skips between them liberally, and this rapid fire structure nearly always pays off.  However, there are moments that cut away too soon, dicing up scenes that would have worked better if they’d been allowed to play out a bit longer.  Dunkirk’s expansive, visceral view of war is also sometimes lessened by an overbearing score that distracts rather than enhances.

Despite these weaknesses, though, Nolan has made noticeable strides forward as a storyteller here. His obsession with explaining the mechanics of his stories, something that hampered his sci-fi outings Inception and Interstellar, is gone here.  Dunkirk ticks forward with relentless momentum, building a rhythm that is both disorienting and immersive. Grade: B-

War for the Planet of the Apes — What began as a promising reboot in 2011 with Rise of the Planet of the Apes has devolved more and more into self-serious mush with each subsequent installment. The strained attempts at thematic importance and political relevance in War for the Planet of the Apes overshadow everything that made that first film in this trilogy appealing. It was sharing in the spark of discovery with the rapidly evolving ape Caesar (Andy Serkis), seeing him navigate his place in the world trapped between humans and apes. His realization of his creator’s betrayal was heartbreaking, and his rallying of apes to escape from a San Francisco primate facility was exhilarating.

Though War is bigger and darker, and Caesar is older and wiser, it is also one-note and dull. The director, Matt Reeves, revels in suffering to the movie’s detriment. Much of War’s 140-minute runtime is not a literal war but one of the soul, as Caesar confronts a demented, paranoid Colonel (Woody Harrelson) who is hell-bent on eradicating the apes before they wipe out what’s left of humanity. It’s not enough to kill them though; he captures Caesar’s colony and puts them to work building a useless wall (get it?!) to keep out another, larger human army that is coming to overthrow him. He makes the others watch as he tortures Caesar, chipping away at his willpower and bringing out an all-consuming hate that fueled Koba, the ape who briefly overthrew Caesar and led an ill-fated uprising against humans in 2014’s Dawn of the Planet of the Apes.

Caesar’s inner turmoil fuels this installment. Credit must be given to the special effects team, who bring out an extraordinary expressivity in Caesar’s eyes and face. He and the other apes are marvels of digital creation and performance. The Colonel and his army, on the other hand, are even more underdeveloped and uninteresting human foils than the Gary Oldman-led colony in Dawn. War for the Planet of the Apes is bleak and despairing, but it mistakes reveling in that misery for quality.  The first two thirds are mostly a plodding bore; only when the apes finally hatch an escape plot does the movie come alive.  Grade: C-