Patty Jenkins doesn’t think movies today have enough sincerity. “I’m tired of sincerity being something we have to be afraid of doing,” the Wonder Woman director said in a recent interview in The New York Times. “It’s been like that for 20 years, that the entertainment and art world has shied away from sincerity, real sincerity, because they feel they have to wink at the audience because that’s what the kids like. We have to do the real stories now. The world is in crisis.”

With Wonder Woman, Jenkins says she wanted to create a movie about a superhero who “believes in love, who is filled with love.” Diana Prince (Gal Gadot) wields sincerity as a kind of blunt instrument, course correcting her allies when she feels they fall short and destroying anyone who seeks to harm innocent people. Wonder Woman is a World War I drama infused with Greek mythology; humanity may have moved on from the likes of Zeus and Ares, but here at least one remains as a corrupting influence, whispering horrendous ideas, like a new gas mask-resistant mix of mustard gas, into German ears from the shadows.

Leaving her island home Themyscira, Diana collides head on with a society that is a vast departure from the place she’s used to. Themyscira, a matriarchal oasis shielded from the rest of the world, is a place built on honesty and loyalty. The Amazons, the colony of women who live there, were initially created by Zeus to calm endlessly warring factions of men who were corrupted by his brother Ares, the God of War. Ultimately enslaved by those men, the Amazons rebelled and escaped to the island. They’ve been there ever since, avoiding the ebb and flow of history, their culture and way of life frozen in time.

Jenkins’ Themyscira is intoxicating, an island utopia whose Amazon temples hide amid lush jungles and impossibly blue water. The women train in combat constantly, resigned to the fact that their paradise is likely temporary and that Ares could return at any moment.  One of Wonder Woman’s chief pleasures is how Jenkins establishes the Amazons and sets up Diana’s story through their everyday rituals and routines.  Diana is the youngest of them, first seen as a child before growing up in a series of rushed scenes that show her secretly training to fight with her aunt (Robin Wright) after her mother (Connie Nielsen), the queen of the Amazons, expressly forbid it. The movie could have used more of this, if only because I can never have enough of Robin Wright riding around on a horse with a sword.

Sadly, the movie trades the gorgeous island locale for the drab confines of World War I trenches and battlefields. After a spy named Steve Trevor (Chris Pine) crashes a plane near the island while carrying valuable intel for the Allies, Diana rescues him and is compelled to join him when he tells her about the war.  She believes the Germans are under the influence of Ares, and that if she kills him things will go back to normal. (Spoiler alert: World War II).

Pine and Gadot’s comedic chemistry carries Wonder Woman through its uneven action sequences once the movie leaves Themyscira. Their playful back and forths as they navigate cultural barriers are often hilarious, and Jenkins plays off of Diana’s sense of (sorry) wonder when she and Steve reach Britain. When she sees the destructive, senseless mechanisms of war, her sense of bemused discovery transforms into horror.  Gadot balances this transformation wonderfully, playing Diana’s reactions as if she’s surprising herself by her response.

Though the movie lacks an interesting villain (it instead has three mediocre ones), Wonder Woman’s most compelling source of drama is Diana’s clash with the British command. She is bewildered by their outraged gasps that a woman is making combat strategy suggestions, and she is shocked and appalled by their aversion to risk if it means saving lives and their focus on a big picture mission even when confronted with desperate people torn apart by the war. Even when Steve agrees to go rogue and assembles a team to go directly to the front lines of combat so she can locate Ares (and so he can hunt down and destroy the source of the new mustard gas), she continues to challenge him. 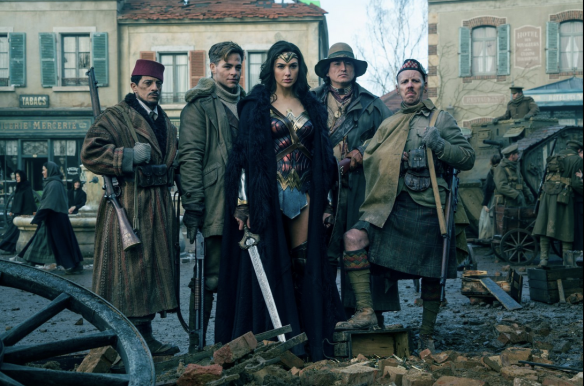 Perhaps the movie’s most powerful moment is when Diana removes her black cloak and climbs out of a trench to free a besieged village from the Germans after being told to stay focused on something else. Here, Wonder Woman crackles with its heroine’s moral fury.  She swats bullets away with her metal cuffs like flies and throws up her shield when the Germans start spraying the area with machine guns. The rest of the army follows behind as she takes enemy fire, their long-fought battle ending with an unexpected victory.

This scene is also one of the few slow motion sequences in the movie that works well.  Jenkins’ overuse of slow motion often deprives Wonder Woman of its biggest asset: its heroine in fast, kinetic motion.  The constant speed shifts took me out of the action, stalling Wonder Woman’s lasso lashing, shield throwing momentum.

Wonder Woman does fall short in crucial places, but it’s anchored by a refreshingly light comedic touch and Gadot’s commanding lead performance.  It’s impossible not to root for a movie whose journey to realization has been delayed for decades. Since Wonder Woman first appeared in comics in 1941, her main DC counterparts Batman and Superman have headlined a total of 15 live action movies (they shared 2016’s Batman v. Superman, which Wonder Woman also appeared in).  She is just as recognizable a name as them in the DC Universe, yet this is the first live action Wonder Woman movie in the character’s 75 year history.  Prior to this, the most notable live action depiction was the ’70s TV series headlined by Lynda Carter.

That is, to put it mildly, bizarre and unacceptable. A character with a mythology as compelling and rich as Diana’s, equally if not more so than Bruce Wayne and Clark Kent’s, should have had half a dozen or more of her own movies by now.  Wonder Woman should have had a crazy, corny ’90s phase and a gritty reboot in the mid-2000s.  It’s unfair to place the fate of female superhero movies squarely on her shoulders, and yet here we are.  Jenkins and Gadot’s take on the hero is a good starting point, an origin story invested in its hero’s sense of discovery and purpose, in her unbeatable passion and resolve. Let us hope this is only the beginning.