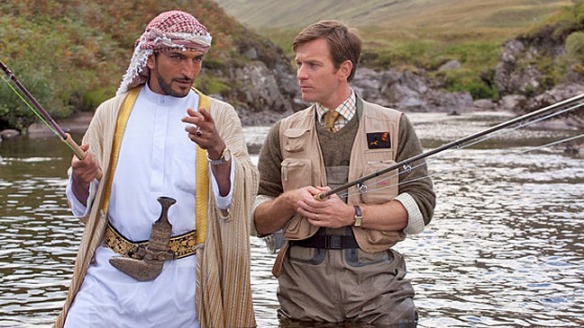 Salmon Fishing in the Yemen is as interesting as a movie about fishing could possibly be, which is a back-handed compliment but also a true one.  It is the story of the wealthy Sheik Muhammad (Amr Waked) and his desire to bring salmon to his native part of Yemen.  This is absurd to the scientist Dr. Alfred Jones (Ewan McGregor), who is approached by the sheik’s consultant Harriet (Emily Blunt) as well as pressured by the British government, to make this vision come true.

There are many technical and ecological obstacles that stand in the way of the sheik’s plan, none of which are made very hazardous or interesting.  This is because the main point of Salmon Fishing in the Yemen is not that there are two likeable people trying to overcome outrageous odds, but rather that they and the sheik must meet in the ideological and cultural middle to do so.  Alfred is obviously very logic based, though he’s stuck doing a task for a man who is relying heavily on faith and destiny.  Since that man has substantial funds, Harriet is happy to play the middlewoman between them.