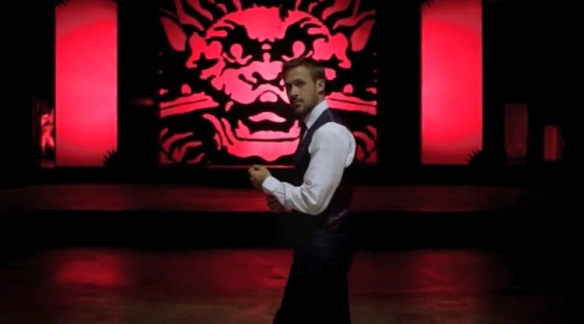 Only God Forgives, Nicolas Winding Refn’s follow up to my favorite film of 2011, Drive, will manage to kill whatever good mood you have that day. This time around, rather than sunny California, Winding Refn takes us to what I can only assume is Hell’s Indochinese district. Only one thing happens here: abuse.

The movie starts with Muay Thai boxers trading blows, and it’s the most civil interaction you’ll see from here on out. From a stadium seat view, we descend slowly, with all  wrapped in an orange glow. Julian (Ryan Gosling) sits in the stands, his expression impenetrable. He exchanges a nod from behind the caged bleachers to the only other white men in the gym. They’re down on the floor, likely exchanging some drugs. Either way this is more than a gym. Suddenly we see hands slowly closing to fists, then Julian revealed only by gold bands of light striped across his face. His brother Billy, drunk, bathed in bands of red light, asks if Julian is ready to meet the Devil.

END_OF_DOCUMENT_TOKEN_TO_BE_REPLACED

After reading a few eye-rolling best movie posters of 2011 lists and questioning the rationalities behind fans and writers picking their favorite posters, I took the time to compile our own own list, putting two years of ad school skills with a fellow designer / colleague to practice. Here is a look at some of the best that came to mind. Honorable mentions: Bridesmaids, Scream 4, The Dark Knight Rises, Shame and Weekend. 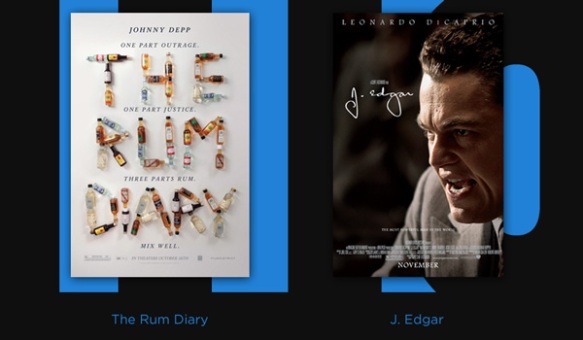 11. The Run Diary: Commercially the long-awaited Johnny Depp film was a flop and critically it still disappointed. Most of the blame goes to marketing execs, who didn’t quite know how to sell the film despite a mildly attractive trailer and this copy clever typographical poster.

10. J. Edgar: Most might argue the other way on this, claiming Leo in an unflattering, oddly cropped portrait missed the mark, however, the still demands much attention and captures the character brilliantly. The hand-written signature title at the top quiets the image to match the tone of Eastwood’s film. END_OF_DOCUMENT_TOKEN_TO_BE_REPLACED

Violence comes and goes with Ryan Gosling’s unnamed driver.  Like Clint Eastwood’s Man With No Name, there’s no indication where he came from or where he’s going.  However, you get the feeling he’s been traveling place to place causing the same kind of chaos.

Drive doesn’t initially appear to be a movie of such violence.  The almost serene first half is stylistic perfection, with director Nicolas Renf tracking the driver from behind the wheel of a suspenseful, sneaky heist escape (in a Chevy Impala), to a movie set where he flips a car and to his initial meeting with his neighbor Irene (Carey Mulligan) and her son.  He stumbles on the mob second hand, when Irene’s unfortunately named husband Standard (Oscar Isaac) needs to pull off a robbery to get some thugs off his back.

From that heist on, Renf holds no prisoners with the blood-letting.  It wouldn’t work if Gosling approached it with the same semi-charmed apathy he gives the character in the first half.  He trembles as the body count stacks up.

What makes Drive a film to remember at the end of 2011 is the moody, gorgeous cinematography and the first-rate score.  The brooding visuals mesh together with the electronic beat of Cliff Martinez’s music to create a neo-noir with an 80s synth rhythm.  Even when Renf and screenwriter Hossein Amini hack and slash these characters to bits, it never feels out of place.

There is a scene fairly early on in the movie where the driver sits with Irene’s son and watches a cartoon about sharks.  He asks the boy how he knows the shark is bad, and the boy says “Because he looks bad.”  This scene is important to understanding not just Gosling’s driver, but the principle villain as well.  While Ron Perlman is all-too at home in the campy role of a crime boss, Albert Brooks seems a little off-beat as a mob kingpin.  He delights in the role, though, going over the top without losing sight of the consequences of all the killing.

Drive is also unique as a noir in that it doesn’t let either of the attractive female characters (Mulligan or Christina Hendricks) expand into a femme fatale or even really expand much at all.  Irene is accustomed to tacking on a smile for her son, and Mulligan is perfect at conveying happiness and sadness with contrasting expressions in her smile and deep, dark eyes.

At the end, though, this is ultimately a man-made world of corruption and violence, and the driver is left to eliminate it to keep Irene and her son safe.  He works as a car repairman for a schmuck with a limp (a terrific Bryan Cranston).  Brooks’ Bernie Ross puts up the money to have the driver race a car for him.  He and Perlman’s Nino are so opposite that their scenes together in the garage and in their front of a pizzaria are one of the few things that detract from the movie’s mood.

You could split Drive down the middle for its nearly bloodless first half and its gory second act, but it also fits together as a convincing whole.  This is because Renf never loses sight of his characters.  Though the villains are undeniably evil, the hero isn’t all that good.  We’re left to root for him because we see him from all angles and see that his heart is ultimately in the right place.  He’s the good shark.