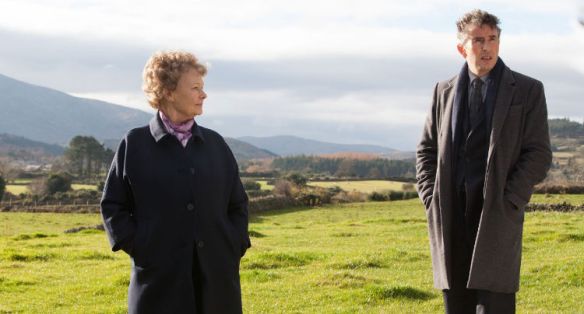 Though Philomena is about a journalist writing a human interest story, it is thankfully absent the easy emotional payoff that such stories are often intended to have.  That reporter, Martin Sixsmith (Steve Coogan), hates the idea of writing a fluff piece, but he’s looking to occupy his time after being canned from a job as a government mouthpiece. (Ironically, that involves quite a bit of fluff).

Director Stephen Frears wastes little screen time before thrusting Sixsmith and the movie’s real protagonist, Philomena Lee (Judi Dench), together for the article.  Philomena is a cheery old Irish Catholic woman looking to connect with a son that she had out of wedlock.  Her family dropped her off at a convent, where she was held in servitude and only allowed to see her son for one hour a day.  Then, he was sold to an American family for adoption.

END_OF_DOCUMENT_TOKEN_TO_BE_REPLACED

The most poignant moment in My Week With Marilyn comes and goes so quickly that the viewer will soon be sedated back into the confines of its unchallenging, riskless story.  Ms. Monroe (Michelle Williams), gliding down a staircase clutching her flavor of the week (Eddie Redmayne), turns to him as she sees a crowd forming and says, “Shall I be her?”

“Her” of course is the Marilyn Monroe that burned into the screen and the collective imagination of the world in the mid-20th century; the suit of armor that a deeply insecure, troubled woman named Norma Jean donned to deal with that fame.  My Week With Marilyn is sadly less concerned with moments like these than it is in ultimately keeping that shroud of secrecy over Monroe.