The art of the surprise twist is something you just don’t see a lot of in modern movies, but Pedro Almodóvar sure as hell pulls one off in The Skin I Live In (assuming that like me you haven’t read the source novel beforehand).  Almodóvar makes his horror debut with this film, though his aesthetic touches from recent films like Broken Embraces and Volver remain well in tact.

Beautifully art directed sets and the lusciously costumed stars combine quite well with the truly deranged story.  Antonio Banderas stars as the demented plastic surgeon Robert Ledgard, who is keeping a woman named Vera (Elena Anaya) hostage in his home to do synthetic skin experiments on.  After the tragic death of his wife, who committed suicide after seeing what she looked like after being burnt in a car crash. Ledgard becomes obsessed with recreating Vera in her image.

END_OF_DOCUMENT_TOKEN_TO_BE_REPLACED 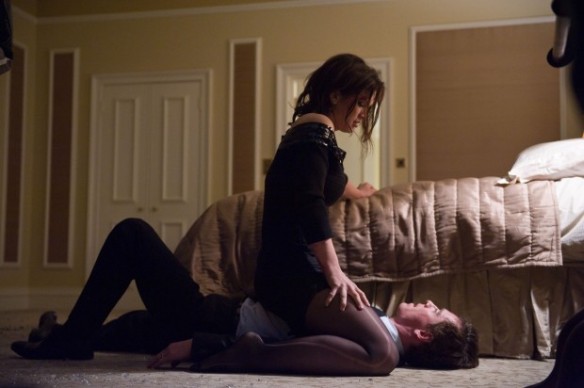 Like a virus that won’t go away, Mallory (Gina Carano) jumps around the globe, slowing down or killing anything that gets in her path.  That is largely where the narrative similarities between her story and the one from director Steven Soderbergh’s last film, Contagion, end though.

Haywire is curious when placed with the rest of his catalog in that it focuses on a single individual but also contains a large ensemble cast.  Usually his films are one (Erin Brockovich) or the other (Traffic).  At the center of this semi-departure is MMA fighter Gina Carano, who Soderbergh saw fighting on TV and decided to build a movie around.  Carano’s ferociously physical performance as Mallory is by far the movie’s greatest asset.  Soderbergh films most of the action sequences in confined areas, letting her utilize the environment in astonishing and brutal ways.