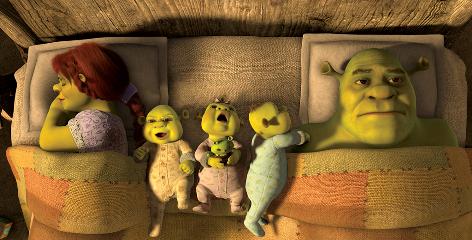 Many parallels can be drawn to this film in the series and Frank Capra’s classic film.  In fact, the message of the movie is the exact same.

None of his old friends are living good lives. Donkey (Eddie Murphy) is pulling a prison carriage and being whipped by witches when they want him to sing a different song.  Puss ‘N Boots (Antonio Banderas) has let himself go, now a plump, lazy cat reduced to looking forward to being brushed twice a day.  Fiona is perhaps the best out of them all, now leading an ogre resistance against Stiltskin and his band of witches.

As far as visuals in this movie go, nothing is really overwhelmingly excellent.  The character designs are all adequate and in place, but aside from an exciting escape scene and the final battle scene, the 3D isn’t put to much use at all.  In fact, the 3D battles in any film other than Avatar all seem to be the exact same.  Movies like this are better served staying innovative within the narrative.

The biggest redeemer in Forever After are the characters.  This franchise has always had that going for it, and here is no different.  Along with the usual four, Rumplestiltskin is a wonderfully menacing addition.  Voiced by one of the Animation story editors, Walt Dohrn, he prowls the screen with a Napoleon complex for the ages.

Myers, Diaz, Murphy, and Banderas all bring their characters to life with zesty, if not so original, voice work.  When you have big stars, and they’ve worked together on previous films in the same franchise, it’s not likely to be crap.  The thing that hurts this film the most is how safe it is, and though there is talent, none of it really goes anywhere.

As far as series’ go, you could do much worse than Shrek.  The people at Dreamworks know what they’re doing, and this is their signature franchise.  However, as always, the animated pixels are better left to Pixar.

2 thoughts on “REVIEW: Shrek Forever After”