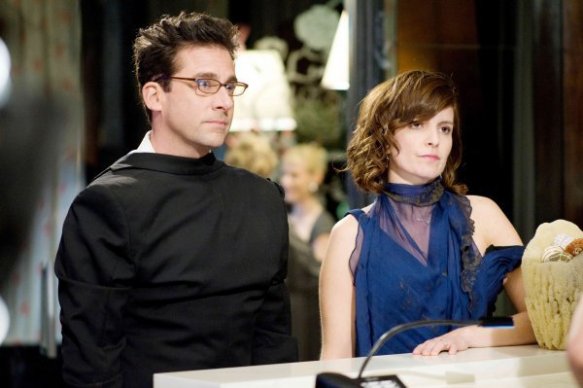 Modern comedy is often found in the silence, not the punchline.  It’s usually the uttering of a few colorful adjectives followed by an awkward stammer or glare.  When done right, on TV shows like The Office and 30 Rock, it is hilarious.  Date Night plucks its two stars from those two modern TV milestones to try and inject a little bit of comedic energy into a script much in need of it.

Steve Carell and Tina Fey play Phil and Claire Foster, a self-proclaimed boring suburban couple.  They are comatose, floating around like a slapstick version of the Burnham family from American Beauty.  Then, thanks to some blatant plot doctoring, they are forced on a life-or-death journey into a New York that is oozing with corruption and filled with vermin played by famous actors.