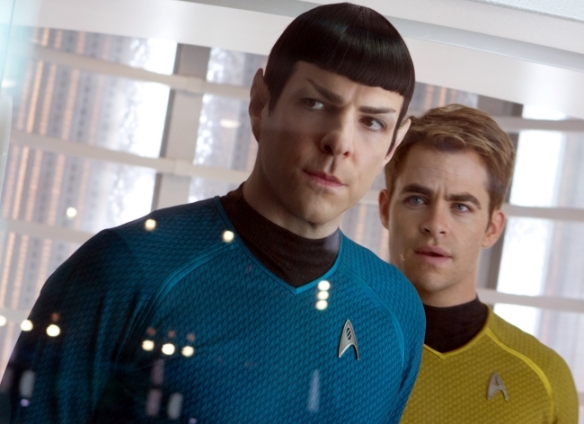 The second installment of J.J. Abrams’ Star Trek reboot checks all the necessary boxes to make it an effective summer blockbuster, which is its biggest problem.  It feels like a laundry list of co-mingling plot points and action set pieces, more calculated business venture than artistic Enterprise.  Abrams is a good enough ringleader that all the pieces fall together nicely and the high tech toys he gets to play with are a good action showcase, but the movie will fizzle away when a new good enough sci-fi blockbuster opens in a couple weeks to take its place.

Into Darkness, despite its heftier title, is not a plunge into darker territory, as second franchise installments often are.  Sure, one of the series’ most famous villains, Khan (Benedict Cumberbatch), surfaces, but it feels just as light on its feet as Abrams’ 2009 reboot.  The best thing about it is still the chemistry between Kirk (Chris Pine) and Spock (Zachary Quinto), whose humorous ideological clashes provide the movie with much of that lightness.  There are exceptional action sequences, including an astonishing sequence of space diving to an enemy ship, but they aren’t nearly as entertaining as watching Spock attempt a romantic relationship with Uhura (Zoe Saldana).