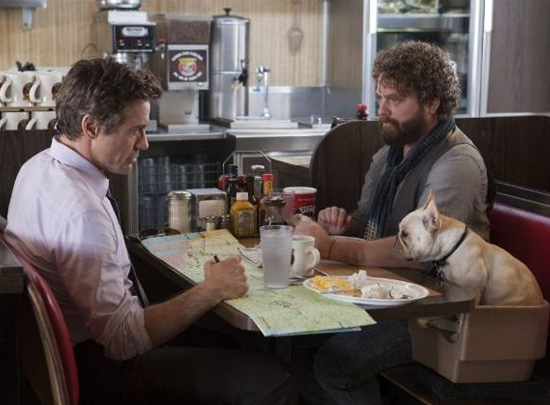 Watching Zach Galifianakias’ Ethan Tremblay, an aspiring actor, act out a scene given to him by Peter Highman (Robert Downey Jr.)with  amateurism and then turn it into an emotionally-charged turn reminded me of Mulholland Dr. The comparisons with that 2001 masterpiece and this forgettable buddy comedy should end there, but they don’t.  A lot of Todd Phillips’ latest is a hallucinatory road trip filled with drugs, car wrecks, and bizarre tonal changes.  Take my advice, stick with David Lynch.

Phillips could’ve done anything after he sailed away with the box office last summer with The Hangover.  Instead, he decided to recycle his use of Galifianakias as the awkward, sympathetic idiot and pair him with Robert Downey Jr for a road movie based on Plains, Trains and Automobiles.  It’s an appealing match-up ripe with potential, almost none of which is utilized.  The two actors at the center were almost given too much freedom to be themselves, letting their personalities fill in the (many) blanks the script left out both plot-wise and on the laughing front.