Dark Shadows is a film inhabited by the Gothic art direction that has become Tim Burton’s staple in addition to the comic macabre his pale people act out.  Lately Johnny Depp has been the pale muse front and center in Burton’s productions, becoming just as much a staple of his work as those faded worlds. This latest collaboration is nothing really new for either of them; a vampire invading the gloriously tie-dyed era of the 1970s is a perfect example of a Gothic force imposing itself on a world of color.

The crux of the story is fairly simple.  Barnabas Collins (Depp) is turned into a vampire and imprisoned by the witch Angelique (Eva Green) after she kills the other woman he loved.  His suffering is extended for all eternity, so when he emerges from that chained-up coffin nearly 200 years later, he is a very bloodthirsty fish-out-of-water.  He meets up with the present-day Collins family, who happen to live in the same menacing, faded mansion as he did.

Upon arriving he meets the drunken butler (Jackie Earle Haley) and the grouchy matriarch Elizabeth (Michelle Pfeiffer).  He explains his situation to her, she agrees to hide it, and they tell the rest of the family that he is a distant cousin.  Dark Shadows is based on a television show, though Burton leaves his distinct visual mark on the material.  He has always been more gifted at creating worlds than telling stories in them, and he does his best with the sloppy, seemingly aimless screenplay by Seth Grahame-Smith.  Accenting the comedy was the right way to go here, and Dark Shadows is often very funny.  Depp and Green both give inspired, over-the-top performances as they continue their centuries-long magic duel in the era of Vietnam and hippies. 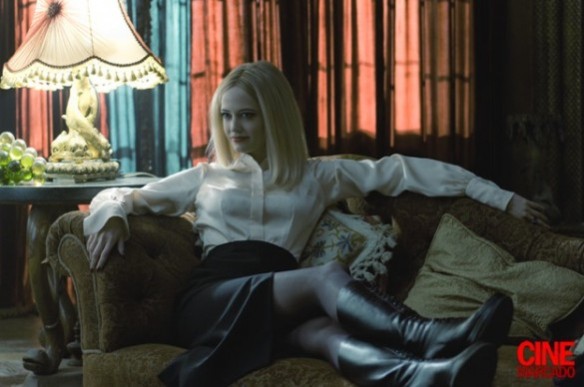 There is a fantasy much darker than the supernatural one operating beneath the surface of this latest Burton/Depp concoction, though.  The most troubling thing about Dark Shadows is not its sloppy storytelling but its disguised contempt for its plentiful female characters.  Angelique’s thirst for revenge is borne out of that male fantasy that a woman becomes so obsessed with him that she turns delusional and incoherent without his presence.  Then, of course, she must be scolded into submission or death.

This principle is also true for Helena Bonham Carter’s character, the psychiatrist Dr. Julia Hoffman.  She is a boozing, pill-popping psychiatrist who throws herself at Barnabus simply because he pays her one simple compliment.  As in Sweeney Todd, Bonham Carter’s character comes up short in her director husband’s increasingly cruel roles for her.

It’s hard to take such a lightheartedly demented film like Dark Shadows so seriously, but its troubling misogyny travels with Barnabus from the dark ages as well.  There are quips early on by Elizabeth and the new maid Victoria (Bella Heathcote) about women being vastly superior to men, but it’s not long until Barnabus arrives and they all more or less succumb to his various charms.

For a PG-13 film, the amount of sex and death that is hinted at or partially shown is somewhat startling.  In such a finely veneered world it can almost seem barbaric, and yet when Angelique and Barnabus actually do have “sex” they remain fully clothed as they toss each other around the room.  Burton remains in frantic close-up trying to avoid what must be the studio’s worst fear: actually showing something.  He breaks his tradition of well-composed shots because this movie is afraid of the sex it so blatantly wants us to know is going on.  In this respect it resembles the Twilight films more than anything, even if its vampire is more of the Nosferatu variety.