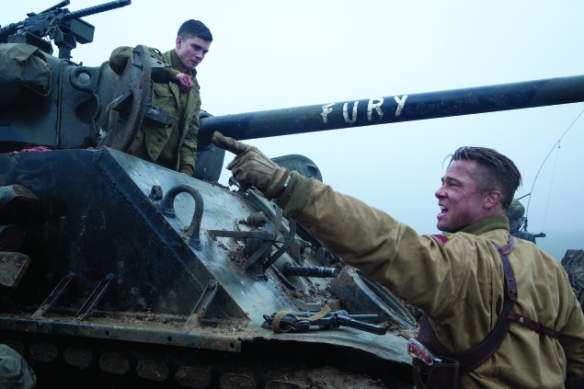 There are a lot of despicably violent images in David Ayer’s Fury, a World War II movie set in the scorched-Earth Germany at the end of the conflict.  It begins with a majestic white horse carrying an anonymous soldier through a battlefield, though it’s not long before he’s identified as the enemy when we see Don Collier (Brad Pitt) jump out from a tank and stab him in the neck and eyes.  He lets the horse run off.

Not long after that moment, Collier tells a newbie named Norman (Logan Lerman)  to clean out his seat in their tank, which includes plenty of blood and the upper quadrant of a human face, eye and all.   Norman vomits, and you may want to too.  Not only are the images in Fury grotesque, but much of the behavior is too.  At first, Collier’s tough-but-fair-ness is insisted upon by the script, but then it’s slowly chipped away.   There are times when he seems at risk of transforming into Colonel Kurtz.