Last April Fools’ Day, we gave you five movies that fooled you. This year, we thought it’d be a good idea to let the viewer have the last laugh.  The annals of film history are filled with characters that we enjoy purely because of their stupidity.  They don’t know they’re stupid, and that is the root of their comedy.  Here are five memorable screw-ups who wouldn’t be better any other way. 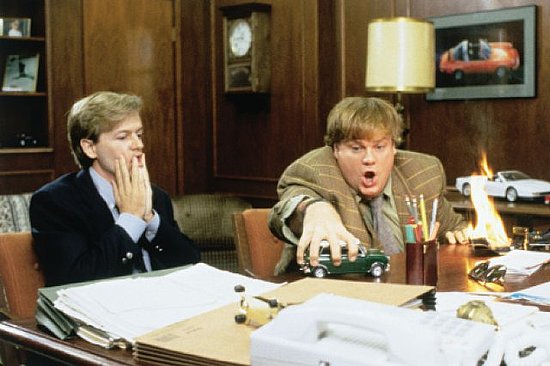 Tommy (Tommy Boy)– Chris Farley made a career (far too short of one at that) out of playing the lovable buffoon.  His most memorable role is opposite David Spade’s dry, no-fun business partner named Richard in this now-iconic buddy film.  It wasn’t anything new when it came out, but it’s one of the funniest road films of the 90s, and arguably of all time.  Farley outdoes himself for idiocy, whether it’s pretending to be surrounded by bees to evade the cops or taking down Dan Aykroyd’s tire tycoon by pretending to be strapped with a bomb.  In the end he saves the day, but he’s not any smarter.