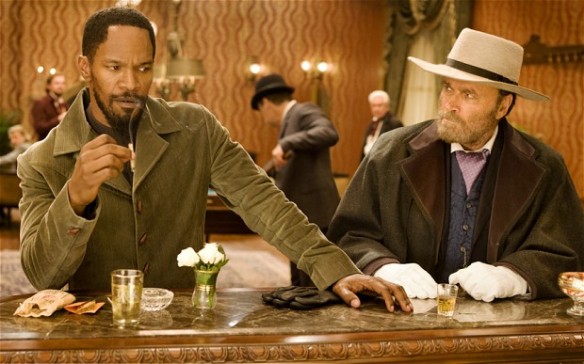 Django, like the ‘D’ at the beginning of his name, is silent.  This is no small feat, given that he is the main character in a Quentin Tarantino movie, and should be stopping to yak at any given opportunity, preferably before a burst of ultra-violence.

Of course there is plenty of bloodshed in Django Unchained, so much in fact that it paints a white plantation red, mostly with the blood of its owner and his employees.  It is Tarantino’s second historical revenge fantasy in a row, following the revisionist WWII epic Inglourious Basterds.  Here, though, he crucially refuses to revise the horrors of American slavery, and depicts them in ways that are startling and horrific.  The blood from the shootouts may be gratuitous and expressionistic, but it’s the beating, dog mauling and whipping that feel brutally real even if the movie they are in is often highly stylized.

Tarantino isn’t someone who ever really matures as a filmmaker, simply because from the get-go he has had a knack for style and known how to craft it with his unparalleled verbiage.  Here, though, his tackling of a taboo subject matures his subject matter if nothing else.  Part of the problem of Inglourious Basterds was that his obsession with pulp aesthetic sometimes got in the way of depicting the atrocities of World War II, no matter how cathartic it was to see Hitler get his comeuppance at a movie theater.

As he has done in every movie (sometimes to a fault), Tarantino samples from a smorgasbord of styles and genres.  Django is a Spaghetti Western set in the Old South, filled with pulp snap-zooms and operatic genre music, though there are also songs by Rick Ross, Johnny Cash and John Legend.  As we follow the freed slave of the title (Jamie Foxx) and the bounty hunter Dr. King Schultz (Christoph Waltz) who freed him, they take us on a Southern plantation tour that is first about collecting cash by killing wanted outlaws and ultimately about rescuing Django’s wife (the sadly underused Kerry Washington).

There are times in the movie’s first half that it drags on, and Waltz seems to be reapplying many of the mannerisms and characteristics from his character in Basterds, even though his character in that movie was exceptional.  The movie is never boring, however, which is an achievement in and of itself considering it’s almost as long as The Hobbit.  Once they come in contact with the slimy plantation owner Calvin Candie (Leonardo DiCaprio), it is some of the best work Tarantino has done since Kill Bill. 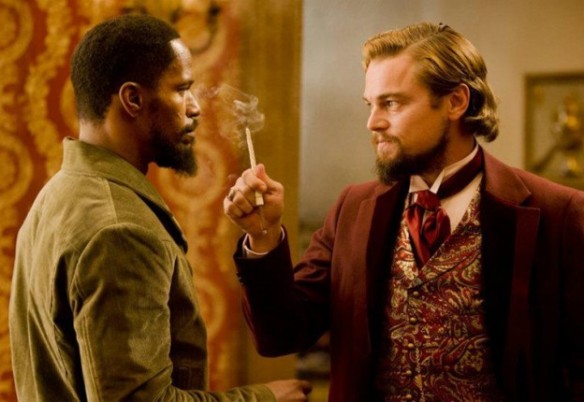 Candie and Schultz do most of the Tarantino banter in this movie, and DiCaprio is fantastically demented in his role.  The bounty hunters’ plan to rescue Django’s wife from his plantation (called Candie Land) is to pretend to want to buy a prized slave and force him into brutal death matches, and then offer to buy her as well.  Since she speaks German just like Schultz, it seems like a plausible plan, but of course the director has little use for plausible plans.  Candie is mostly too stupid to realize that Schultz and Django are trying to pull one over on him, though.  This is where the head house slave Stephen (Samuel L. Jackson) comes in.

Jackson’s character is by far the most controversial thing about the movie, except maybe its use of the n-word.  To me, though, it is a frank acknowledgement of the Uncle Tom stereotype done in a disgustingly upfront and evil way.  Not only does Stephen continuously play kiss ass to Candie, but he seems to relish the power he has within the household.  This portrayal is troubling only in the sense that Stephen ultimately becomes the person Django is facing off with instead of Candie, pitting the black characters against each other.

Whether this was intentional or not, it doesn’t overshadow the movie’s bloody plantation revenge story or its gruesome depiction of slavery.  No character with slave blood on their hands walks away unscathed, and thankfully Django deals out a brunt of the punishment.  For all Spike Lee’s criticisms of Tarantino, he has delivered the most brutally honest depiction of America’s gravest atrocity since the ill-received 70s film Mandingo, which of course he references here several times.