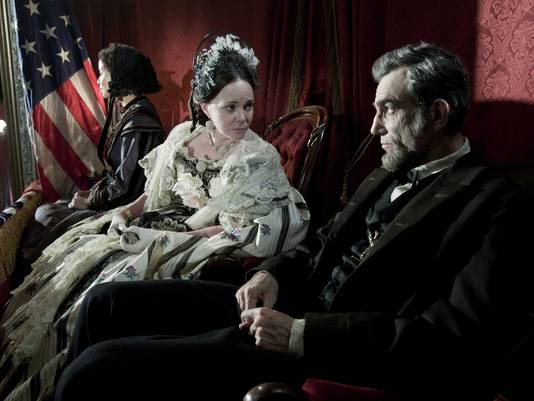 The controversy surrounding Lincoln’s depiction of African Americans has been slightly dwarfed in the wake of Django Unchained.  There was still rampant, endlessly insightful discussion of it in all corners of the internet, but its subdued, melancholy pacing doesn’t place that issue front and center, and it is decidedly less confrontational than Tarantino’s bloody Southern.

After watching Spielberg’s political epic a second time, I came away with a renewed appreciation for the skill with which it was crafted.  Tony Kushner’s flair for language, the astonishing performances by everyone from Daniel Day-Lewis to Sally Field and Tommy Lee Jones, the production design- all of these meld to form a focused political thriller that ranks among Spielberg’s finest films.

I do not say this lightly.  I am not what you would call a die hard fan of his films, and many of them are overrated in quality.  Past classics like Jaws, Schindler’s List and E.T. must stand beside more modern mediocrity like The Terminal, War of the Worlds and the abysmal fourth installment of Indiana Jones.  However, Spielberg has also produced several quality films in the new millennium; in addition to Lincoln, add in A.I. Artificial Intelligence, Munich, Minority Report and maybe even The Adventures of Tintin if you’re feeling generous.

Despite all these tonally different films, Lincoln shows a side of Spielberg that is surprising.  It is restrained rather than grandiose, and emotionally gripping without being too sentimental.  There are moments when John Williams’ score swells a little too loudly, but that’s only because the movie is often too deliberately paced and moody for that kind of chintzy emotional payoff.

There are moments of melodrama, like the epic confrontation between Lincoln (Day-Lewis) and his wife Mary Todd (Fields), but it is powerful precisely because the camera captures the raw emotion of the performers instead of trying to elevate it.  Claustrophobic scenes like that one are contrasted with the slightly less stuffy Congressional debates, which is where Kushner’s screenplay really shines.  Tommy Lee Jones digs into the role of abolitionist Congressman Thaddeus Stevens with sardonic relish, savoring every dry syllable as the hall debates the Thirteenth Amendment.

Tons of other venerable actors make appearances here, including John Hawkes, David Strathairn, Joseph Gordon-Levitt and Hal Holbrook.  As I noted in my initial review when analyzing the New York Times op-ed, there is a decided lack of African American presence if not a total exclusion.  A key scene where the activist and White House servant Elizabeth Keckly (Gloria Reuben) confronts President Lincoln about his personal opinions about slavery feels somewhat forced and doesn’t dig deep enough.  It only works because the acting is so good.

Day-Lewis has pretty much already won his third Best Actor Oscar for this movie, and there isn’t a lot more to say about his universally lauded performance other than it deserves the attention it’s getting.  He dominates the movie because it is designed around him, though the narrowed structure around the Thirteenth Amendment works much better than a straightforward biopic would have.  Lincoln is a movie about what powerful white men did right at the end of the Civil War.  It shows them grappling with their personal ideology versus the public good, and it portrays a thrilling if somewhat narrow view of one of the key moments in American history.  It should be as lauded for its quality as it is debated for its content.