When I heard that the venerable Martin Scorsese would be the executive producer and director of the new HBO show Boardwalk Empire this fall, it got me thinking.  What would other directors do with the expanded storytelling capability of television?  So I’ve decided to start a new segment dedicated to analyzing what an acclaimed film maker would do with a whole season (12-13 one hour episodes) on HBO or Showtime.  I pick those networks because they are the only ones where you can be uncensored like the directors in their films.

Hypothetical Premise: After being released from San Diego prison after a twelve year stint, a middle-aged woman learns to cope with the real world again as well as reclaim her throne atop the criminal underworld.  In the meantime, she begins grunt work at a Big Kahuna Burger, where she learns that there is more than one way back to the top of crime.  The first season would begin at the end, showing the woman executing the one who betrayed her and ending a gang war.  It would leave it open for a second season, but still provide closure.

Cross Between: Deadwood, Kill Bill, and Clerks. It would allow for those sprays of his dialogue and character interaction as well as the occasional killing spree. 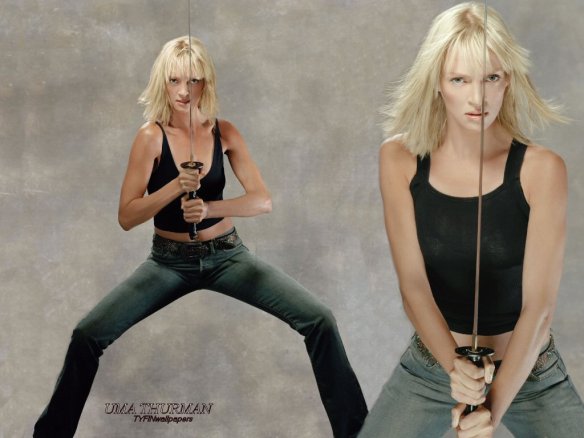 Likely to bring along: If Mr. Tarantino were given free reign on the television show of his choice, he would most likely bring along Uma Thurman.  Since her acting career is next to nothing outside of his watchful eye and sharp pen, she would be lucky to land a more permanent gig where she thrives.  It’d also be a treat to see Samuel Jackson, another Tarantino regular, have a minor but recurring role in the show.

Likely hood of this happening?: 5/10.  Tarantino has another Kill Bill installment with Thurman set for 2014, and who knows what he’ll do between now and then.  What we do know, though, is that it won’t be working on a fully-functioning television program.  It’s not impossible though.

3 thoughts on “If they were in television… Quentin Tarantino”