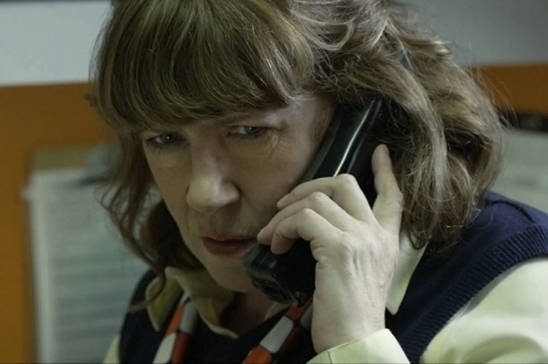 Compliance is so bad that I hesitate even writing about it.  It is filled with such an entitled sense of purpose and meaning that the cruel sexist joke it ends up becoming is all the more disheartening.  Supporters of the film will have you believe that because it is based on “true events” that its morality is somehow less disturbing.  To them I would say: The Blind Side.

Craig Zobel, the writer and director of this movie, knew exactly what he was doing.  In portraying an infamous fast food prank call caught on security cameras where a manager talks with an alleged police officer and obeys his every whim, he ends up illustrating a sadistic fantasy under the guise of morality.  Sandra (Ann Dowd), a middle-aged manager at the fictional fast food chain Chick-Wich, is the principle woman on the other end of that phone.  A man posing as a police officer (Pat Healy) calls her claiming that one of the cashiers (Dreama Walker) was caught on camera stealing from a customer’s purse.

Before Becky (Walker) is put through this ordeal, we’re made to see how envious the other, plumper women are of her sex life.  The envious looks they give her follow through to the actual incident, coating the movie in misogyny.  Male characters are the sole voices of disbelief and pity, except of course the demented master on the other end of the phone.  They are ultimately just as complicit, but it is Sandra and not them who are dragged through the muck by an uppity network reporter in the movie’s conclusion.

Compliance is a film to watch if you are a white male who wants to feel superior to women while also feeling morally concerned about sexual exploitation.  You will be treated to implied acts of physical degradation as well as watch the perpetrators be punished for their actions.  It is one of the most self-important acts of having and eating the cake that I have ever sat through.