Seeing movies after they have been stampeded over and analyzed by the critical mainstream can be both a blessing and a curse, as it is with Steven Spielberg’s latest historical filmmaking venture, Lincoln.  I often make it a point not to read reviews of movies I plan on writing about until after I’ve seen the movie and collected my thoughts, and this one is no exception.

That being said, there was an op-ed in the New York Times released by Northwestern history professor Kate Masur days before Lincoln was released nationally.  It was titled “In Spielberg’s Lincoln, Passive Black Characters,” and it addresses just what its title proclaims in a succinct, powerful fashion.  Masur is not a professional film critic, and her piece is not an evaluation of the whole production but merely a response to the specific part of it that her title describes.

The most powerful part of her argument is this last paragraph:

It is a well-known pastime of historians to quibble with Hollywood over details. Here, however, the issue is not factual accuracy but interpretive choice. A stronger African-American presence, even at the margins of Mr. Spielberg’s “Lincoln,” would have suggested that another dynamic of emancipation was occurring just outside the frame — a world of black political debate, of civic engagement and of monumental effort for the liberation of body and spirit.

I read her piece after I had seen the movie, though I knew of its title and existence beforehand.  The specific historical alterations she addresses with respect to President Lincoln’s servants were unfamiliar to me; what I did notice, though, was the same thing that is prevalent time and again in American history and the movies Hollywood makes about it: though other groups are active and present during social movements, the movies often portray what the white men did about it.

Outside of an opening conversation in which President Lincoln (Daniel Day-Lewis) talks to two black soldiers who confront him about pay inequality, the other black characters do not interact with the president in this way.  The First Lady’s servant (Gloria Reuban) comes the closest in a scene where she asks Lincoln if he wants them (African Americans) there, but it seems very passive and the president’s facial expression shift and pause before answering her says more than the rest of the scene.

This is mostly because Day-Lewis, widely considered one of the greatest actors living or dead, gives yet another monumental performance as our sixteenth president.  His acting called to mind what Marlon Brando did in The Godfather, which is acting that is so good and go-for-broke that it will be parodied for years. 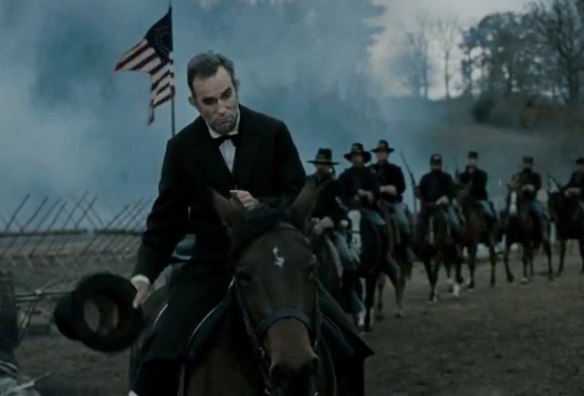 What else should we expect from Day-Lewis and Spielberg, though?  Working with a terrific, lively script by Tony Kushner, they chronicle the political battle waged over the Thirteenth Amendment while the Civil War was in its final throes with true liveliness and sense of purpose.  The verbal confrontations are startling and often captivating, and the stakes of what Lincoln, his cabinet and Republicans in Congress are working toward is never lost amid the barrage of subplots.

Lincoln is exceptionally well-made and executed.  In addition to Day-Lewis, the rest of the cast, which includes Sally Field, Hal Holbrook, Joseph Gordon-Levitt, David Strathairn, James Spader and countless other recognizable faces, deliver terrific performances.  Come Oscar time, though, the only one likely to stand a chance at winning any sort of award other than the star is Tommy Lee Jones, whose work as the notoriously outspoken Abolitionist Congressman Thaddeus Stevens is some of the best of his career.

Spielberg never lets one performance overwhelm the story, and his direction here is some of the most assured and impassioned of his career.  Though it is mostly a movie of words, the visual punch of seeing Lincoln walk through a bloody, corpse-ridden battlefield is undeniable. Day-Lewis is given several Oscar moments like this simply by the  movie’s design.  The way he appears increasingly drained both physically and emotionally as the movie progresses is perhaps its most memorable and vital asset.

That would make Lincoln’s attempts to give voice to its black characters its weakest link, though it certainly does not kill it.  Sadly, this is because the American political system of that time was, by design, white men deciding what is socially and economically acceptable for the masses.  Even sadder, though, is that it largely still is.