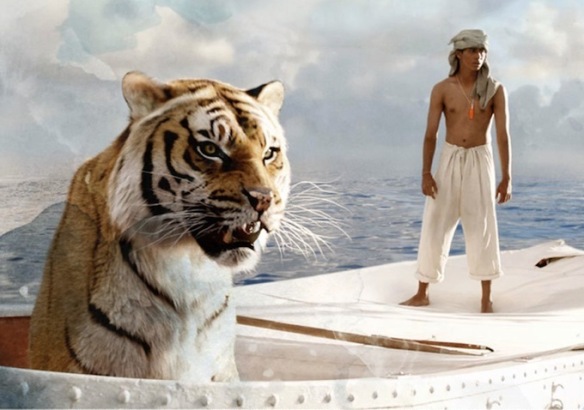 Because of the horrendously vague marketing campaign, the only draw to Life of Pi for me was the Ang Lee directing credit.  Though Lee’s directing career includes some misses (Taking Woodstock, Hulk) he is a master storyteller and when he’s on (Brokeback Mountain, The Ice Storm) few contemporary filmmakers can touch him.

Life of Pi is neither masterwork nor miss.  It is, however, a stunningly gorgeous movie about survival at sea, and all the problems and symbolism that entails.  An inquisitive young boy named Pi (Suraj Sharman) is moving away from his home in India with his family to escape mounting political tensions.  The ship is caught in a storm and sinks.  Pi and four animals from his family’s zoo stowaway on a life boat and drift across the Pacific.

These animals- zebra, orangutan, hyena and tiger- reenact the circle of life in double time aboard this cramped ship.  Soon it’s just Pi, the tiger and spiritual musings.  Lee does an admirable job of softening the script’s tendancy toward didacticism, creating a truely captivating visual journey during Pi’s drift through the Pacific.  The water is by far his biggest asset in that regard, whether he’s reflecting the impossibly blue sky or exaggerating the glow of a sea of jellyfish. 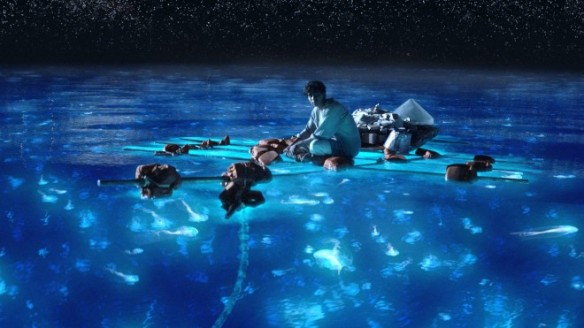 Pi’s journey during these segments is so transfixing that the awkward cuts to interviews of his older self (Irrfan Khan) telling the story to a Canadian journalist (Rafe Spall) are distracting and mostly dull.  Most of Pi’s younger days before the ship wreck are too, not because the actors are bad but just because the mediocre dialogue can’t stand on its own.

Much of the movie is dependent on another part to carry it through its rough patches.  Suraj Sharma brings a good amount of emotional gravitas to the main role, but he would be much duller without the tiger.  Likewise, the sometimes poorly animated tiger needs a human counterpart to seem even the least bit real.

The movie works, though, no matter how many things it has working against it.  It is an often mystical, sometimes thought-provoking story, and it would be a terrific movie to take young children to.  It is intense and potentially terrifying at times, but also a wonderfully open-minded journey into the unknown.

4 thoughts on “REVIEW: Life of Pi”