1. Cate Blanchett & Rooney Mara- Carol– This year, the top spot on the list is also an act of protest.  It’s ridiculous to debate who gives the leading performance in Carol, and it’s ridiculous to campaign Rooney Mara for Best Supporting Actress awards when most of the film is told from her point of view.  Lost in the debate are two performances destined to be iconic; Mara as the young store clerk Therese and Cate Blanchett as Carol, the regal housewife she falls in love with.  Todd Haynes’ sublime 1950s melodrama is a superb showcase for both of them; never has a director better understood the distinct power of Blanchett’s slow-burning gaze, or the quietly devastating power of Mara’s wide, wondrous eyes.  Together the two actresses sketch a bond as intimate and ravishing as any screen romance in recent memory.

2.  Julianne Moore- Maps to the Stars- Julianne Moore gives a brutal, merciless performance in Maps to the Stars, playing a woman who is gradually unraveling at the thought of no longer getting movie roles as she reaches 50.  Her Havana Sagrand is Valerie Cherish of HBO’s The Comeback stripped of any sympathy and dignity.  She is ruthlessly mean and unhinged, the kind of character you’d want to keep your distance from in case she spontaneously combusts.  Like Keira Knightley in A Dangerous Method or Jeff Goldbloom in The Fly, this is exactly the kind of performance that director David Cronenberg loves to lavish with close-ups.  It’s among the most terrifying and memorable performances from one of the greatest living actresses.

3. Leonid Yarmolnik- Hard to Be a God- Every actor in the late Aleksi German’s beguiling masterpiece Hard to Be a God is totally committed to sustaining its aura of filthy mystery, and Leonid Yarmolnik is at the center of that.  He plays Don Rumata, a scientist sent to study Araknar, a planet whose society resembles Earth’s Middle Ages. Much of the movie plays off of Rumata’s reaction to the world around him descending more and more into insanity, and Yarmolnik offers glimpses at horrified humanity even as he flings snot and shit with the rest of the cast.

4. Greta Gerwig- Mistress America- Greta Gerwig is key to the rapid-fire wit at the core of Mistress America, her second writing/acting collaboration with director Noah Baumbach.  Brooke, like the title character in their last collaboration Frances Ha, is a free spirit who doesn’t quite realize all the baggage that comes with that label.  Though the movie is initially set up as a mentor/pupil buddy comedy involving her and her soon-to-be stepsister Tracy (Lola Kirke), that dynamic is altered and complicated by financial woes and diverting artistic ambitions. Brooke becomes an undesired inspiration to Tracy’s short story writing, and Gerwig nails the hurt and bewilderment that comes with that even as she maintains the character’s confrontational charm.

5. Michael B. Jordan- Creed- Ryan Coogler’s reinvigorating reboot to the Rocky franchise found just the charismatic lead it needed in Michael B. Jordan.  As Adonis Creed, the son of deceased champion boxer Apollo Creed, Jordan shows the character’s determination to forge his own legacy even as he takes a trip through his father’s past. He moves from California to Philadelphia to train with Rocky Balboa (Sylvester Stallone), his dad’s rival and eventual friend. Jordan’s ability to balance the demanding physicality of the boxing scenes while bringing charm and vulnerability to Creed’s romance with his neighbor Bianca (Tessa Thompson) is crucial to the movie’s success. 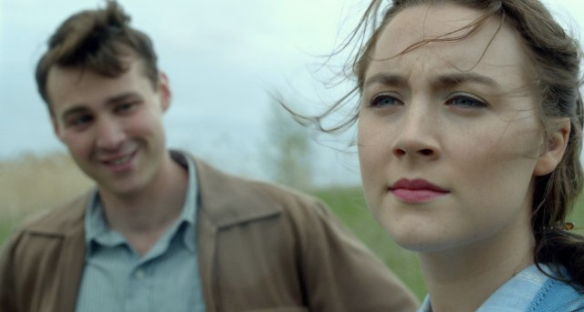 6. Saoirse Ronan- Brooklyn- Much of Brooklyn’s impact relies on Saoirse Ronan’s ability ability to make small moments carry a great emotional weight; her reading letters or deciding not to read letters, or sitting quietly at a dinner table as others gossip or pass judgment on her.  She plays Ellis, an Irish immigrant who comes to New York in the 1950s and makes a new life for herself.  She gets a job at a department store, goes to school for accounting and falls in love with a charming Italian man. John Crowley’s film is deceptively simple and impossibly delicate, and Ronan’s ability to inject joy, regret or sorrow into a moment using only her eyes is indispensable.

7. Meryl Streep- Ricki & the Flash- This tale of a wannabe rocker drawn back home by the family who cramps her style was made for someone with Meryl Streep’s inimitable screen presence.  She is the crucial link between director Jonathan Demme’s deft, observational eye and screenwriter Diablo Cody’s mordant snark.  In California, she’s guitarist/singer/store cashier Ricki Rendazzo.  Back home in Indianapolis, she’s Linda Brummel, a resented and resentful mother.  She was called back by her husband (Kevin Kline) to help her severely depressed daughter Julie (played by Streep’s real life daughter Mamie Gummer) cope after a divorce.  Her efforts at helping Julie regain her footing become a kind of redemption. Streep delivers the line “Sometimes a girl just needs her mother,” as if Ricki is trying to convince herself of her necessity more than anyone else.

8.Channing Tatum- Magic Mike XXL- Though it’s tempting to put a memorable duo from this movie here, Channing Tatum’s performance is a sweaty, kinetic burst of pure showmanship.  His effortless physicality and charm were destined for the Magic Mike movies, which centers on he and his male stripper cohorts’ ability to entertain both on stage and off.  This extra, extra large sequel puts their act on the road across the American South, giving Mike the opportunity to perform in a wider array of venues on his way to a male stripper convention. While Tatum took a shot at awards season prestige in last year’s Foxcatcher, he is much more suited to lighthearted fare like this.  He is a naturally gifted comedic actor and a bonefide action star, and here he gets a chance to flex both of those muscles.

9. Jessica Chastain- Crimson Peak- “The horror… the horror was for love.”  So says Lucille Sharp, the aptly named character that Jessica Chastain tears into in Guillermo Del Toro’s haunted house film.  Chastain brings a sinister, almost suffocating restraint to the role at first, which makes the movie’s unhinged conclusion all the more harrowing.  She manages to be the most chilling thing in a movie where someone finds a ghost in a bathtub with a hatchet in its head.

10.  Kevin Corrigan- Results– Andrew Bujalski’s off-kilter fitness comedy hinges on the relationship between Kevin Corrigan’s character Danny, a lonely schlub who just won the lottery, and a pair of personal trainers played by Guy Pearce and Colbie Smulders.  Danny moved from New York to Austin for a fresh start, and pays for two years’ worth of training sessions up front.  The night after his first session, he texts his trainer (Smulders) a picture of the pizza he’s eating.  Not long after, he’s smoking pot with her and trying to convince her to date him.  Corrigan brings deft, restrained comic timing to the role, subduing his characters’ outlandish behavior with a numbing melancholy. 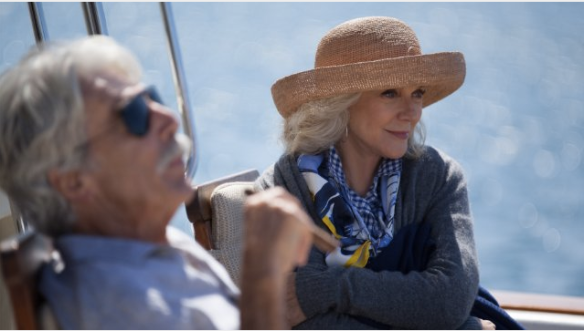 11. Blythe Danner- I’ll See You in My Dreams- There was another great Carol on movie screens this year, Blythe Danner’s warm, generous turn as the main character in Brett Haley’s underrated I’ll See You in My Dreams.  Carol is a widow, and though Danner brings an undercurrent of sadness to the role, the movie also insists on showing her lead a fulfilling life on her own.  Whether smoking pot and doing some late night shopping with her friends or falling in love with Sam Elliot (who is also great, by the way), Danner adapts to every situation the script throws at her while still anchoring the character.  However, it’s in a scene at a dive karaoke bar where she performs “Cry Me a River,” that Danner completely takes over the movie, letting Carol’s sorrow manifest in a beautifully cathartic way.

13. Charlize Theron- Mad Max: Fury Road- Though the Mad Max franchise was built on police-officer-turned-wasteland-wanderer Max Rockatansky, he takes somewhat of a backseat in the fourth installment in George Miller’s saga.  The secret lead in Fury Road is the Imperator Furiosa, a ferociously determined warrior attempting to rescue sex slaves from a demented warlord.  Charlize Theron nails every nuance to Furiosa while also keeping up with the movie’s relentless momentum; no close-up on her haunted, far away eyes goes to waste.

14. Teyonah Parris- Chi-Raq- Spike Lee’s blistering satire about gun violence rests on the shoulders of Teyonah Parris, whose performance walks a tricky line along the movie’s rhyming verse and frequent tonal shifts.  She effortlessly conveys the stubborn passion brewing inside Lysistrata, a woman who is inspired to lead a sex strike to force rival Chicago gangs (one of which is led by her boyfriend) to forge a truce.  This is a performance that calls for scenes of broad comedy, like one where she seduces and humiliates a Confederate-underwear donning Army official, and righteous fury, like when she confronts throngs of angry police officials and other men at that same Army base. This is a performance that calls for dance numbers, dirty talk and a sex off, where she and her boyfriend see who will give in to their lust first.  In Chi-Raq, Parris delivers the year’s most astonishing balancing act.

15. Bel Powley- The Diary of a Teenage Girl- Bel Powley gives a star-making turn as Minnie, a 15-year-old girl discovering her sexuality in 1970s San Francisco.  Powley brings the conflicting, often simultaneous impulses- confusion, anger, pleasure- that the role calls for and is crucial in helping writer/director Marielle Heller bring Minnie’s coming-of-age story to the screen without condescension or judgment.  Heller and Powley ground Minnie’s budding artistic impulses into the messiness of her relationships with her mother, her sister and her mother’s boyfriend.

Harrison Ford- The Age of Adaline

Sam Elliot- I’ll See You In My Dreams and Grandma 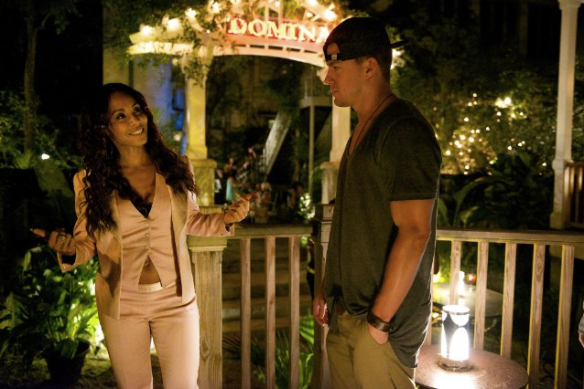 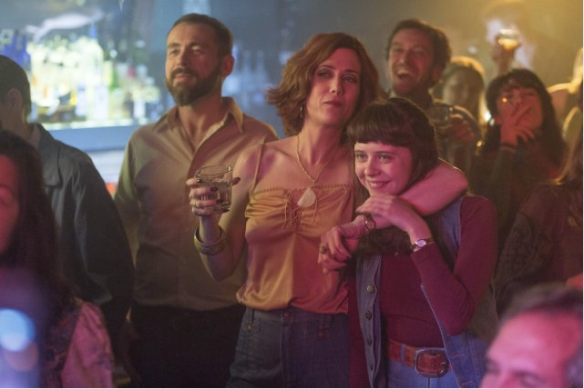 Kristen Wiig- The Diary of a Teenage Girl