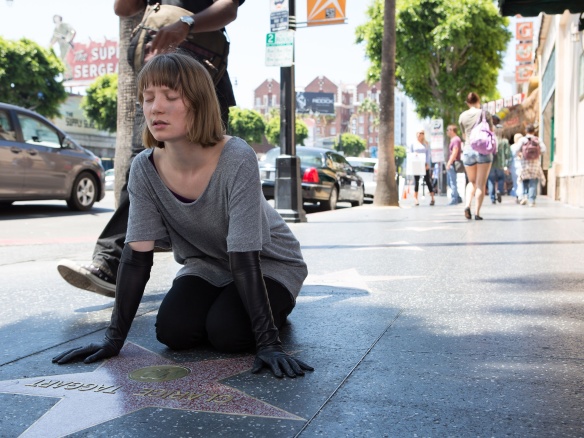 Maps to the Stars, David Cronenberg’s latest nightmare, is an emotionally violent, incestuous drama staged in the Hollywood Hills.  Like Paul Schrader’s recent The Canyons, this film’s Los Angeles has a radioactive glow; its bleached-out skies make it impossible to see where the sun is during the day, and neon colors pop during the few night scenes.  Its characters are an equally disturbed group of frigid psychopaths and tortured narcissists.  Some are both.

For how often the movie is dominated by daylight, many of the characters look (and behave) like vampires trapped in the sun, or ants being fried by a magnifying glass.  One of them, Agatha (Mia Wasikowska), even has visible burn marks on her neck and the left side of her face.  Her brother, troubled teen star Benjie Weiss (Evan Bird), is the only noticeably tan one, and he’s also the most well-adjusted to the movie’s world of tormented excess.

Benjie went into rehab for drug addiction right after starring in a very lucrative children’s movie about a bad babysitter (he played the bad babysitter).  We first see him visiting a terminally ill girl in the hospital, and he’s nice to her in the fake, PR way celebrities are trained to be nice (he offers her an iPad).  Outside the hospital afterward, he goes on a vicious tirade after learning she had non-Hodgkin lymphoma instead of AIDS.  He perceives the former as not worthy of his time.  After the girl dies, she appears to him as a ghost, her elaborate astrology tattoos and vague taunts pushing him to the edge of madness.

Both of the big celebrities in Cronenberg’s fictional Hollywood are taunted by ghosts.  The other, aging actress Havana Segrand (Julianne Moore), sees her mother (Sarah Gadon), who was killed in a fire at the height of her fame and beauty.  She lives on now in her daughter’s head, and on black-and-white reruns on TV.  Havana hopes to play her character in an upcoming remake of one of her films.  She wants the role despite numerous talk show appearances detailing the emotional and sexual abuse she suffered at the hands of her mother.  Her ghost denies the abuse, saying she’s misremembering it and it’s something her stepfather probably did to her. 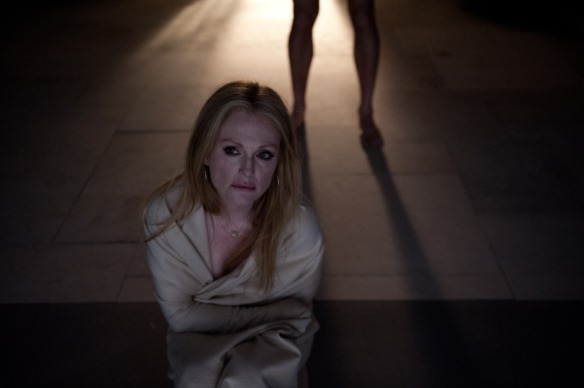 Moore gives a brutal, merciless performance here, playing a woman who is gradually unraveling at the thought of no longer getting movie roles as she reaches 50.  If Valerie Cherish of HBO’s The Comeback was stripped of any sympathy and dignity, this would be her.  Havana is ruthlessly mean and unhinged; at one point she sings and dances after the actress who got a part instead of her suffers a devastating loss and is unable to do the movie.  She’s the kind of character you’d want to keep your distance from in case she spontaneously combusts.

Like Keira Knightley in A Dangerous Method or Jeff Goldbloom in The Fly, this is exactly the kind of performance that Cronenberg loves to lavish with close-ups.  It’s wildly over-the-top, as is much of Bruce Wagner’s screenplay, and that’s the point.  This is a character who is introduced to us crying as her New Age self-help guru (John Cusack) applies pressure points on her nearly nude body and talks to her about her mother.  Nearly every major character is involved in some kind of incestuous subplot; the ghost of Havana’s mother gives her a sensual massage and replaces another woman in bed during a threesome; Agatha and Benjie are in love and their parents, played by Cusack and Olivia Williams, are brother and sister.

Maps to the Stars is a collection of subplots, and no character’s arc dominates the movie. Wagner’s overwrought dialogue is interspersed with a mythic, almost spiritual quality at times.  In one scene Agatha hovers over Havana’s mother’s star on the Walk of Fame, chanting a demented poem:

On my school notebook, on my desk and on the trees, on the sand and in the snow I write your name.

On all the flesh that says yes, on the forehead of my friends, on every hand held out I write your name: Liberty.

Agatha recites variations on this Paul Eluard poem throughout the movie; although she’s never expressly referred to as a ghost, she acts like one.  She is the only character who seems to have ever existed outside of Los Angeles.  She returns after spending much of her childhood in a mental institution, where she was placed by her parents after trying to light the house on fire with her brother inside.  Her Twitter connections with Carrie Fisher (who makes a brief cameo) land her a job as Havana’s assistant.  This allows her to stalk her family from the periphery and then reinsert herself back into their lives.

Cronenberg’s approach to the material makes it an uncomfortably clinical study of death and ego. There’s an eerie chill running up this movie’s spine, which offsets the volatile and sometimes overblown script. Cronenberg and cinematographer Peter Suschitzky don’t focus on the people as much they do on making them seem at one with the ornately designed interiors. They squirm, they kick and scream and kill and die, but they never seem out of place. Even the ghosts blend in.

2 thoughts on “REVIEW: Maps to the Stars”