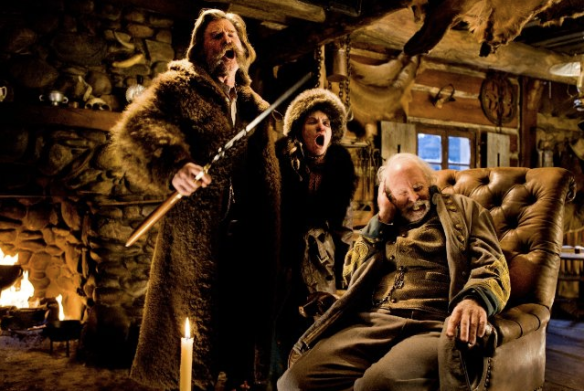 The Hateful Eight is Quentin Tarantino’s most punishing film, both in terms of length and content.  His eighth feature is a three hour chamber drama that crams post-Civil War America into a cabin during a blizzard and watches as its characters tear each other apart. It seems made with a sinister glee that antagonizes the viewer more than it entertains, coaxing uncomfortable laughter and squirms as it becomes more and more sadistic.

Though much of The Hateful Eight takes place in the same room, it begins in the snowy Wyoming wilderness.  A black Yankee soldier-turned bounty hunter named Major Marquis Warren (Samuel L. Jackson) crosses paths with a stagecoach carrying three white people: a driver, another bounty hunter and his bounty.   Warren himself is hauling a few dead bounties with him, but the other bounty hunter, John Ruth (Kurt Russell), prides himself on taking his in alive so they can hang.

Alive does not mean unscathed, as Daisy Domergue (Jennifer Jason Leigh) finds out the hard way.  Ruth beats her repeatedly throughout the film, mainly after she speaks while men are talking. Part of what makes The Hateful Eight such an uncomfortable film is how it seems to both confront and indulge in its own brutality.  Daisy’s first beating comes after she calls Warren the N-word; it’s played as cathartic, but then Tarantino lingers on a close-up of Jason Leigh’s face as the stagecoach moves forward.  Even as she is continuously brutalized, Tarantino and Jason Leigh counter those scenes with moments of disarming humanity.

The first two chapters of of the movie’s six take place on that stagecoach; Domergue watches (even though the movie is mostly scenes of men talking, she is often lingering prominently in the frame observing and reacting) as Warren and Ruth talk about their shared profession. They eventually stumble upon another passenger, a man named Chris Mannix (Walton Goggins) who claims to be the sheriff of the town where Daisy is heading to be hanged.  The third and longest chapter marks their arrival at Minnie’s Haberdashery, the aforementioned cabin where another batch of hateful men (played by Bruce Dern, Demian Bichir, Tim Roth and Michael Madsen) are also waiting out the snow storm.

As the blizzard pummels the cabin, a conspiracy emerges inside the cabin to free Daisy.  The movie’s biggest strength is in that mystery, and the characters are so finely acted (save for Roth’s Christoph Waltz impression) that it partially saves the movie from its many flaws.   Tarantino uses the large scale 70mm format primarily for his talented ensemble’s weathered faces; Jackson, Jason Leigh and Russell are all lavished with close-ups throughout.  The program that accompanies special 70mm “Road Show” screenings of the movie compares it to epics like Lawrence of Arabia and Gone With the Wind,
saying the format is meant to make the viewing experience more of an “event.”

The Hateful Eight is epic only in length, not scale. Its gore, while still stylized like in Tarantino’s other films, happens in briefer bursts, save for a scene in the second half where a couple of characters vomit blood everywhere. The carnage interrupts scenes of sustained, sometimes painfully long conversation. I never thought I’d say this about Tarantino’s dialogue, but much of the first act felt tedious because of how heavily he relies on it.  The movie’s second half is much, much better; its big twists made me want to rewatch the first act to see if it flows better after knowing everyone’s secrets.

Tarantino punishes same-sex sexual assault in a prolonged and grueling fashion (see also: Pulp Fiction); I can’t think of a single consensual gay sex act in any his films.  As his formal gifts as a director appear to evolve with each film, he seems stubbornly stagnate when it comes to morality.  Instead of listening to his detractors, he doubles down.  The Hateful Eight is a sophisticated, claustrophobic death crawl that also seems to egg on his critics. The first few (of many) uses of the N-word are uncomfortably and inexcusably played for comedy.

Rich Juzwiack writes more about Tarantino’s obsessive use of the word at length in Gawker:

If it is a matter of historical accuracy that Samuel L. Jackson’s character should be referred to as such dozens of times, the presence of modern phrases like “fucked up,” and “I don’t know about all that” suggests a selectiveness when it comes to keeping the language in step with the time portrayed.

The Hateful Eight’s last chapter is called “Black Man, White Hell.”  Warren, bleeding out in bed, and Domergue, shackled to a dead man, are ultimately left at the mercy of a wounded white guy.  The story’s violent conclusion is appropriately horrifying, filmed at an agonizing, mercilessly close proximity to the carnage.  Slowing down the break-neck pacing of his other movies allows Tarantino’s mastery with actors and atmosphere to come to the forefront.  Unfortunately, he overindulges in his flaws as well.