A recurring theme in Clint Eastwood’s films is the intersection of an individual with their public image and the scrutinies that follow it.  American Sniper is another rumination on this theme, a weary dissection of the American soldier dressed up as a chest-thumping defense of the War on Terror.  Adapted from a 2012 memoir of the same name, Eastwood’s latest tells the story of Navy SEAL Chris Kyle (Bradley Cooper), the deadliest sniper in U.S. military history who participated in nearly every major phase of the post-9/11 war in Iraq.

We first see Kyle as we saw him in the movie’s nail-biting trailer, examining a Marine convoy from a rooftop and watching as a child and his mother exit a building with an explosive device.  She hands it to him, and Kyle has to make the call on whether or not to pull the trigger.  He does, not once but twice, shooting the child and then the woman right as she prepares to toss the device.  It explodes inches from the convoy he was protecting.

Before showing this, though, Eastwood flashes back to Kyle’s childhood; as his finger hovers over the trigger in Iraq, there’s a startling jump cut to a scene of him as a child shooting a deer with his father.  This jump serves two purposes: to illustrate Kyle’s origins as a skilled marksman and to show how he’s viewing his human targets on the battlefield, at least at the beginning of his first tour.  On more than one occasion in the movie he calls the Iraqis “savages,” meaning he views them as less than human.

American Sniper, like Martin Scorsese’s recent The Wolf of Wall Street, does not explicitly decry the often-horrifying actions it portrays, and so it’s being seen by some as endorsing that behavior.  Even more troubling, though, are the people who view Kyle’s aggressive rhetoric and violent actions as a purely positive and inspiring part of the movie.  Kyle viewed himself as a Christian warrior, and his Islamophobia is referenced in the movie but it’s not something that I believe Eastwood shares, at least not nearly to the same extent. 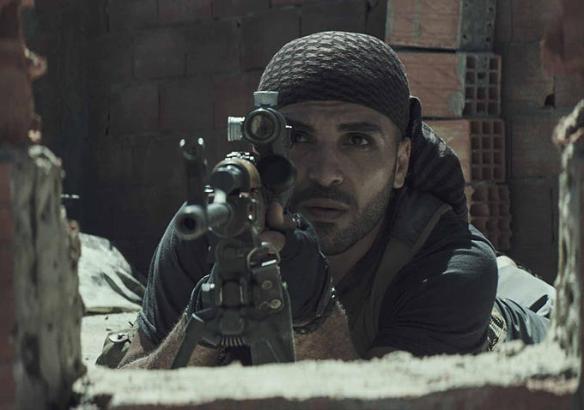 The Iraqi insurgents in the movie are vague, evil caricatures who have little dialogue and are killed either off-screen or from afar.  Eastwood could be fusing his film with Kyle’s point of view, but then the reductive portrayal isn’t consistent when his view of war is complicated, either.  That being said, the movie’s most disturbing moments involve the horrifying consequences that the U.S. occupation of Iraq had on the country’s civilians.  Perhaps the most troubling of these involves a high-ranking insurgent nicknamed The Butcher using a power drill to torture and kill an Iraqi boy in front of his father.  Kyle and the other soldiers are pinned down by an enemy sniper while attempting to get to the boy before he’s killed, but they fail.

This is one of the major moments in the movie where Kyle is confronted with the humanity of those he has been trained to dehumanize.  When he returns to the sunny Texas sprawl after each of his four tours overseas, he suffers from increasingly intense bouts of post-traumatic stress disorder.  He is heralded as “The Legend” and lauded by both high-ranking officials and other soldiers he saved in Iraq while also attempting to repress and conceal the private hell in his own head.

If the clash of public persona and a character’s private life is at the center of many of Eastwood’s films, then that conflict is almost always sparked by a kind of toxic American masculinity.  More than the political deceit that went into the Iraq War, Eastwood is concerned with examining the conflict on a personal scale, from Kyle’s brutal reputation in combat to the fraught but ultimately loving relationship with his wife Taya (Sienna Miller).  As Nicholas Schmidle wrote in a profile of Kyle in The New Yorker after his death in 2013, “it was hard [for Kyle] to let go of being a hero.” 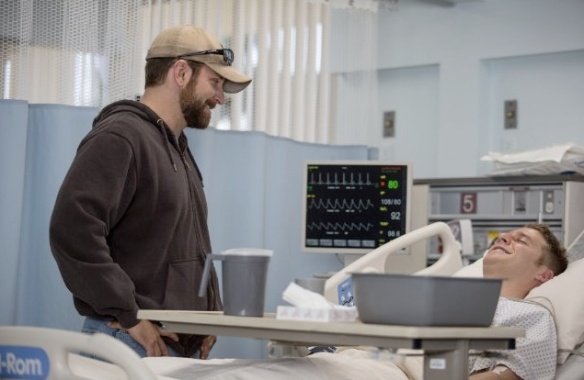 Schmidle was referencing Kyle’s work with disabled veterans after his time in combat ended, and the quote sticks out more in light of Eastwood’s film.  During one scene in the movie, an injured soldier comes up to Kyle and his young son at an auto repair shop and thanks him for saving his life in Iraq.  There’s a brief but crucial cut to Bradley Cooper’s face here that completely transforms the dynamic of the scene.  Right as the man calls him a hero, we see Kyle’s eyes go far away and his face stiffen as he registers what exactly that means.  Can the man who shoots and kills a young boy who is not much older than his son ever accept such a label?

“When you’re in a profession where your job is to kill people, you start getting creative,” Kyle wrote in his memoir.  Two paragraphs after Schmide uses that excerpt in his article, he dissects it, writing “Kyle seemed to consider himself a cross between a lawman and an executioner.”  Eastwood is also grappling with Kyle’s own self-characterization and its contradictions while at the same time showing his unparalleled contributions in combat (he is credited with more than 160 kills). His movie’s specific focus on a soldier who believes wholeheartedly in his country and the mission in Iraq only serves to complicate the narrative when war takes its inevitable toll.  Kyle was not killed overseas, but by a combat veteran also suffering from PTSD who he was trying to help.

As effective a marksman as Kyle is, American Sniper inevitably shows a lose-lose scenario of American invasion and occupation.  It is obviously horrifying to the civilians of the country we invade, but it is also devastating to soldiers and their families when they return home adrift in their own heads, reliving what they’ve done over and over.  It is sympathetic to the unfathomable traumas of war but it also does not excuse or endorse its soldiers’ Call of Duty fantasies. Just like Eastwood’s Unforgiven and Gran Torino, American Sniper is, in part, an examination of the facade of the American cowboy.  It’s the story of a man who idealizes a myth of his country and comes to understand the complexity of that myth.