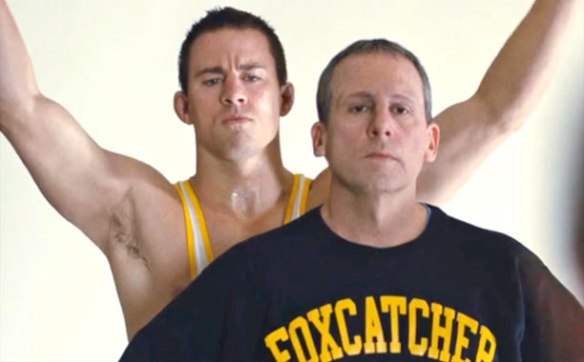 I have major issues with Foxcatcher’s portrayal (or maybe I should say its incredibly vague non-portrayal) of homosexuality.  One of the lead characters, John du Pont (Steve Carell), is a deeply closeted man who cloaks his shame in patriotism. This should sound familiar to anyone who watched Clint Eastwood’s biopic J. Edgar, a much better film that balances the intolerable pain of the closet with the unforgivable decisions J. Edgar Hoover made as director of the FBI.

As with Bennett Miller’s two previous features, Capote and Moneyball, Foxcatcher is based on a true story and filmed with a restrained, melancholy stillness. The main crux of the plot is that du Pont uses his vast wealth to lure gold-medal-winning wrestling brothers Mark and Dave Schultz (Channing Tatum and Mark Ruffalo, respectively) to his compound to train for the 1988 Olympics in Seoul.

Du Pont is a very creepy man whose air of entitlement leads him to cross personal boundaries and, in the end, devolves into violence.  All three main actors are quite good, especially Tatum and Ruffalo.  Carell gives a sinister performance behind bad make-up and prosthetic work, although a key part of his character’s creepiness is that it’s equated with homosexual desire.

For Out, Armond White wrote an intense take down about how Foxcatcher promotes gay pathology:

The true-crime aspect of Foxcatcher is less interesting than the bizarrely closeted spectacle Miller makes of it. As written by E. Max Frye and Dan Futterman, this film is not sympathetic to the tyranny of the closet or even panicky homosocial athletics. It takes the real-life tragedy and teases about its gay subtext. 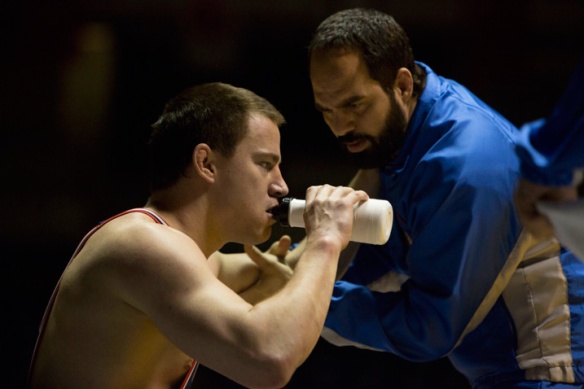 Miller remains a director of bleak precision even with a script and lead performance that put quite a damper on the final product.  His long, drawn-out scenes create a mounting sense of dread and he films the ornate spaces of the Foxcatcher estate with a lived-in remove and a slightly uncomfortable sense of familiarity.  The sun never seems to peek out from behind the clouds here, and many of the  images Miller and cinematographer Greig Fraser create are beautifully faded.  An extended sequence where du Pont frees his mother’s world-class race horses out of their stable is elegiac and haunting.

However, as White argues, it’s Miller’s tasteful restraint that ultimately makes Foxcatcher homophobic.  In one particularly disturbing sequence, du Pont takes Schultz to train in the middle of the night, and it’s filmed as if they’re having sex, with du Pont gently thrusting on top.  The wrestling mat is bathed in shadow and it’s filmed at a clinical distance, until Miller cuts to a close-up of Tatum’s sweaty, uncomfortable face.  Foxcatcher goes out of the way not explore the link between repression and violence, instead suggesting that homosexuality is just a key contributing factor to du Pont’s creepiness.