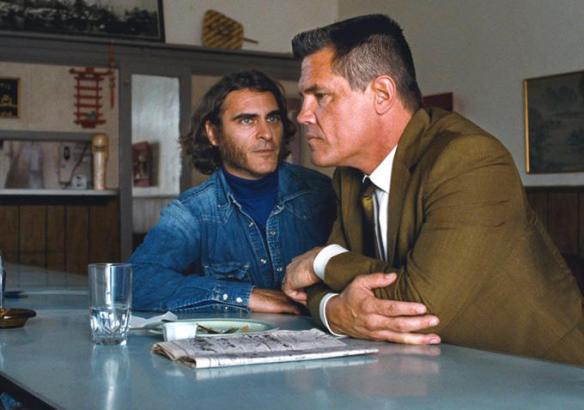 Paul Thomas Anderson’s Inherent Vice, like the Thomas Pynchon book it’s based on, is a peace sign followed by a middle finger.  Toward the end of the movie, private Investigator and relentlessly chill dude Doc Sportello (Joaquin Phoenix) flashes both of those to a mother and her children in a vacant parking lot as they carry away several kilos of cocaine from his vehicle to theirs.  They’re members of the Golden Fang, which during the course of the long and winding narrative evolves from the name of a boat to the name of a drug syndicate to a warped, corporate state of mind.

Doc is placed on this perpetually confusing road by an ex-girlfriend, Shasta Fay Hepworth (Katherine Waterston), who tells him of a wife’s plot to throw a wealthy realtor into the loony bin and make off with all his money.  From there the movie trapezes through an intricate and head-spinning web of other similarly bizarre set-ups — a brothel very poorly disguised as a massage parlor, a Hippy Last Supper with musicians and Nazis (and probably some who are both), a mental institution called “Straight Is Hip.”

Inherent Vice is a view of hippy life at the dawn of the ’70s that is both giddily stoned and wearily mercurial, a noir about investigating who is responsible for killing an era’s buzz. Anderson doesn’t attempt to tame the equally messy plot of the book, and instead embraces it.  This is the first time anyone has adapted a Pynchon novel into a movie, and Anderson fuses the author’s sad, trippy prose with his own artistic sensibility.  Joanna Newsom narrates some of the more poignant passages from the book, about “American life being something to escape from,” or “a land almost allowed to claim its better destiny.” 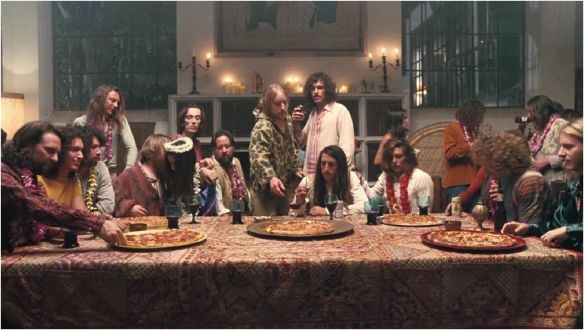 Of course Inherent Vice places a lot of blame for the encroaching anti-chill on the police, personified by the chocolate banana philating, cartoonishly short-fused detective Bigfoot Bjornsen (Josh Brolin).  Bjornsen lives to complicate and obstruct Doc, to belittle his lax hippy foolishness with a slight twinkle of envy in his eyes. By the end, they share a moment of bewildering, pot-chomping understanding akin to the final scene between Lancaster Dodd and Freddie Quell in Anderson’s The Master.

Each encounter Doc has in the movie becomes its own stoned vignette in Los Angeles’ endless supply of beaches, house parties, diners and dentist’s offices.  The fictional Gordita Beach feels both shiny and faded, and the music switches between a sublime rock, soul and folk mix and another of Jonny Greenwood’s humming, agitated electronic scores.  Rather than standard shot/counter shot interview scenes, Anderson begins several of these prolonged conversations at a distance before slowly zooming in, drenching the movie in far away nostalgia before honing in on each actor’s finely calibrated combination of suspicious glances and belligerent gestures.

The precision of each performance, how nearly every actor but Phoenix does so much with so little screen time, is astonishing.  This is especially true of Waterston, whose extended presence in two major scenes is captivating and surreal. Her scenes with Phoenix are played close (one of them very close) and the two performers fill the sporadic relationship with sexual familiarity.  Doc isn’t really chasing answers; he’s chasing that time a Ouija board led him and Shasta out into the rain in pursuit of a good high to make the sex better.