Seth Rogen and Rose Byrne are disarmingly excellent in Neighbors.  Their performances are so fluid and in sync that they take what would otherwise be an amusing, sometimes audacious series of physical gags and ground it with their portrait of a convincing young marriage. The poster sells a macho showdown between a millennial frat boy (Zac Efron) and a pothead-turned-dad (Rogen), and while that feud is very much at the core of the movie Byrne’s character is in on the raunchy scheming, too.

Andrew J. Coehn and Brendan O’Brien’s script switches effortlessly between the two worlds next door to each other.  Mac (Rogen) and Kelly (Byrne) are a younger couple who moved to suburbia to “grow up.”  Not long after they move in, Teddy Sanders (Efron) and his frat brothers turn the house next door into a non-stop rave.  The movie leans heavily on their somewhat elaborate frat party set pieces, with a blacklight rave and Robert DeNiro-themed mixers.

Nicholas Stoller, the director, balances the overstuffed script into a concise, lethal comic package.  There are a few uncomfortable homophobic joke set-ups, which don’t work because those laughs are built on a justified straight male fear instead of it being mocked.  The movie also shamelessly flaunts Efron and its other frat boy eye candy, simultaneously inviting me to stare and then making me feel weird about it. (I still did it.)  It affords Byrne’s character a wonderful opportunity to take down bro comedies for treating female characters like naggy garbage, so it was a little disheartening that the movie didn’t address this behavior, too. 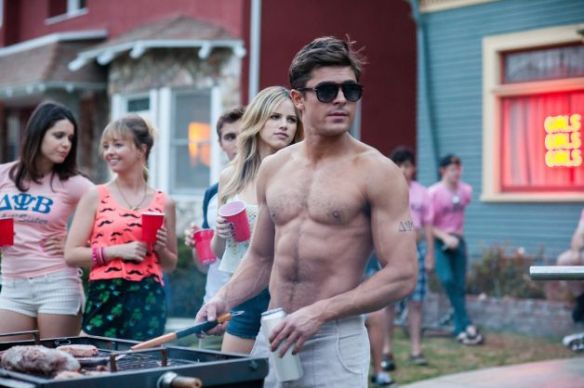 Neighbors really shines when it shamelessly takes its other joke conceits to extremes.  The blacklight party scene in particular is one of the most well-executed comedic scenes of the year.  It’s a debauched, neon-tinted revelry that Stoller films with visual panache .  Mac, Kelly and their friends attempt to sabotage the fraternity so they will get “strikes” with the university and move out of the house.  Rogen and Byrne are great at unleashing their characters’ repressed wild sides, either in an attempt to not be lame or attempting to one-up the bros.

Efron also tears through the movie as the ringleader of Delta Psi, using considerable showmanship to sell the often overdone frat bonding moments.  He is a relentless physical presence, which meshes nicely with Rogen’s calmer stoner dad character.  Their performances, along with Byrne’s and Dave Franco’s, help highlight the wealth of comedic set-ups instead of the underdeveloped and rushed story.