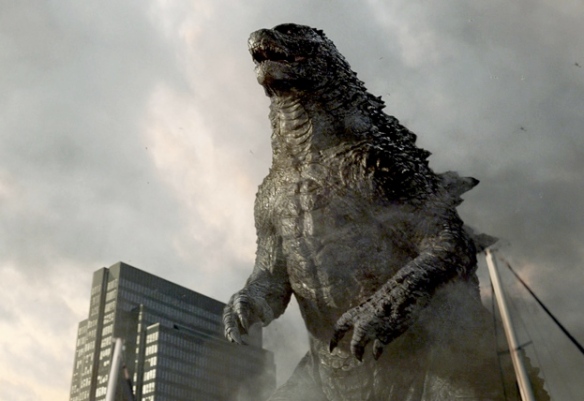 The 1998 iteration of Godzilla will always hold a special place in my 7-year-old heart.  It is one of the first PG-13 movies I remember seeing in the theater, and the first thing I wanted to do afterward was go out and buy all of the Godzilla toys (yay, product tie-ins!).  Of course, watching that version years later isn’t good for much else but that memory.

Because of that movie, however, I also rented countless other old Godzilla movies, where the nuclear dinosaur faced off against city-eradicating nemeses like Mothra, Rodan, Bollante, Gigan, Mechagodzilla and, of course, King Kong.  I watched those showdowns indiscriminately alongside the English language remake of the original, reenacting the battles with toys and imagined skyscrapers.

None of those action-figure-ready opponents show their faces in this newest Godzilla, and the primary moods are dread and terror rather than the cheesy sense of awe that the dozens of Godzilla films created in children. Here, it shows a young boy watching the news, eyes widened, as monsters stomp around Honolulu.  “Mommy look, dinosaurs,” he says, unsure if it’s a movie or not.  Of course, his mother knows it isn’t a movie, but she doesn’t quite seem to believe it’s real, either.

The harsh-looking insect creatures that the King of Monsters squares off with here are called MUTO’s, a military-coined acronym that stands for Massive Unidentified Terrestrial Organism.   Both Godzilla and the MUTOs are astonishingly (and strategically) rendered.  Gareth Edwards, like many good creature feature directors, toys with the idea of giving a full-on view of the creature, taking the point of view of the humans as they watch it on TV around the world or run for their lives (Matt Zoller Seitz writes more on that in his excellent review). It isn’t until nearly halfway in that he gives Godzilla his close-up with that gigantic roar.

Godzilla thankfully dominates that second half, (spoilers) because by that point much of the pedigree cast is either killed off or given nothing interesting to do.  Sadly, the movie’s weakest performance is also its most important.  Aaron Taylor-Johnson seems almost uncomfortable as the buff center of attention here; his generic, nearly interchangeable expressions and line readings only get worse in the face of talent like Bryan Cranston, David Strathairn and Elizabeth Olsen.  Other gifted performers like Juliette Binoche, Sally Hawkins and Ken Watanabe have even less to do.

Edwards directs the movie with a sense of dark grandeur that covers up that bland central performance as much as possible.  The monsters and their destruction are immaculately scaled; watching Godzilla’s back spikes slink menacingly  toward San Francisco, dwarfing the Navy ships that flank him, is just as satisfying as seeing those same spikes light up before a burst of radioactive blue flame.  Gazing down his throat as he lets out an unstoppable wail is also just as jaw-dropping as seeing him stand next to a tank-covered Golden Gate Bridge.

In this installment, Godzilla is a savior of sorts.  His destructive path is a by-product of him trying to kill those giant bugs before they mate.  Max Borenstein’s script is laden with nuke-wary monster metaphors; the MUTOs feed off radiation, so they gravitate toward weapons and power plants.  Edwards utilizes that script to create an ideal perspective by which to convey the monsters.  Incidents like a train transporting a nuclear missile to the ocean or soldiers parachuting into San Francisco allow new, terrifying points of view on the creatures and their destruction rather than developing the overstuffed cast of human characters.

Throughout those scenes of futile human resistance and insect/dinosaur throw downs, Alexandre Desplat’s score is invaluable at balancing the action movie momentum with wide-eyed terror.  The aforementioned scene where soldiers prepare to parachute into San Francisco is given a terrifying new dimension as operatic voices begin a wind-like chant.  Even with a central character that’s little more more than beefed-up nothingburger, moments like this revitalize the somewhat tarnished monster’s good name.