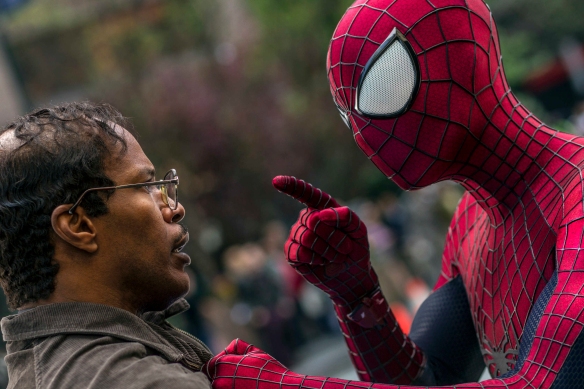 The Amazing Spider-Man 2- Peter Parker is much more interesting than Spider-Man in this sequel to a reboot.  In fact, Parker (Andrew Garfield) and his on-again, off-again soul mate Gwen Stacy (Emma Stone) seem to be acting out a completely different movie, a romance with genuine warmth and feeling.  The rest of the movie is a straightforward superhero mash-up, with generically assembled fight sequences and standard villain templates (maniacal corporate brat, vengeful outcast, Russian gangster).  It’s fairly easy to see where director Marc Webb’s heart was while making this mega-budget spectacle, but there are too many movies here trying to cram into one. Grade: C

The Grand Budapest Hotel- Wes Anderson’s latest is a kinder, gentler middle finger to his detractors than Lars von Trier’s Nymphomaniac.  He is one of the most recognizable  formal stylists of his generation, and The Grand Budapest Hotel is no exception.  He dives through various historical time periods with well-choreographed confidence.  Each period is shot in the aspect ratio of the time, and though they each feel distinct they also feel uniform.  His worlds are bright, elaborate concoctions often offset by the quiet, emotive deadpan of many of the characters.

Grand Budapest Hotel is mostly the story of a very loud, flamboyant man, though.  Gustav H. (a fantastic Ralph Fiennes)is a European hotel concierge on the brink of World War II.  He and is lobby boy Zero (Tony Revolori) are caught up in a fascist plot involving the murder of H.’s elderly mistress and a Renaissance painting called Boy With Apple.  Gustav’s story is told from the  perspective of Zero.  He recalls their story years later to a writer, who is in turn recalling that experience many years later.  (Their is also a young girl reading the book that that writer wrote).  This is a wildly entertaining movie about how a story is framed, and a self-reflexive look at its director’s own storytelling prowess. Grade: B

Bad Words- This is a morally repugnant film about a foul-mouthed adult entering a children’s spelling bee.  Bad Words hinges on an audience member’s willingness to laugh along with a racist, sexist man-child and then subsequently feel bad that his father abandoned him.  Guy Trilby (Jason Bateman, who also directed this) is not satirized but sympathized with, and his emotional motivation is portrayed as mysterious and important.  This apparently entitles him to lash out at everyone else who is different than him, making stale, unfunny jokes about a young Indian boy and the female journalist following him through the competition.  Bateman’s direction is assured and polished, especially the economical way characters are established and developed during the spelling bee.  However, his directorial debut is in the service of a script that is indefensibly awful.  Grade: D-

Divergent- Divergent is an occasionally immersive teen dystopia told in a generic and often flat way.  The actors seem shackled to the script instead of being allowed to fully interpret it (the camera too, for that matter).  This is most noticeable with the performance of Kate Winslet, whose endlessly expressive range is trapped in an unforgiving, stale villain role.  She looks like she wants to run off the set at any given moment.  Thankfully, Shailene Woodley is very good as the main character Tris, a girl forced to choose her path in life before she knows herself.

Tris is “divergent,” which means she doesn’t fit into any of the different factions available to her in this society.  This is a story of identity set against the backdrop of forced post-apocalyptic sameness.  The movie, directed by Neil Burger, seems to hit its stride during an energetic game of “Capture the Flag” that Tris and other initiates play with her faction.  For the most part, though, Divergent is largely uninspired. Grade: C+