One of the most wildly talented performers working today, Tilda Swinton brings the utmost care to every movie character she portrays.  Whether it’s glossy Hollywood productions like The Curious Case of Benjamin Button, intense indie grime like Julia or a seductive romance like the Italian drama I Am Love, Swinton truly transforms on the screen.  She makes every character, no matter how weird and despicable, inescapably human.  Often pidgeonholed as an Ice Queen after playing them (sometimes literally) in movies like Burn After Reading, Michael Clayton and The Chronicles of Narnia, the truth is that Swinton simply has more emotional range and capacity for risk-taking than anyone else currently working in her profession. 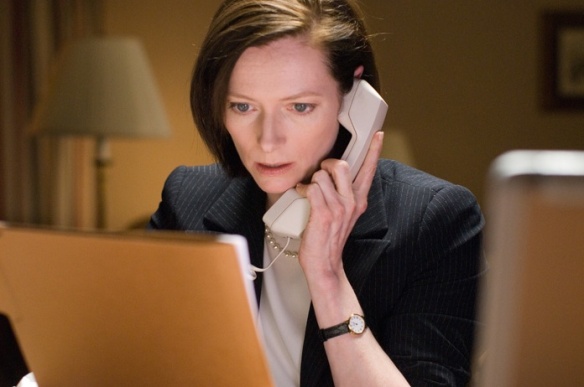 Michael Clayton- Movies like this don’t intend to become a showcase for acting, yet Swinton steals every scene she is in, Clooney be damned.  As cutthroat corporate executive Karen Crowder, Swinton shows us a woman whose every ferocious stroke is driven by desperation.  For every scene showcasing her aggressiveness,  there is one that undermines it, including the legendary final showdown between her and the title character.

Julia– One of Swinton’s most overlooked performances is her portrayal of this delusional alcoholic who kidnaps a young boy.  On the surface she claims to be doing it for the boy’s mother, her sort-of friend from AA, so she can reunite the two.  Really, though, it’s all about greed.  Using the boy to extort money from the wealthy criminals he’s related to, she quickly finds herself on the run and in way over her head.  Director Erick Zonca paints an unrelentingly tense picture of a despicable soul, but thanks to Swinton we can’t look away even though with a character like Julia there’s little else to do. 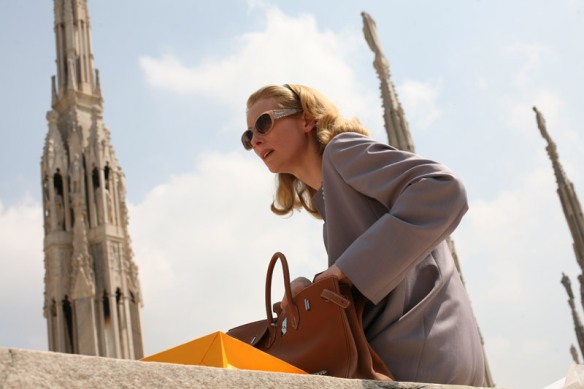 I Am Love– To become this Russian woman trapped inside the unhappy confines of her wealthy husband’s family in Milan, Swinton not only learned Italian, but added the accent.  It’s a remarkable performance just knowing that, but she also brings Emma Recchi to life.  Quiet and reserved in the beginning, Emma gives way to her lust for one of the cook’s in the kitchen.  The movie holds little back in displaying their affair and the emotional turmoil that ensues, but it’s so wonderfully filmed, paced and acted that it strays away from melodrama.

We Need to Talk About Kevin– This movie, unlike I Am Love, does occasionally give in to melodrama.  How can a movie about the mother of a school shooter not do that, though?  It’s no fault of Swinton’s that the movie offers no easy way in.  Her performance as Eva is so good that you notice the utter lacking of the rest of the cast, especially their tendency to become caricatures.  It makes sense, then, that We Need to Talk About Kevin is most thrilling in the aftermath of the shooting, when the story focuses mostly on Eva’s isolation and whether or not she deserves it.

The Curious Case of Benjamin Button- David Fincher’s examination of life lived backwards threw many off guard with its slow, deliberate pacing.  At the center is Brad Pitt’s digitally-enhanced performance as Button, but on the outskirts are several extraordinary humans living more typical versions of life.  One of those is Elizabeth Abbott, a lonely middle-aged woman that becomes Benjamin’s first affair even though he looks older than her.  Swinton captures Abbott’s isolation effortlessly, creating a deeply haunted woman filled with regret that she assumes her lover also shares.

Other notable performances:  Broken Flowers, Burn After Reading, The War Zone, Adaptation, Moonrise Kingdom, The Chronicles of Narnia: The Lion, the Witch and the Wardrobe