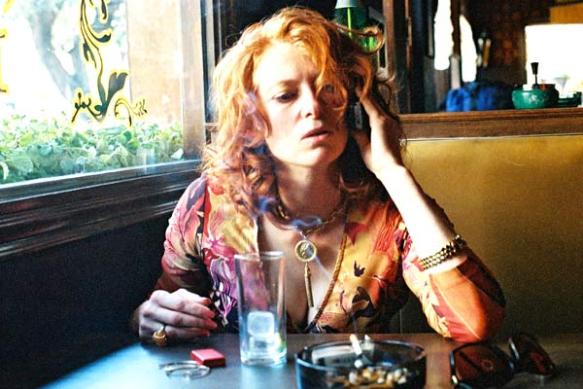 Make no ifs, ands, or buts about it: Tilda Swinton is one of the finest actresses of her generation.  So sublime and brilliant is her technique, that even in a dud like The Lion, the Witch, and the Wardrobe she manages to give you something to watch.  And then there is Julia, a movie that is actually good, where she inhabits the heart and soul of her character, leaving you stunned, disgusted, and many other things by the time the credits roll.

As the title character, Swinton plays an alcoholic nothing hired by a neurotic Mexican neighbor (Kate de Castillo) to kidnap her son and reunite them across the border.  This plot seems like something you’d see in a glitzy Hollywood caper, and the characters in Roger Bohbot and Michael Collins’ screenplay seem conscious of it.  When Julia tries to explain the scheme to some of her confidants, they look at her like she’s a fool, which she is.

This sly critique of the Hollywood mainstream is one of the smaller pleasures you’ll find in a movie this unrelenting and entertaining.  You wouldn’t expect to be enthralled by a character this despicable, and not since Charlize Theron in Monster have I been drawn to such a fiery, destructive female like this.  You’ll feel sympathy for her, and it will disgust you.

Such is Swinton’s gift, and as you can see in this review, I can’t say enough positive things about her performance.  This is the kind of role you expect to be snubbed by the Oscars because of how good it is.  Unfortunately, the rest of the cast is below her.  It’s not a big deal because she is by far the most important character in the movie, but it would’ve been nice to give some equals to spare with.  Having none in this case is a drawback.

The filming style of Erik Zonca can be both documentary-like and at times gripping.  We follow our alcoholic protagonist yelling annoyingly through a California nightclub.  As the Eurythmic’s “Sweet Dreams (Are Made of This)” begins playing over the jukebox, a sense of dark irony that doesn’t leave hangs over the film like a storm cloud.

As we follow Julia through what seams like a typical night for her- boozing and screwing, then paying for it – we encounter the kidnapping scheme almost randomly.  She is ambushing the boy (Aidan Gould) in the forest with a gun and a black mask almost before we know it.  The wealthy grandfather keeping him away from his mother is nowhere to be found, but an escort whom Julia runs over twice is.

With the boy in tow, she sets out on an outlaw journey that lands her across the border with or without the mother’s knowledge.  Julia attempts a ridiculous double-cross to try and maintain money when she finds out the woman cannot pay; another Hollywood standard made to look disgusting and stupid when viewed through Julia’s lens.

Structurally, I was surprised to be engaged in a movie like this for two and a half hours.  Had anyone but Swinton been in the title role I probably wouldn’t have been, but she is that rare actress that keeps your eyes glued on her even when what she is doing is grotesque.  The movie doesn’t treat her with sympathy, but it doesn’t focus only on her evils either.  What we see here is the portrait of an entire human being in the midst of a violent journey into the heart of herself.  By the end, you can tell she’s learned something, but you also wouldn’t put it past her to do it all over again.  Such is life as Julia, as we see almost too clearly.