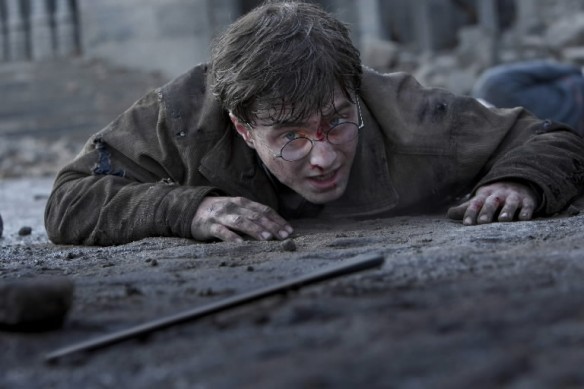 The cheers and tears of millions of fans around the world will signify the end of the era of Potter.  Though the books ended in 2007 (when the fifth film came out), this eighth film installment truly marks the end of J.K. Rowling’s wizard phenomenon.

Harry Potter and the Deathly Hallows: Part 2 abandons much of the atmospheric dread of the past two films in favor of full-on confrontation.  The initial scenes carry that “Calm before the storm” not only narratively but aesthetically as well.  We watch as Snape (Alan Rickman) precedes over fascistic-looking marches at Hogwarts School of Witchcraft and Wizardry with a troubled calm settling on his face.

This scene is preceded by the one that ended the last film, which shows Voldemort (Ralph Fiennes) obtaining the Elder Wand.  (This may be a good time to note that this review assumes that you have some grasp on Rowling’s mythology.  It’s a good time to stop reading if you don’t.)  Once those two set the dark tone, we jump immediately back to the beach where we left Harry, Ron and Hermione (Daniel Radcliffe, Rupert Grint, and Emma Watson)  at the end of Part 1.

Director David Yates keeps the film moving from there.  The heroes are still after those horcruxes (pieces of Voldemort’s soul), and Yates handles the break-in at the goblin bank Gringotts to obtain one of them perfectly.  The white dragon that Harry and company encounter there is startlingly realistic. 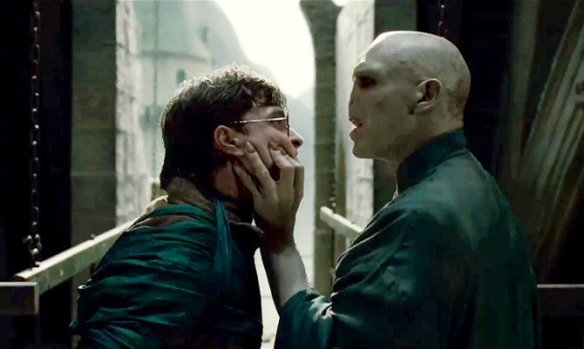 The bulk of this film, though, is dedicated to the Battle at Hogwarts.  Though Part 1 sometimes plodded through the proceedings and felt a bit tedious, you’ll be glad the best part of the book got its own movie.  The battle is filmed with the epic scope of Lord of the Rings, signaled by a tremendous showdown between Snape and Professor McGonagall (Maggie Smith.)

I won’t spoil any more of the surprises waiting in this huge sequence, except to say that it loses some steam in the middle.  The adapted script by Steve Kloves makes little room for anyone but Harry, and it feels like we’re missing out.  Radcliffe has grown tremendously into this character, but Harry was never the most interesting character in the books.  The deaths of several prominent characters are shown after the fact, and since some of them haven’t surfaced much at all they can feel glossed over.

That being said, there is some fine adaptation by Kloves in many of the scenes.  Fiennes finally gets the screen time to flex his masterful acting muscles as Lord Voldemort.  The way he flutters frantically and frequently turns into the camera is an actor and a director coming to a perfect understanding of this character.

Voldemort assaults Hogwarts with everything he has, and the stakes consistently feel high.  There are many jaw-dropping sequences, but they work because the movie mixes it with sincere emotion.  Radcliffe, Grint, and Watson have been groomed into fine young performers in this series.  The rest of the British acting royalty in this installment, from Helena Bonham Carter to Michael Gambon and especially Alan Rickman, steal scenes just by being on camera.

Yates and company hold nothing back precisely because this is the end of their time with Harry as well.  A disarming flashback sequence interrupts the big battle, shedding devastating new light on a character as well as transporting us back to some of the series’ finest moments.  Such an interruption would be a fault if it were in any other movie, but here it feels right.

The humorous fade to the book’s touching denouement ends this movie and the Harry Potter series on the right note.  Yates was responsible for helping this series to fully grow up, and he carries it swiftly to the finish line without milking it for melodrama or dragging it out.  What imperfections the movie does have fade away in these final emotional scenes, when the fans who stood so loyally by their fiction get the ending they hesitantly expected and most certainly deserved.

2 thoughts on “REVIEW: Harry Potter and the Deathly Hallows: Part 2”