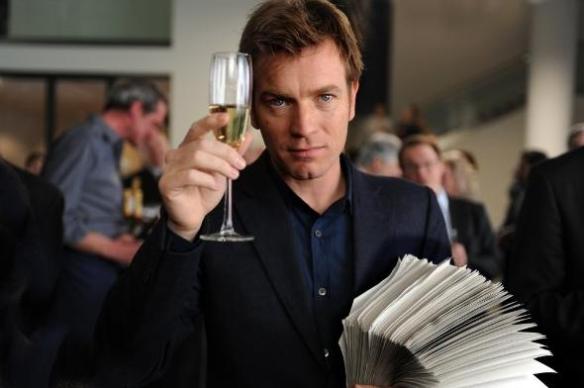 It is wise advice to be told as a storyteller to separate personal affairs and creative work if you are looking to tell a good story. But if you are looking to tell a great story, then making your work personal is exactly what you want to do. Roman Polanski, a nearly 80 year old filmmaker publicly known for currently being placed under house arrest for a sex scandal that happened back in the 70’s with a 13 year old girl, does something like that.

The Ghost Writer is film is by no means Polanski’s personal film, nothing in the likes of Woody Allen’s Whatever Works which in a way is his firm defense on being charged with molesting his 7 year old adopted daughter and later marrying wife’s biological daughter. In no ways does Polanski involve himself in the politics of the film, nor does he allow that sort of thing to distract from the story, but politics and controversy are nonetheless haunting this somber political thriller much like Polanski’s ghastly past must haunt him. His familiarity with scandal may be the reason this film is done so authentically.

Taking place in modern times, amidst the American involvement in the Middle East and torture crimes really bumming everybody out, The Ghost Writer is a fresh breth of relevance, even if it is a little hard to swallow. The nameless “the Ghost” (Ewan McGregor) is hired to finish the memoirs for the former British Prime Minister Adam Lang (Pierce Brosnan) after the last writer washed up suspiciously on Lang’s beach of his Massachusetts island getaway. A dubious task indeed, but the money is killer and the Ghost has nothing else tying him down at the time, a typical journo who is boozy, unkempt miserable played pitch perfect by McGregor.

Unfortunately he takes the job before the big news breaks. Lang is wanted for allowing torture and war crimes, which is only a part of the political conspiracy that makes Lang’s character and hub such a hatch for mystery. The heroin has too little interest in politics to pry to heavily, but his passion for telling a good story, curiosity and publishers hounding him to get some juice to help sell the book drive the Ghost to get the goods by putting his life on the line to unravel the twisted conspiracy theories.

Any connections to Tony Blair are not to be ingnored. Any connections to Roman Polanski should also not be ignored. In the end he made a film about a once adored leader, now caught up in controversy and loathed, who fears imprisonment and burrows himself in house arrest in a wealthy getaway. Whether Polanski is interested in his own politics or the current political climate is quite unclear, but what is clear is that ‘Writer’ is blurred perfectly and delivered in a tension more chilling than the cold North Atlantic breeze that cools the mood as the story heats up.

While it may not be a masterpiece of a thriller or some Hitchcock callback, it’s something precise. Where Scorsese’s twisty thriller this year took us back in time and played with our minds, Polanski’s film was relevant, modern and minimalistic in style. It is less cinematic, yet still engaging even if it is slowly paced. There is some quality to it, a dreary gloom and fine sharpness that seem to keep everything feeling very tangible or factual, making it feel like at times you aren’t even watching a movie, maybe just the ghost of one.

3 thoughts on “REVIEW: The Ghost Writer”