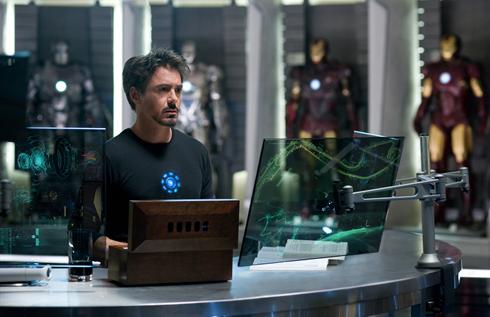 The thing that made the first Iron Man film such a hit in the summer of 2008 was how much of a fresh breath of air it was.  Here you had Roberty Downey Jr., a washed-up ex-convict of a small-time actor stepping into the iron-clad suit of a summer blockbuster.  Mixing that with a unique screenplay, a dynamic cast and the action-ready direction of Jon Favreau, and you had yourself an offbeat charmer of a superhero movie.  Sadly, that charm was overshadowed by the brilliance of technique and ultimate reinvention of the superhero movie in Christopher Nolan’s The Dark Knight.

With the inevitable sequel, we find no genre contenders to the pathos-driven narcissism of Tony Stark this summer.  Downey is now a bona fide superstar, thanks in no part to the revitalization his career received from the first film in this now-franchise.  Now that everything was done in the first one, as is the problem with most unique first installments, not much of it feels new in the sequel, Downey included.

Don’t get me wrong, he is without a doubt the best thing about the movie.  His ability to over-talk and speak with his glazed stares in unmatched.  However, this movie lacks the spark of the original and stretches itself too thin over too many all-important components for a  sequel.

The primary violation of this film is in the villains.  Why (Why?!) must there always be too many villains in super-hero sequels?  This film has two primary villains, and sets up a third by the end without really giving any meaning to them.  Though the villains are all played by great actors- Mickey Rourke, Sam Rockwell, Samuel L. Jackson- they don’t get enough screen time to justify having these talents play them, let alone having them in the movie in the first place.

New additions to this franchise include a notable replacement.  Don Cheadle steps in for Terrence Howard as Tony Stark’s military colleague Lt. James Rhodes.  Cheadle is pure cheese in the role, and was totally unbelievable as a second Iron Man.  Though he can act, this was just not the right part for him.

Also added into the mix are Scarlett Johansson and the three aforementioned villains. I’m proud to say that they all deliver.  Johansson does what she can with an underdeveloped character by kicking ass in her one action scene.   I was worried about Rourke’s accent in the trailer, but his speaking is kept to a welcome minimum, and he adds such grit to his character that it almost makes him cool.  Jackson and Rockwell are reliably superb, knowing when to go for laughs and when to pull the carpet out from under the viewer for laughing.  They were all a treat to watch.

The plot of this installment does focus on the moral dilemma of the American super hero.  Stark is staunchly capitalist, refusing to turn over his Iron Man suit to the federal government.  In these modern times when Wall Street is still viewed as evil, it was refreshing to see a positive view on someone who was rich and powerful.

This, however, does not excuse the outdated fear-mongering plot line present in the film.  While I have no problem whatsoever portraying a capitalist as a protagonist, I do have a problem using an extremely outdated “technology from the Russians will take over our culture” plot line.  Is this really where we’re at more than 15 years after the Berlin Wall fell?  They make a Republican good guy just to throw it all away on more “tear down this wall!” crap?  Please.

Thankfully, story in this film is kept to a minimum.  The action sequences are all fairly impressive, the best of which is the race track one featured in the trailer and the worst of which is a terrible mess where a drunk Stark and his newly-suited friend Rhodes duke it out in his mansion.  The former is a perfect example of how to blend menacing characters (Rourke) with suspense and humor (Downey Jr.).  The latter is anything but.

As far as summer movies go, this one is a good warm up.  It fires the opening flare for the box office races to begin, and will count it’s doe while the other thoroughbreds of June and July compete.  Sadly, this also means it doesn’t’ really get to compete in the race.