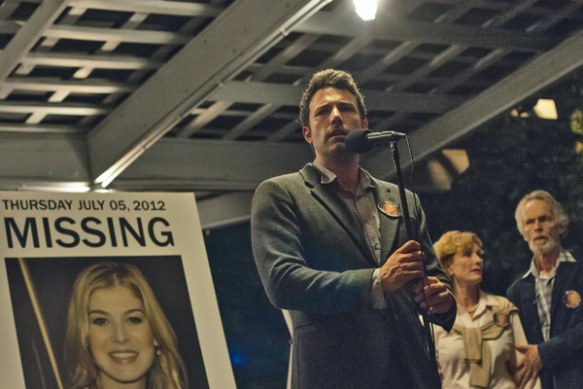 There are many, many spoilers in this review.

Amy is missing, yes.  Her blood is at her and her husband’s home along with a shattered glass table and an open front door.  Her porcelain skin, glowing smile and flowing golden hair is plastered desperately on “Missing” billboards and posters by her loved ones.  The media quickly catches Missing White Woman Syndrome and flocks to the scene to revel in and exploit the spectacle.  They want more blood, her husband’s blood, and the police are gradually running out of reasons not to give it to them.

None of them seem willing (or able) to fathom that Amy (Rosamund Pike) would flee on her own free will, let alone her other, more sociopathic impulses. It takes her clumsy, baffled husband Nick (Ben Affleck) a while to realize he’s ensnared in an intricate, sadistic web by his wife.  However, she’s also caught in a different but equally sinister web with everyone else in the movie, one woven by David Fincher and Gillian Flynn.

Fincher’s films are often so unrelentingly dark in visual and narrative tone that the sources of light are narrow but noticeable. There is a lot of that varied, artificial light in Gone Girl – the flashing bulbs of news photographers, the probing beams of police detective flashlights, the ugly warmth of make-shift studio lighting, the unnatural tint emanating from both interrogation rooms and hospital examination rooms.  However, like in Zodiac, one of the movie’s most memorable sequences happens in broad daylight. 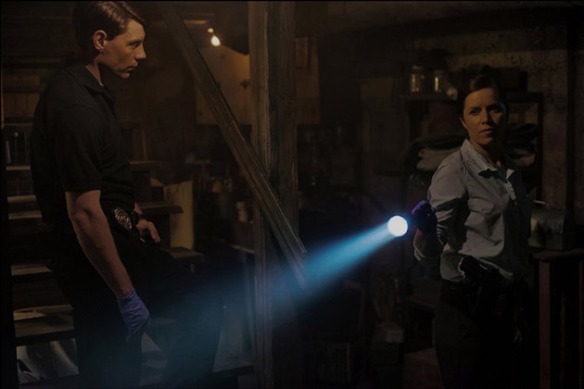 When Amy speeds down sunny Midwestern highways and weaves in and out of grocery store aisles while explaining her sinister plan in voiceover, Gone Girl is jolted to cruel, intoxicating life.  The most quoted portion of Flynn’s novel, “The Cool Girl” monologue, is recited in this sequence over the movie’s big reveal that Amy wants to be gone and relish in Nick’s suffering from afar.

Nick does some very stupid things while being investigated by the police, like trying to hide his affair with his college-aged girlfriend and smiling while his wife is missing.  He does them because he feels like a caged animal and doesn’t know how to act.  He doesn’t want to look bad in the public eye.  Flynn and Fincher cast an often dementedly humorous spotlight on his suffering, and Affleck’s screen presence is crucial to that.

Discussing his casting in Film Comment, Fincher said he wanted Affleck partly because the public scrutiny Nick faces is something the actor knows by experience.   However, that’s something every movie star faces.  What Fincher was also looking for was a movie star with frat boy undertones who was willing to look like a fool over and over and over.  (Also, he looks a bit like Scott Peterson). Nick’s twin sister Margo (Carrie Coon, channeling Janeane Garofalo-like snark) tries to keep him on track, but Amy wraps her up in the game too.

Gone Girl is about rebelling against a seemingly forced narrative.  It starts out as a somewhat sluggish, predictable mystery, transforms into a twisted comedy and then becomes a kind of hyperreal horror movie.  We think we’ve seen enough Law & Order to know where this is going, and so do the police and the news crews.  Characters watch a mock Nancy Grace-type show that calls for Nick’s head either disgusted or filled with psychotic joy. 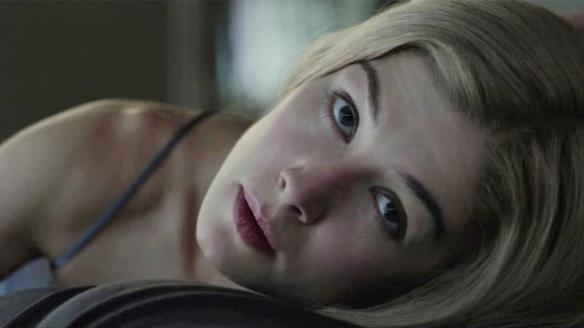 Procedural detective stories and talking head crime shows don’t really prepare you for a character like Amy.  Pike instills her constantly shifting, demented performance art of a life with a deceptive stillness.  Her brief outbursts of rage are never as frightening as her silent, more calculated acts of evil.

In my favorite shot in the movie, Amy is laying on an inflatable lounge chair in a tiny pool at a cheap resort in the Ozarks, chomping on Fritos.  This shot comes after she has explained why she fled her life and framed her husband for her murder, after she calmly drains her own blood, smears it on the kitchen floor and wipes it up just enough so that it looks like it’s being covered up.  It’s a funny juxtaposition, and a good illustration of the movie’s strange, twisted vibe.

Talking about the movie’s tone in that same Film Comment interview, Fincher says:

There was a National Lampoon record in the mid-Seventies called That’s Not Funny, That’s Sick. That’s kind of the tone of the movie. If we play it too earnest and sincere, then it’s tragedy, but if we go with the absurdity of it, I think it can walk a satirical line.

Nick and Amy are at the center of a troubled suburban couple story filtered through a mixture of Psycho and Fincher’s own The Game.  They’re both laid off writers who returned to the Midwest because of Nick’s sick mom.  Flashbacks to their New York romance are filmed as dreamlike interludes in the increasingly miserable investigation.  These scenes are accompanied by narration from Amy’s diary, and they feel a little too cute, sexy and fun long before she reveals herself to be a very, very unreliable narrator.

Flynn’s prose peeled back Amy’s scheme with giddy, contagious suspense, and her screenplay condenses and reworks that story to be more deliberately paced if no less ruthless.  However, additional scenes, especially some of the earlier investigation portions, should have been condensed even more.  Still, Gone Girl covers a lot of ground without ever overstaying its welcome.  Fincher connects the frantic transformations in the story by instilling it with a playfully absurd menace, creating a cinematic world as vivid and horrifying as almost anything else I’ve seen this year.