The Skeleton Twins- Any enthusiasm I have for Bill Hader and Kristen Wiig’s dramatic and comedic chemistry in The Skeleton Twins is drowned out by the rest of this unrelentingly sloppy movie.  Hader plays Milo, who returns home to live with his unhappily married sister Maggie (Wiig) after attempting suicide.  There are, of course, dark family secrets, vast pools of resentment, a dead parent, a shitty parent and plenty of other dysfunctional family cliches.  The script, co-written by Mark Heyman and the director Craig Johnson, shifts tone so abruptly that it’s impossible to be invested in the story they’re trying to tell.

Hader and Wiig have undeniable chemistry and cast a wide net of emotions to try and make this script work.  A couple of times they are successful.  There’s an absolutely hysterical scene where Milo goes to the dentist’s office where Maggie works and they get high on laughing gas and ramble.  It’s also one of the few times where the movie’s deep undercurrent of sadness actually contributes something to the story and doesn’t seem overdone. When they talk to each other in this scene, their problems seem unforced because Johnson lets it unfold organically.  The other conflicts largely stem from sex, which Milo has with his old high school English teacher and Maggie has with her scuba instructor.  It’s aggressive, unearned, empty misery.  Grade: C-

The Drop – The Drop is much funnier than its self-serious crime drama facade led me to believe it would be.  A movie that crams Tom Hardy, James Gandolfini and Matthias Schoenaerts together is already overflowing with gritty masculinity, so the levity in Dennis Lehane’s approach in the screenplay is very, very welcome.

Hardy plays Bob, a quiet bartender who inches closer and closer to a violent criminal enterprise he wants to avoid.  The bar he works at is a place that holds mob cash, and a misguided attempt to rob it awakens a slew of one-note criminal monsters.  What makes The Drop work as well as it does is Lehane and director Michaël R. Roskam’s patience in letting the central characters lash out against the movie’s seedy underbelly and its fairly predictable story.  There’s an unforced warmth to Hardy’s chemistry with Noomi Rapace that partially overshadows the fact that she’s playing yet another underdeveloped female character in a crime drama.  Thankfully much of the macho posturing is played for laughs, and it was particularly nice to see Gandolfini give one last funny tough guy performance.  Grade: B 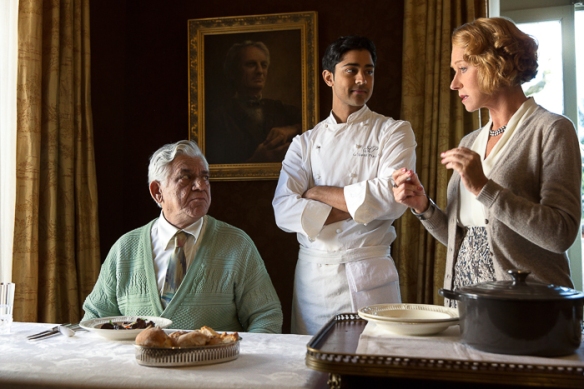 The Hundred-Foot Journey is so relentless in its attempt to reassure the audience that there will be a happy ending that the only reason to watch it is to bask in the gloriously filmed dishes each restaurant produces.  They exist in a separate world from the generically assembled story and the characters who inhabit it, although there are a few charming scenes between Mirren and the other restaurant owner, played by Om Puri.  The main character, Hassan (Manish Dayal), has a very uninteresting arc that only gets in the way of that.  Grade: D+