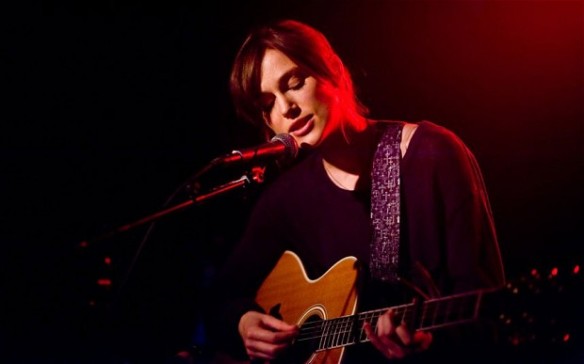 Begin Again is a cute, light-hearted musical with just enough bite to avoid being irredeemably fluffy. It’s a movie where I knew everyone would be all right at the end, because the main characters’ redemption arcs are so unchallenged that the story would work whether they score a hit record or not.   Dan (Mark Ruffalo) is a heavy drinking, has-been record executive with a crumbling marriage.   While down on his luck and drunk at an open mic night, he discovers Greta (Keira Knightley), a recently dumped singer/songwriter whose music becomes the driving force of their uplift (and ours).

Those character archetypes sound unbearably cliché, but writer/director John Carney’s disinterest in mining the narrative for drama proves to be an asset here. Ruffalo and Knightley have enough chemistry to make their recording sessions interesting, and it was surprising to see how exactly their relationship conflicts settled.

I use the word conflict very, very lightly. Dan is exactly the kind of character who, in almost any other widely released movie, would do something self-destructive in the third act before being re-embraced. (Spoilers) Instead, he and Greta knock the record deal out of the park, and though there are hints of a romance, the movie avoids it.  It would be too messy, and the characters are supposed to be messy enough already.   Instead, she avoids rekindling things with her rock star ex-boyfriend (Adam Levine) and Dan patches things up with his wife (Catherine Keener).  His relationship with his daughter (Hailee Steinfeld) also blossoms because of her developing prowess on the guitar.

In Begin Again, music is a cure-all to every single thing, or at least a cure-all for the concerns of these fairly well-off people. Carney has so much faith in the songs that the rest of the movie feels incidental.   Because Dan’s company refuses to back an artist without a demo, he and Greta decide to assemble a band and record around New York City.   Some of these scenes work even though they don’t come off quite as spontaneously as they were intended to, simply because the songs are still quite good.

The best moment in the movie is the second time we see Greta perform at that open mic night, when the movie fuses with Ruffalo’s point of view and we watch him, instrument by instrument, build the rest of a song around her voice and guitar.   The rest of Begin Again isn’t as interested in showing the process of creativity as it is in the end result. It’s a meandering, pleasant experience that never really lives up to that early scene.