The last shot of Richard Linklater’s 1993 film Dazed and Confused is the open road from the point of view of a high school senior-to-be. He’s one of the dozens of characters weaving in and out of that sprawling recreation of a single Texas day in 1976, maybe even the closest the movie has to a main character.  And like so many other characters in the movie, I remember things about him, and not his name (I had to look up that it was Randall).

I remember how he slings his arm around an incoming freshman and treats him like a little brother, and how that freshman’s wide eyes take everything in as he tries to figure out how to act cool around the big kids. Then there’s the moment where Randall “Pink” Floyd hangs out on a football field drunk and stoned with his friends, enveloped by the stars in the sky. His journey in the movie is deciding whether or not to embrace being labeled a slacker.

Several other Linklater films, some of which I haven’t seen, have a similar aim (or aimlessness) as Dazed and Confused. They capture and enhance the minutia of his characters’ existences by constricting the amount of time the narrative observes them (usually 24 hours). Dazed is a much broader canvas, while each installment of his Before trilogy spends a day and night with the same couple every nine years. What’s always there, besides the time constraint, is a patient empathy that allows the moments I mentioned above to be conveyed in such a memorable way. 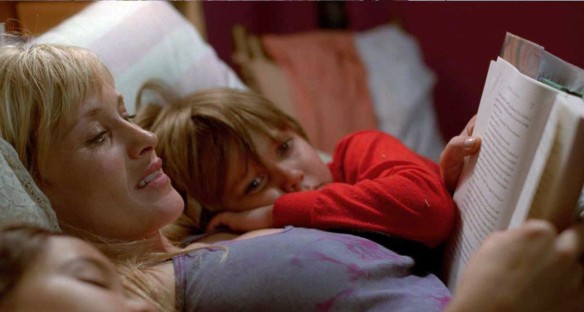 In Boyhood, Linklater is still attuned to the ways his characters move through and change with the world around them, but instead of distilling a single moment in time (Texas in the ‘70s), it’s the same characters creating ripples across a decade (Texas in the early 21st century). The most dramatic changes, physically if nothing else, are with the central character Mason (Ellar Coltrane) and his sister Samantha (Lorelei Linklater).

The movie’s marketing hype is built around the fact that it was filmed over the span of 12 years, and that we watch these children and adults grow and age moment to moment in rapid succession. What doesn’t change is the way Linklater observes them, the way he captures the siblings and their divorced parents (Patricia Arquette and Ethan Hawke) in a series of life milestones and everydays. Other characters appear and vanish in a matter of minutes, most never to reappear for the rest of the movie.

Mason’s conversation with a random girl from his middle school is given several minutes of screen time and shot in a long, continuous take, much like many of the scenes in the Before movies. They talk about an upcoming party that a girl who likes him is going to, and what he’s reading, and where he’s walking. She’s not in the rest of the movie, but she doesn’t just exist just to develop him, either.   Even though time is progressing at the same rate as the characters, Linklater is still focused on what it’s like to exist in a certain place at a certain time.

There is a great sense of nostalgia for the recent past in the movie, and I imagine it’s similar to what many baby boomers feel while watching Dazed and Confused. This is because the characters are often developed by their relationship to the pop culture of and gadgets of the time period (a different iPod or cell phone seems to casually accompany each of Mason’s varying haircuts).   A lot of Boyhood’s impact is reliant on steadily evolving characters being shot with an aesthetic sameness. It was shot on film in the midst of the digital revolution, which allows the look to remain consistent as Mason grows from an elementary schooler who plays with a dead bird in the dirt to a college freshman who does mushrooms before hiking.

The relentlessness of time’s progression builds a connection with Mason and his family that is unlike anything I’ve seen in a movie before. A gathering after his graduation ceremony is punctuated with a moment between his mother and father where they lock eyes and wonder silently how it all happened so fast. This interaction is incredibly affecting because I almost felt the same way they do.

Of course, Boyhood’s expansive narrative is filled with moments just as poignant and impactful as this.   There are incredibly shocking, sad ones, like how he sees his mother lying on the ground after being abused by his alcoholic first stepfather, or how she breaks down crying when her daughter asks her what they’re going to do after she leaves him.   Bigger, more dramatic moments like that are more effective because they burst out of such normalcy, like the way Mason muses about Life’s Big Questions with a teenager’s all-knowing sense of importance, or how he and his sister join his dad and stepmom in impromptu song.

Mason and Samantha’s father is not as consistent a presence in their lives as their mother. He roars into the movie in a vintage GTO and Hawke plays him with an overabundance of energy. He’s afforded a freedom that Mason’s mother never is because she raises their children as well as works, a dynamic both this movie and last year’s Before Midnight underline several times. By the end, though, he’s a calmer, minivan driving family man, and she’s a single psychology professor.   The last time we see him he doles out wisdom to his son after a breakup, while her final moments are spent crying in her apartment as Mason leaves for college.

Arquette gives the best performance in Boyhood, and ending her character on such an unsatisfying note is a very minor setback in an otherwise incredibly moving and engaging movie. Its title may suggest a singular experience, but Boyhood is about motherhood, fatherhood and sisterhood too.