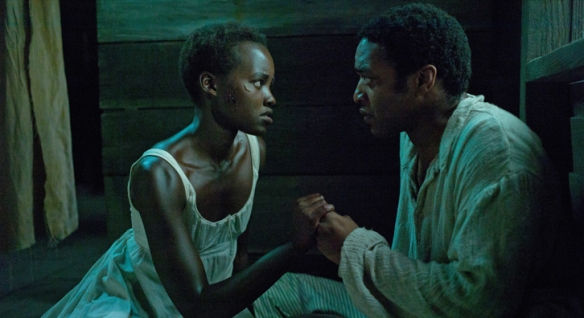 Connecting 12 Years a Slave immediately to its Oscar buzz because of when a studio chose to release it would be a disservice to it.  To put it simply, this is the most powerful film about American slavery that I’ve ever seen, and diminishing that accomplishment by asking if the white male establishment of the Academy can handle it enough to nominate it for anything is at the bottom of my list.

This is also by far the most narrative-driven of McQueen’s films, but only to a point.  Though time is directly mentioned in the title, it’s not marked in any way once Solomon Northup (Chiwetel Ejiofer) is abducted from the North and sold into slavery.  The South of this movie is a claustrophobic, disorienting and infinite web of swamps and forests.  Even the wide-open cotton fields of the plantations seem isolated, making the barbaric acts seem cut off from the civilized world.

12 Years a Slave follows the favorite story arc of Hitchcock: an innocent man wrongfully accused.  Northup is framed as being a runaway slave instead of a free man, and so this movie is about so much more than his quest to return north to his family.  It’s about how a man used to dignity wakes up in chains; how he mistakes himself for equal and demands justice, only to be beaten, whipped and stripped in a dark prison cell.  It’s about the way he tries to cover his body when ordered to scrub himself outside in a muddy pen, and how the white suds clash with his black skin and the red gashes on his back.

Slowly, Solomon realizes the hopelessness of his situation.  He makes acquaintances or potential allies, and then in the next scene they are torn apart by commerce.  He plays the violin to drown out the sound of a mother being sold to a different owner than her children.  Sometimes there are acts of defiance, like when a young white man (Paul Dano) just wants an excuse to whip him, but Northup won’t yield.  He pins the scrawny sadist to the ground, making him squeal and apologize and wait until his superiority is restored.

Then comes torture.  Northup strung from a tree, his toes barely sticking in the mud, his hands bound behind his back.  The camera watches this suffering from a distance.  Slave children run around with their parents in the background, not letting the man’s predicament spoil what little free time they have.  The plantation owner’s wife comes out to gawk, then retreats when the sight disgusts her enough.  There is also a brave act of kindness, as a woman runs up to him, gives him a gulp of water, then darts away before she’s spotted.

All of this takes place in the movie’s first half, before Northup is even sold to the “cruel” slave owner Edwin Epps (Michael Fassbender).   Northup faces a fresh hell here as well, but he is just one of many now.  There is Patsy (Lupita Nyong’o), a young woman who catches Epps’ lustful eye, much to the demented jealousy of his wife (Sarah Paulson).  In another extended scene of brutality, this one filmed in an almost unbearably close proximity to the carnage, Patsy’s back is turned to a cracked, bleeding pulp because she left without permission to get some soap to clean herself.

So few movies are made about this American travesty, even fewer of them this unflinching.  Quentin Tarantino’s Django Unchained came somewhat close last year, presenting the horrors of slavery in the context of a pulpy, genre-mashing revenge fantasy.  That movie’s impact made more of a stylistic splash, though, and little else.  I didn’t leave the theater in shock at what I’d witnessed like I did here, because it was made palatable.

Only when Brad Pitt’s character sauntered on the screen near the end and lectured Epps did McQueen and screenwriter John Ridley appear to be trying to put me at ease in any way.  It was the only time they compromised, the only time the movie gave in to the white gaze.  Even then, there are those countless other horrific and humane moments that preceded it that will be imprinted on my mind forever.