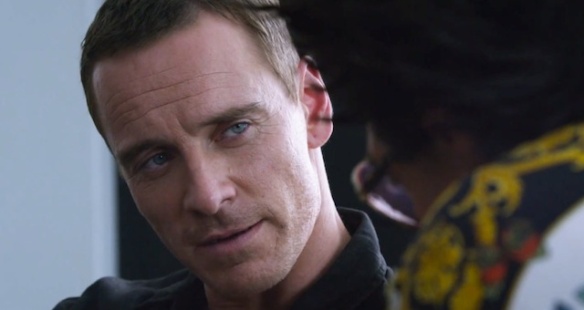 Cormac McCarthy never ceases to come up with flinch-inducing ways to kill, or elegant ways to philosophize about it.  In No Country for Old Men, there was the cattle-gun-wielding assassin offset by the world-weary sheriff.  In Blood Meridian, massacre after massacre in a blood-soaked desert and a ranting, apocalyptic Judge.  Then there was the actual apocalypse in The Road, where a man and his son stumble upon a den of cannibals with half-eaten naked people locked in a cellar.  They talk about keeping a moral fire alive in a world made of ash.

The Counselor is McCarthy’s first outing as a screenwriter, but it is filled with the kind of boundless evil and morally compromised good of his novels.  The rich language in the movie may be off-putting to many viewers, just as it was in David Cronenberg’s adaptation of Cosmopolis.   Though these are commercial movies, they have very distinct and unsentimental voices behind them that illustrate a worldview beyond realism.

If McCarthy is a man obsessed with chronicling the poetry of violence, he is also equally obsessed with doing so on the U.S./Mexico border.  There are also stops in places like Boise and London here, but most of the plot is rooted along that tumultuous cultural and economical dividing line.

McCarthy and director Ridley Scott relish in clashing this barren landscape with decadence.  Early on a club owner (Javier Bardem) and his wife (Cameron Diaz) watch their pet cheetahs hunt jackrabbits in the desert, leaning on their sports cars and drinking champagne.  Nearly every interior location, from a mansion to a jail cell to a Mexican dive bar, feels isolated, like a fort to protect its inhabitants from the wild.

There is no protection, though.  There are ambivalent forces working behind the scenes of a $20 million drug deal that has drawn the attention of The Counselor (Michael Fassbender).  It’s clear from the beginning that though he is corrupted by greed, he is a kind man, and hopelessly naive of humanity’s capacity for cruelty.  Oh how he learns.

A lot of predictable things happen during Counselor’s barbaric lesson.  The drug deal is of course botched, and most of the key players are chased down and killed like those rabbits.  Scott obviously relishes in the showier, more brutal sequences, but he also slows the pace to a crawl.  Some of the confrontations feel out of place and unnecessary, but all of it unfolds with an unsettling steadiness.  For every death, there seems to be an elegiac monologue to accompany if not justify it.

At its core, The Counselor is a movie about men who make the stupid mistake of underestimating women.  To Counselor and Reiner (Bardem) women are romantic entanglements beyond understanding, but they think they can be left out just like they are in most crime stories.  The movie opens with a sexy back-and-forth between Counselor and Laura (Penélope Cruz).  Shot in intimate close-up underneath their bed sheets, it is a surprisingly tender and romantic moment given my past experience with McCarthy. This moment also serves to clash with Malkina (Diaz), a post-modern femme fatale who is ultimately responsible for much of the movie’s cruelty.

Diaz tears through the movie with an almost operatic wickedness.  She knows how undervalued and overlooked she is in this world, where she and Reiner’s outlandish high fashion is almost carnivalesque.  To illustrate just how far out of reach her character is to the men (and the audience), Scott and McCarthy have her have sex with a car.

It’s a bizarre, needless scene, no matter how unflinchingly it’s portrayed.  Reiner’s description of her vagina on the windshield (like a catfish sucking at a tank), adds further to its hilarity.  It’s also the most literal manifestation of materialism that is probably possible. If Laura and Counselor are hopeless romantics, Reiner and Malkina are… not.

There is no place for romance in this world, unless of course you romanticize death (or cars).  Even if you do everything right and get out of town (like Brad Pitt’s character), you still aren’t guaranteed to survive.  There’s also a large possibility that if you survive, you won’t want to.  This is a movie where people who constantly think and talk about death are confronted with it.  The movie occasionally registers as empty, but the unremitting certainty that every action is executed with creates a space where howls of pain and struggle are just cries into a void.