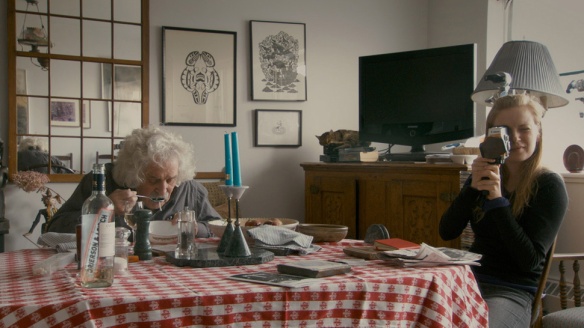 Hopefully you go into Sarah Polley’s Stories We Tell knowing nothing about what happens. In the interest of preserving that for you, do not read past this sentence unless you’ve seen this beguiling meta-documentary.

Stories We Tell is filmmaking of a very personal nature while also being a relentless interrogation of the documentary form.  Polley interviews her friends and family about her deceased mother, filming her process as part of the process.  Along the way she acknowledges the impossibility of objectivity while attempting to achieve it, and throws in some aesthetic twists too.

It’s a brain-bending, somewhat pretentious-seeming exercise, but the end result is very nearly a perfect mystery.  The central question at that mystery’s heart is: What does it mean to know a person if another acquaintance knew them as someone else entirely?  Secrets about Polley’s mother Diane unfold in uneven, surprising directions, like a sailor’s knot.  Mixing home movie footage with footage she filmed to look like one, she matches the intricacy of her mother’s trickery blow for blow with the different ways she presents the story.  It is less a profile of Diane Polley then a chronicling of the filmmaker’s attempt to know her more.

However, it is impossible to come away from the movie without feeling Diane’s presence.  Her perspective’s absence haunts the movie more than any testimony, and her identity seems illusive no matter how many revelations come out of the interviews and recreations.

Polley’s directing here is more sustained than in either of her previous two films, Away With Her and last year’s Take This Waltz.  The impossibility of some of the archive footage is clear throughout, but this is not the point.  This is a film about the need to film, and about the power of a camera to peer into a person and present a story’s many facets without explicitly making a case.

“It seems I’m filming my life in order to have a life to film, like some primitive organism that somehow nourishes itself by devouring itself, growing as it diminishes,” the documentary filmmaker Ross McElwee remarked in his 1985 film Sherman’s March.

Polley’s own film is staked somewhere between that sentiment, Kurosawa’s Rashomon and the illusive trappings of Welles’ F for Fake.  She attempts to give equal weight to the different stories people tell about her mother, most notably contrasting her mother’s husband and her lover, who turns out to be Sarah’s father.   However, she chooses what footage to show and how to combine the various storytelling methods, just as she chose to create fake home video footage for much of the talking head interviews.  In her deception she reveals just as much about the power of aesthetic artifice as she does about her family’s secrets.

Brothers, sisters, friends and distant acquaintances all appear in front of the camera. Their nervousness about making their private thoughts public often precedes their actual version of events.  Polley doesn’t pan to herself during these interviews, and her questioning sometimes takes on a very stern tone.  These segments are an ineffective attempt at balancing the very personal nature of the movie.  Her movie gets too knotted up in proving itself in the final scenes.  It becomes a bombardment of different anecdotes that clash with what came before without enhancing it.

This is only really true of the late scenes with Mike Polley, the man who raised her and who she considers her father even if it’s not biological.  It is a small smudge on an otherwise intriguing and engaging plunge into one woman’s enigma of a life.  Perhaps its biggest accomplishment is that it conveys the sense that any of our stories, no matter how personal or seemingly trite, is thrilling if you structure it correctly.