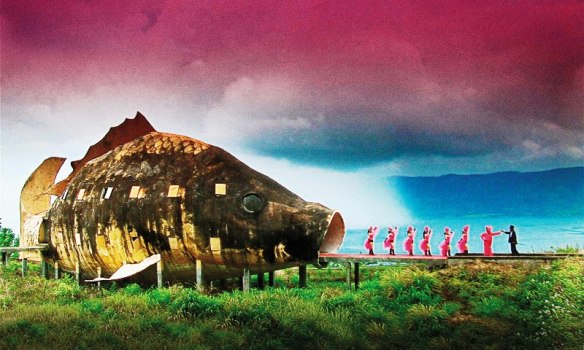 More than 20 of the names on the end credits of The Act of Killing read “Anonymous,” including one of the co-directors.  That the former death squad members at the movie’s center openly admit to and brag about torture, murder and rape makes that anonymity darkly tongue-and-cheek.

The U.S.-backed killing of millions of Indonesians during a military overthrow of their democratic government was never investigated, and many of the death squad members are still viewed as heroes after almost 40 years.  The atrocities they committed in the mid-’60s are not only openly discussed in this documentary, but reenacted.  Director Joshua Oppenheimer spent roughly eight years interviewing and filming this process after provoking them to do it.

Murder is acted out in the dimly lit warehouses of gangster films and with the costumes of John Wayne Westerns and glamorous musicals.  Anwar Congo, the central figure of the documentary responsible for hundreds if not 1,000 deaths, says he was not only inspired by those kinds of Hollywood productions, but pushed to go farther.  The shock value of Oppenheimer’s footage is enhanced by the fact that the killers are willing participants.  They goad each other on and debate specifics of their murders all while being active members of government-sanctioned paramilitary activity.

This is an extraordinary feat of filmmaking.  Several of the reenactments are surreal in their horrific casualness, and made even more startling by the disgusting pride the men have for their work.  For all the grotesque things that Oppenheimer helped uncover, though, the end product feels almost too insular.  Civilians appear as extras in some of the reenactments, and there is one scene where uncomfortable shopkeepers are gently extorted, but the repercussions of the men’s crimes on anyone but themselves are never really seen. 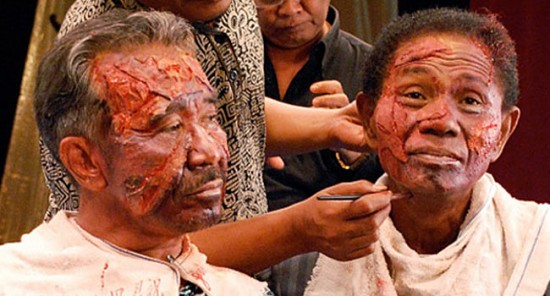 As one of the death squad members remarks during an interview, “War crimes are defined by the winners. I’m a winner.”  The Act of Killing is a story about the winners, and it puts their arrogance on full display. Congo is the only one in the movie who shows any sort of regret or horror at what he’s done.  Although it’s understandable that exploring and reliving such atrocities over an eight-year period would dredge up some semblance of regret, too much of the movie’s two-hour run-time seems dedicated to exploring that regret while simultaneously shaming it.  I plan on watching the uncut three-hour version to see if that situation is put into better context, because it is the only discernible flaw in an otherwise astounding achievement.

In one of the most extravagant reenactments, Congo stages the nightmares that he gets thinking about what he has done.  Other gangsters dress up in ghoulish monster costumes that any high school play production would be proud of as they haunt him with a fog machine while he sleeps.  Then, the movie ends with Congo having some kind of anxiety-driven coughing fit in a location where he beat and strangled dozens of people.  These two scenes perfectly illustrate the broader goals of The Act of Killing: they show an artful imagining and its clash with the actual, a behind-the scenes glimpse into the making of propaganda.  The death squad attempts to make art that reflects their experience, so both are horrific.